As Manchester City and Manchester United fans prepare for the first women's Manchester derby as the Women's Super League kicks off this weekend, our Fan Partner CityXtra take a look at the fixture and it's importance.

What does derby day mean to you? To me it’s the horrible sense of anticipation in the week. The three hours sleep the night before because it’s all you can think of. It’s approaching the ground playing out all the possible scenarios in your head.

But most importantly, it’s the thrill of your team scoring that goal against that team. And that’s what will be played this weekend as Manchester City face Manchester United in the opening game of the WSL season.

The first ever women’s Manchester Derby will take place at the Etihad Stadium this weekend which signals a big step forward for women’s football. So far, over 20,000 tickets have been sold and that’s only likely to grow with the hype surrounding the game building rapidly. It’s set to have a great atmosphere which seems only fitting for one of England’s great rivalries.

So what about the game itself? Manchester United will want to establish themselves as a WSL club and what better game to do that than this weekend. Nick Cushing will have limited knowledge on the style of Casey Stoney’s side so its set to be an interesting battle. 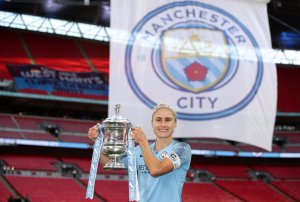 City, who won the FA Cup last year, will go into the game without their key new signing Ellen White after surgery on her knee and number one Karen Bardsley, who has also picked up a knock.

City, however, have incredible strength in depth with Ellie Roebuck proving in pre-season that she’s just as capable in between the sticks. New signing Lee Geum-Min will look to hit the ground running in White’s absence and she’ll likely be partnered by Georgia Stanway who City will be hoping she’s in the same form she was in for the Lionesses.

Another pairing I’m looking forward to seeing is Kiera Walsh and Jill Scott in midfield. The pair we’re magnificent in the summer helping the Lionesses to reach the World Cup semi-finals. Kiera Walsh particularly impressed me with her passing range and her ability to maintain attacks with her pinpoint cross-field balls and she’ll be a key player in any success City get this year. 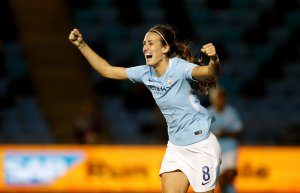 In terms of the defence, I’d imagine new signing Matilde Fidalgo, who has had huge success in Portugal, will start alongside captain Steph Houghton, another new signing Aoife Mannion and Demi Stokes. And they’ll be tasked with stopping the free-scoring Ella Toone who scored 15 goals in 19 appearances in United’s promotion charge last season.

Whatever happens it’s going to be a brilliant spectacle and only a positive for the ever-growing women’s football. But of course, I’m hoping for a 3-0 City win to kickstart the season.