Walter Smith: ‘For me he was the greatest Rangers manager ever.’

Kenny from This Is Ibrox reveals what the former Rangers boss meant to him and why he deserves to be regarded as the club's finest.

Rangers fans have been paying their respects to the late Walter Smith who passed away on Tuesday at the age of 73.

Smith achieved legendary status at Ibrox, winning 21 trophies in total, making him the second most successful Rangers boss ever behind Bill Struth.

He won the latter seven titles of Rangers’ nine-in-a-row run in the 1990s and returned to Ibrox in 2007 to win three more.

As well as those 10 top-flight titles, in two spells as Rangers manager, Smith also led the club to five Scottish Cups and six League Cups as well as to the UEFA Cup final in 2008.

“Walter Smith meant the world to Rangers fans, he was a true Rangers legend,” Kenny from This Is Ibrox tells FansBet.

“To people of my era he was like a father, he was dignified, he led the club well, he always wore a shirt and a tie and he was a man you looked up to. 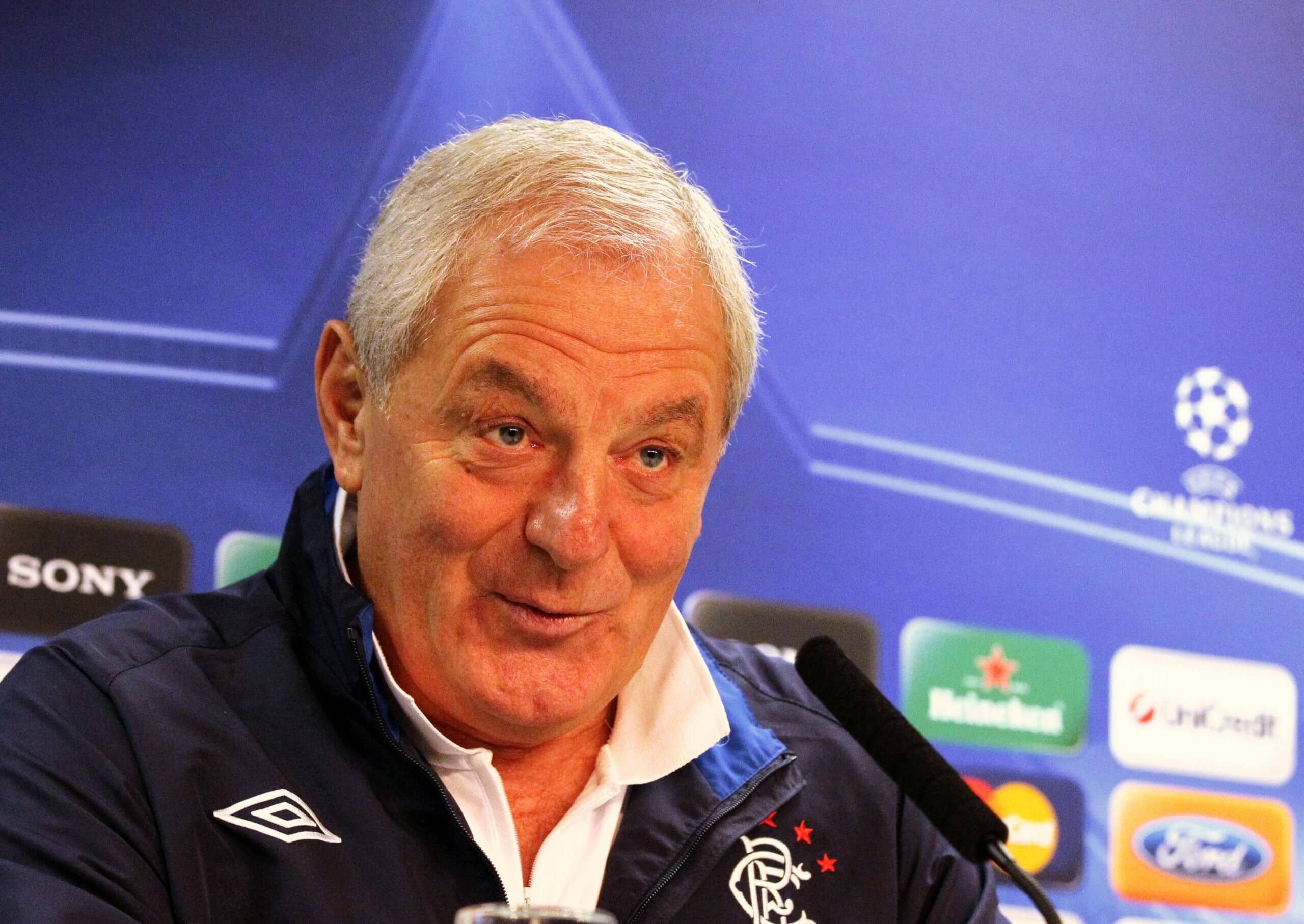 “For me, he was the greatest Rangers manager ever; he took us to 10 league titles, five Scottish Cups, six League Cups and let’s not forget that amazing run in Europe in 2008.”

As a player, Smith’s playing career consisted of two spells as a defender with Dundee United, split by a short time at Dumbarton.

Injury caused his retirement from playing in 1980 and Smith moved into coaching at The Tangerines, working for manager Jim McLean.

Smith also took charge of the Scotland under-18 and under-21 teams, and assisted Scotland manager Alex Ferguson at the 1986 World Cup in Mexico, after it had been announced that he would be moving to Rangers as assistant to Graeme Souness.

After moving from Tannadice to Rangers in 1986 as Souness’ number two, he oversaw a total transformation in the club as the Gers won their first league title win in nine seasons.

And following Souness’ departure to become manager of Liverpool in April of 1991, Smith took sole charge and embarked on a near-decade of dominance – including the domestic treble in 1993 – to equal Celtic’s record of nine successive titles.

Smith also took Rangers to the brink of the Champions League final in 1993, going 10 games without defeat in that campaign and 44 matches unbeaten in all competitions.

💙 “Walter Smith meant the world to every single Rangers fan.”

🤝 “Rest in peace and thank you for the memories.” @deboag83 from @thisisibrox paid tribute to former #RangersFC boss Walter Smith. pic.twitter.com/uWn42fCn70

“Graham Souness brought him to the club as his assistant, which raised many eyebrows at the time,” explains Kenny.

“But when he left following the three-in-a-row season, Walter Smith was given the manager’s job.

“Richard Gough, then club captain, said at the time that the players wanted no other man than Walter to be at the helm and it paid dividends as we went on to win nine-in-a row under his leadership.”

In an effort to secure a record-breaking tenth success going into the 1997/98 campaign, Rangers spent £13m on eight new players, including; Lorenzo Amoruso, Sergio Porrini and Marco Negri.

However, it was announced in October 1997 that Walter Smith would leave Rangers at the end of the season,  a decision that arguably had a negative impact on the side’s form for the remainder of that campaign.

The Gers ultimately lost out on the league title to Celtic on the final day and then lost the 1998 Scottish Cup Final to Hearts a week later, finishing trophyless for the first time in twelve seasons. 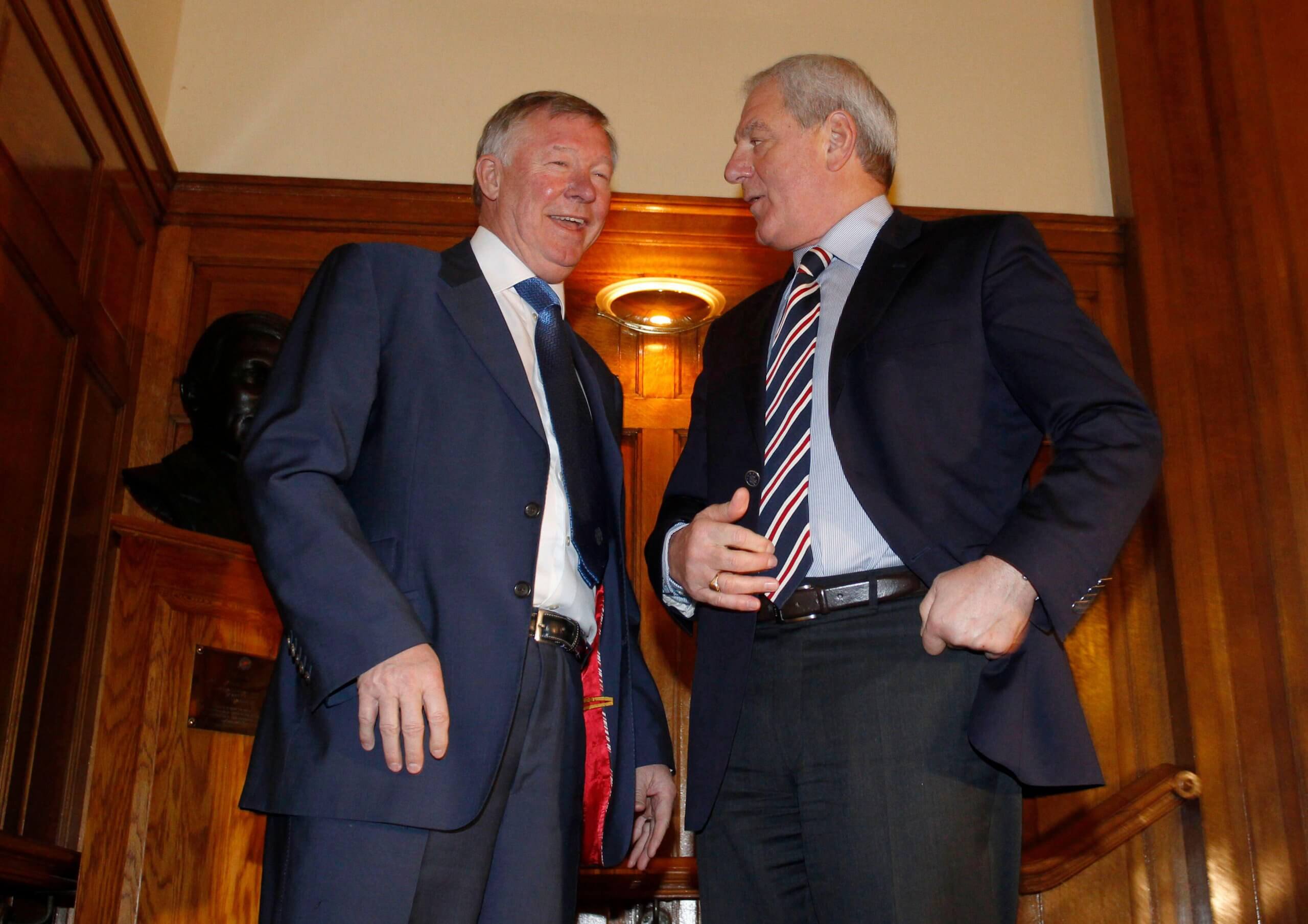 After his departure from Ibrox, Smith would spend four years as manager at Everton, two with Scotland and briefly worked with Sir Alex Ferguson as his assistant at Manchester United in 2004, before being enticed back to Glasgow in 2007.

That season, Rangers embarked on a memorable UEFA Cup adventure after dropping into the competition from the Champions League.

The club progressed to the final, defeating Panathinaikos, Werder Bremen, Sporting Lisbon and Fiorentina along the way.

They lost the final against Zenit St. Petersburg, however, who were managed by former Rangers boss Dick Advocaat.

During his second spell in charge at Ibrox, he delivered three more titles, two Scottish Cups and three League Cups.

“He came back after the Paul Le Guen debacle and led us again to three league titles and also a UEFA Cup run,” says Kenny. 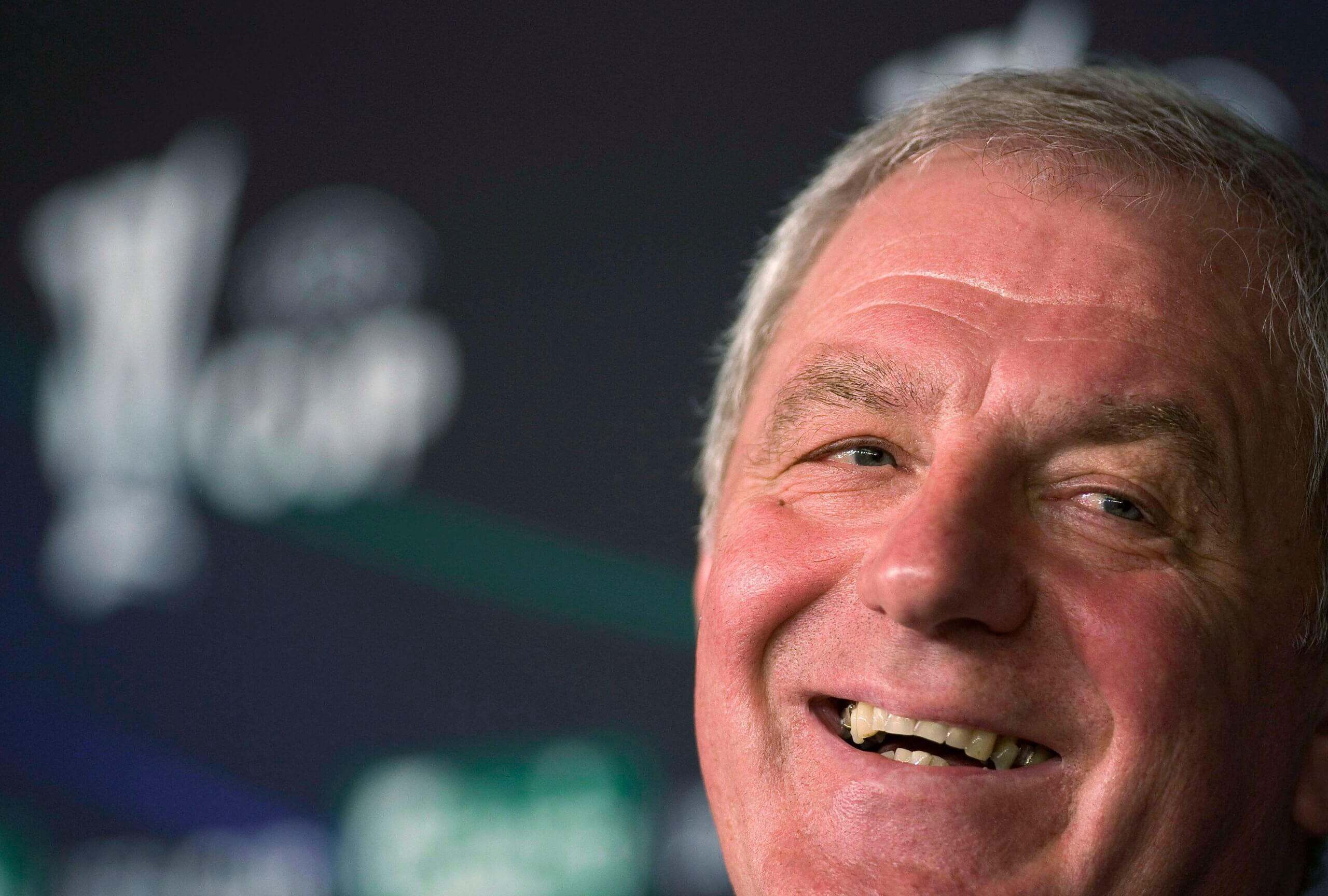 “There are so many great Walter Smith memories to look back on as he ultimately lifted 21 trophies above his head.

“But for me, that image of him, Ally McCoist and Kenny McDowell after Novo’s penalty in Florence will never be forgotten.

“The fact that a true Rangers man had led his club to a European final, I think he knew what it meant for the millions Rangers fans across the world.”

In May 2010, Smith signed a new one-year deal to continue as Rangers manager throughout the 2010/11 campaign.

He stated that it would be his last as Rangers manager with club legend Ally McCoist taking control thereafter.

In his final campaign as manager, Smith led Rangers to another domestic double, winning the League Cup and the club’s 54th league championship. 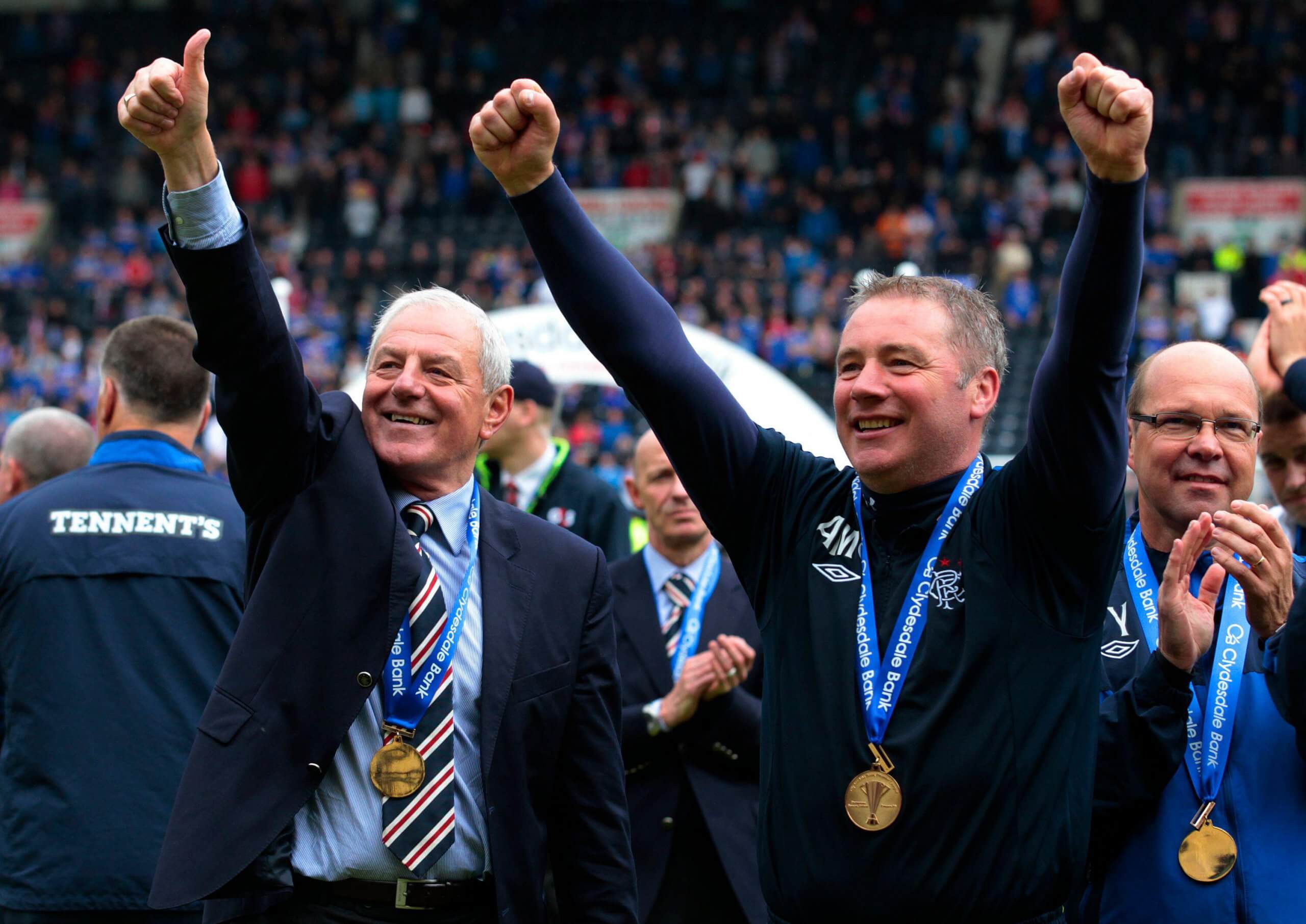 “His legacy has to be winning nine-in-a-row,” reveals Kenny.

“Fans had waited years and years to equal that record and Walter Smith being a true Rangers man, you could see in his face that night at Tannadice.

“He was so proud that he was the man that delivered that for the fans and equaled that record and finally won us nine-in-a-row.

“I just want to say, rest in peace Walter, you’re a leader amongst men, and to me you’re the greatest ever manager, thank you for the memories.”