Fifty-six people died and more than 250 others were injured in one of the biggest disasters at a British football ground on May 11th, 1985.

When Bradford City played Lincoln City at Valley Parade on May 11th, 1985, what should have been an afternoon of celebration quickly turned into one of the worst disasters ever seen at a British football ground.

The 1984/85 season had been one of the most successful in Bradford City’s 82-year history.

Led by former Leeds United and England international Trevor Cherry, the Bantams won only their third divisional title and earned a return to the second tier of English football for the first time since 1937.

City were presented with the Division Three championship trophy before kick-off and such was the air of excitement that over 11,000 people were at Valley Parade that day, almost double the usual average for the season.

However, the celebratory mood soon turned into one of shock and horror when, at around 3:40 pm, the main stand at Valley Parade became engulfed by flames which reduced the entire wooden structure to cinders.

Initially, the fire appeared to be nothing more than a small blaze and was soon noticed by ITV commentator John Helm who was covering the game for Yorkshire Television that day. 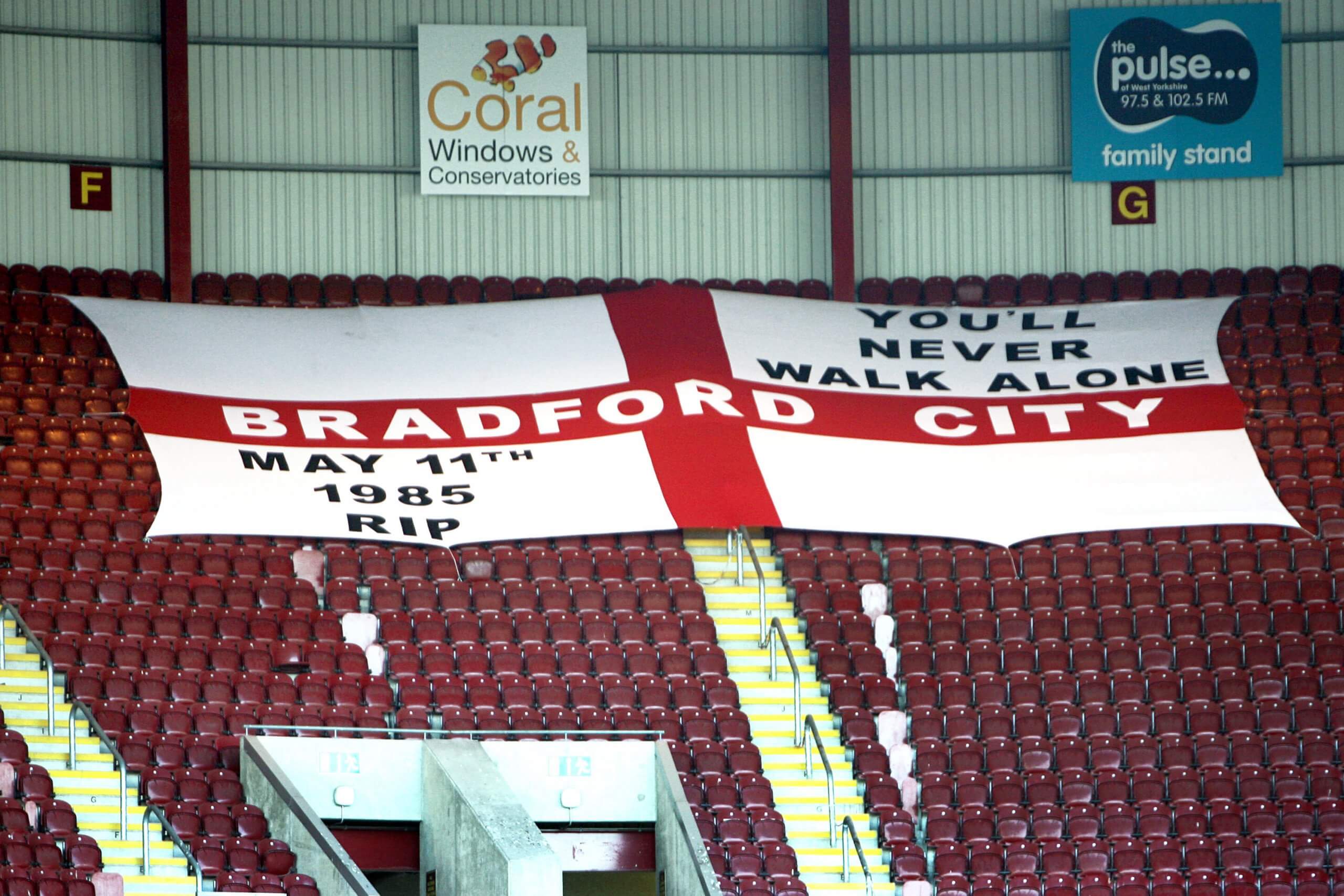 “Something caught my eye,” he later explained. “I asked the director to get the camera to go a little closer. There was a bit of paper on fire, but it was so small. But the scene became progressively horrendous, grotesque, and I was having to describe things you couldn’t possibly imagine.”

Within minutes the fire had spread through the stand due to the windy conditions with some fans claiming that they could feel their feet getting warmer as debris began to burn below them.

Supporters searched for fire extinguishers while the Police began to evacuate the stand with flames soon spreading to the roof and across the wooden steps as timber and other materials began to fall onto the crowd.

After just four minutes of the initial blaze starting the wooden stand was fully ablaze as many of the 3,000 people sitting there escaped by climbing over the perimeter fence onto the pitch – the subsequent inquiry into the disaster concluded the fire spread “faster than a man could run.”

Others weren’t so lucky and headed towards the exits at back of the stands which had been locked after kick-off and this is where the many of those who died perished in the inferno.

On the pitch, referee Norman Glover had no option but to stop the game as the horror unfolded in front of both sets of players who could feel the heat from the flames even from the other side of the ground. 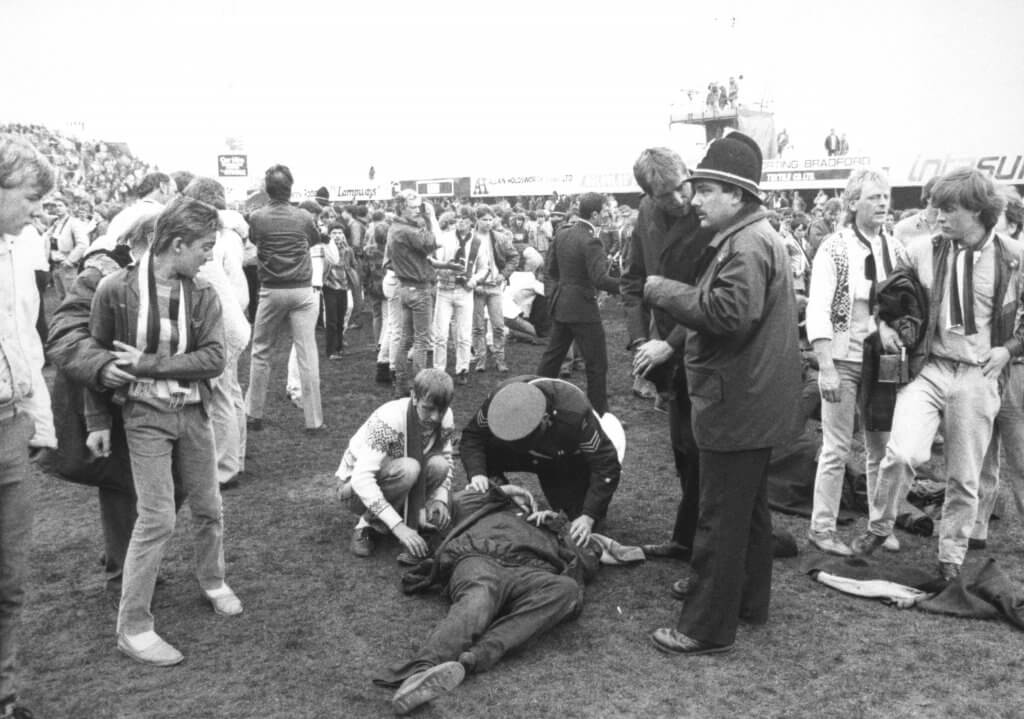 “The referee blew his whistle to stop the game and told us to get back to the dressing room,” recalled City midfielder  John Hendrie some years later.

“We couldn’t run back down the tunnel. We had to run up the stairs, through the office doors and out onto the street. Once we went out it was mayhem, manic, chaotic. All you could see was a black cloud, all you could hear was sirens and screams and all you could smell was burning.”

Those lucky enough to escape, including players from both sides, took refuge in a pub across the road from the ground as friends and family members desperately tried to find their loved ones in the chaos.

“The players were told to go to the pub at the top of the road,” John Hendrie would later reveal. “We didn’t know at this point if anyone had been killed. The scene in there was one of silence and shock. We had not been told anything.

“We stayed in the pub for hours. We were sat in our football kit, we didn’t know what to do. It wasn’t until later on when assistant manager Terry Yorath came in and said: ‘It’s not good.'”

Bradford fan David Pendleton, then aged 21, was at the game that day in the main stand and remembers how something which initially appeared trivial quickly became a desperate situation.

“For the first-minute people were laughing and joking, it wasn’t anything serious,” he told the BBC in 2015. “Then, in the space of 120-odd seconds, it really kicked in. 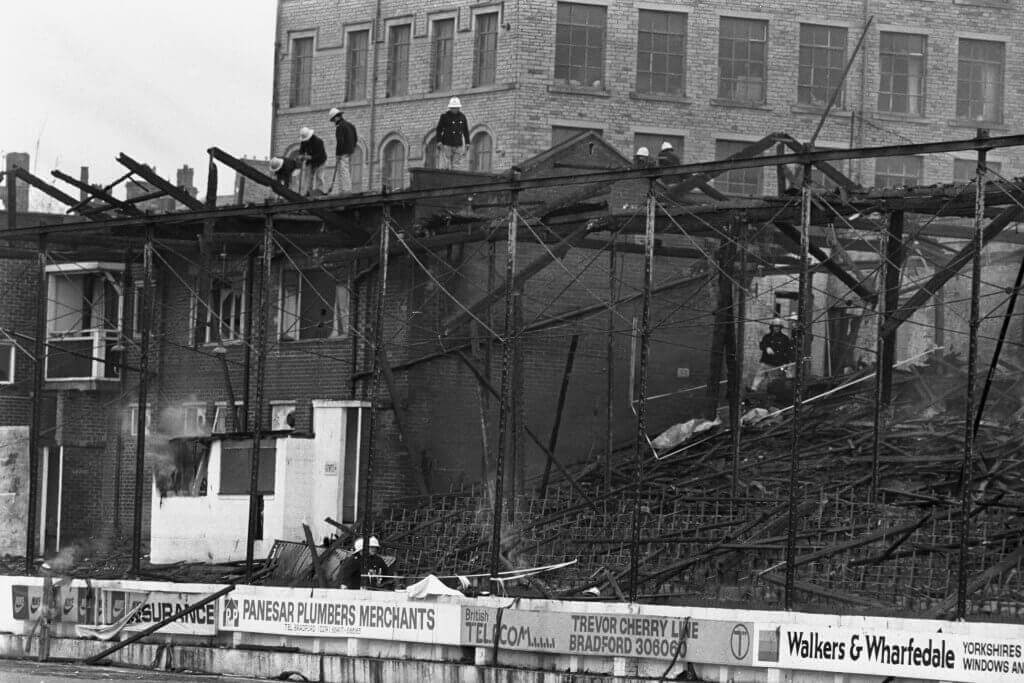 “I got pushed down to the front and I remember looking around and suddenly this smouldering, small fire had taken over virtually half a block and was starting to hit the roof. That’s when I thought ‘this is time to get out of here’. That’s when everybody else had the same thought.

“I walked past a public telephone outside the ground and there were queues of people waiting to ring home. Some of the local residents opened their houses so people could make phone calls, but until I arrived home my mum and my brother had no idea whether I was alive or dead.”

Fifty-four Bradford City supporters and two Lincoln fans would die in the horror, the youngest were three 11-year old boys, the oldest being the club’s former chairman, Sam Firth who was 86.

Three people were killed trying to escape through the toilets, while 27 bodies were found at the back of the stand by the locked exit doors and two elderly people died in their seats.

Some had been crushed as they tried to crawl under turnstiles to escape while a man who was captured on television running across the pitch on fire later died in hospital of his injuries.

The list of victims reveals the impact the disaster had on families as fathers, sons, mothers, daughters, husbands and wives went to a football game that day never to come home again. 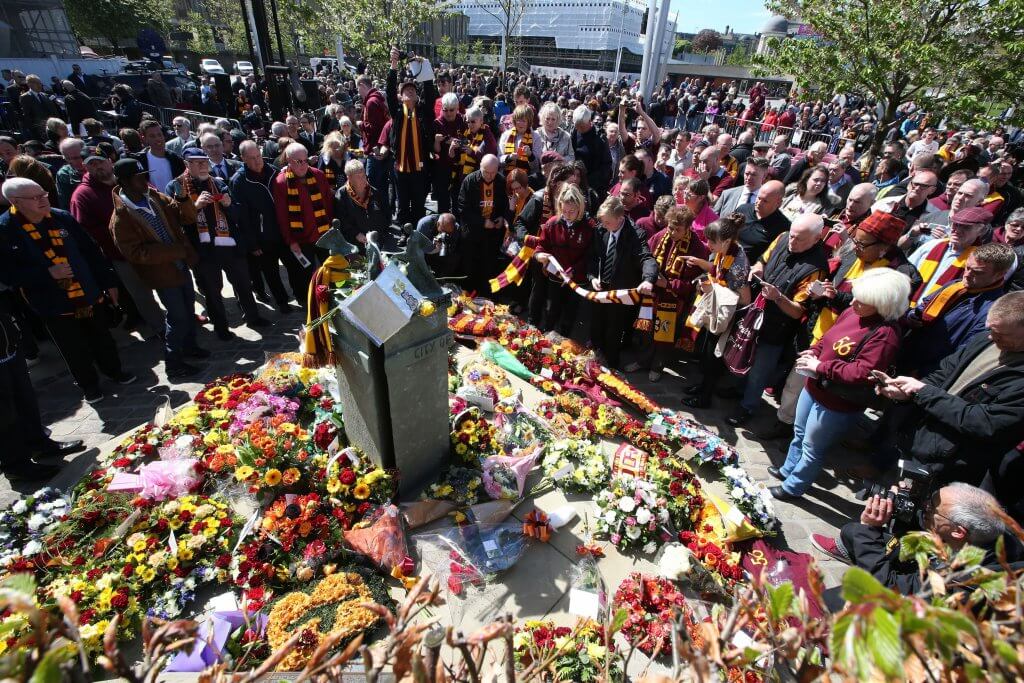 Of all the Fletcher family who attended the game that day, 12-year old Martin was the only survivor. “One day I went to a football match with my family and the next day, I woke up and didn’t have a father, a brother, or a grandfather or an uncle,” he would later say.

Forty-year-old Gerald Ormondroyd also died that day, along with his 12-year old twin sons Richard and Robert, just two of ten families to lose more than one member at Valley Parade..

The 1985 inquiry into the tragedy headed by Sir Oliver Popplewell concluded that it was an accident, probably started by a spectator dropping a cigarette into rubbish that had accumulated under an old timber stand.

But it was too late for the 56 fans that went to a football match and never returned who are still remembered, not just by those in Bradford and Lincoln, but by football fans throughout the country.

Two memorials now stand at Valley Parade, with another in the city centre and since that fateful day, Bradford City have played with black trim on their kit as a permanent memorial to those who lost their lives.

On May 11th each year a memorial service is held in Bradford’s Centenary square with the Lord Mayor of Bradford being joined by The Mayor and Mayoress of Lincoln to remember those who passed away in one of the most shocking tragedies ever witnessed at a British football ground.