Crest of a Slump: The dramatic Manchester derby of 1971

Manchester United had won the European Cup three years earlier, the same season that Manchester City were crowned league champions but, as Matthew Crist explains, both teams were facing a dramatic decline...

This 85th Manchester Derby will go down in history as one of the greatest of all time, packed with incidents and action; but contested by two sides who were both about to endure an alarming slump in fortunes.

In November 1971, an ageing Manchester United side travelled to Maine Road for a game that could be seen as something of a last hurrah for both sides of the Manchester footballing divide.

The Reds were a team very much in transition when they took on their nearest neighbours, though still found themselves at the top of the table, while the Blues were entering a period in their history which saw them offer plenty but deliver little despite lifting the League Cup in 1969.

United manager, Matt Busby, who had built one of the greatest teams in the land that won the European Cup at Wembley just three years earlier, had stepped down and an ageing team were struggling to come to terms with a new regime under Frank O’Farrell.

The old guard of Best, Law and Charlton were still seen as the holy trinity of the side, but this was mostly for sentimental reasons, and in truth the backbone of the side that had tasted so much success at home and abroad were on their last legs and the team needed fresh faces.

City on the other hand, who had been crowned champions three years previously, boasted their own talented trio of Bell, Lee and Summebee were keeping the City faithful entertained on a weekly basis. 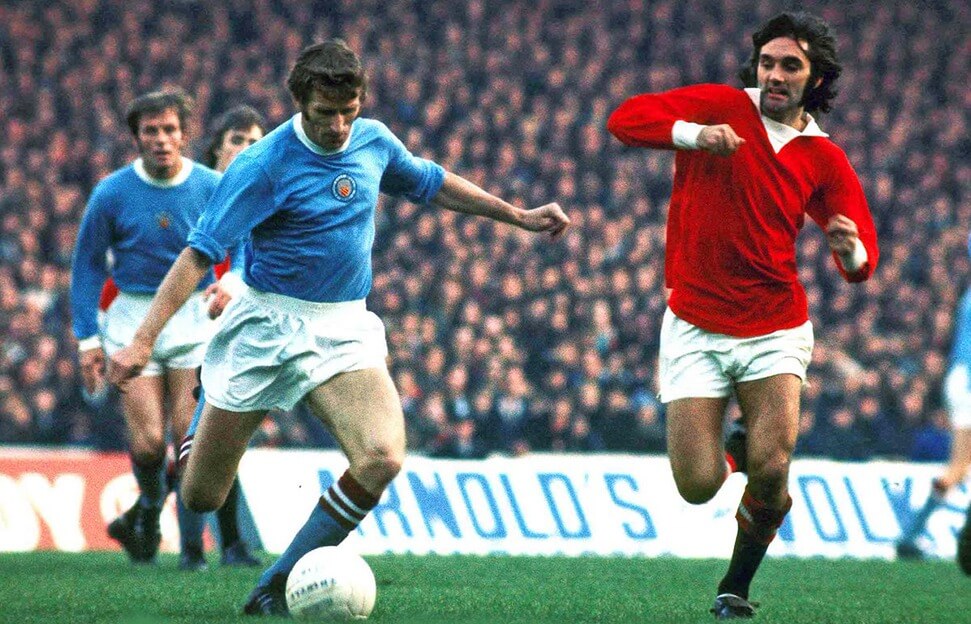 So as the two sides lined-up to battle it out for cross-town honours in their 85th league meeting, the 63,000 or so fans that were in attendance anticipated something of a classic – and they weren’t disappointed.

Another veteran of United’s 1968 European Cup campaign that day was Alex Stepney, and the keeper was called upon early to deny Francis Lee on a couple of occasions, but it was the new boy who would make the first real impression on the game.

A move heavily influenced by George best, who had earlier been clattered by Lee, a decision which saw the city striker booked despite claims that the Irishman made the most of it, was rounded off by 18-year old debutante Sammy McIlroy, who was Matt Busby’s final signing, driving into the bottom corner of Corrigan’s net.

Another fine save from Stepney, this time bravely diving at the feet of Colin Bell, made sure United went in at the break 1-0 up and almost immediately after the interval United found themselves 2-0 to the good, when a McIlroy dummy fooled the City defence and Brian Kidd slotted home.

But mid-way through the half  Francis Lee went to ground in the United box with referee Ray Tinkler immediately pointing for a penalty which Lee duly converted and within minutes the hosts were level as Colin Bell latched onto a through ball before rounding Stepney with ease.

United took the lead once again on 63 minutes when City ‘keeper Joe Corrigan punched clear from a corner straight to the feet of John Aston, who Aston who drove the ball into the box from 25 yards and Sammy McIlroy deflected the ball into the net. 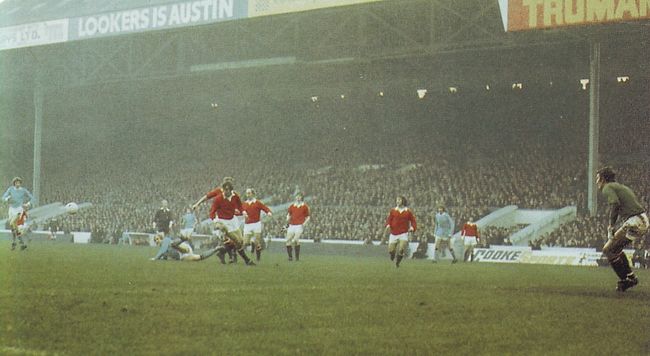 Despite plenty of pressure City couldn’t breakdown the United defence and then with just a few minutes left Mike Summerbee beat two United players and unleashed a rasping shot from 25 yards that Stepney could only turn behind.

Lee quickly took the resulting corner and with the Reds’ goalkeeper only able to fumble the ball it fell to Summerbee who smashed it into the top corner of the net from 10-yards to mean a magnificent Manchester derby would finish 3-3.

A draw was probably befitting of a great game played at an electric pace by two fully committed teams, but in truth, two sides that were both entering into something of a long spell of mediocrity.

Just a couple of seasons later United would be relegated, ironically on the same day as they faced the Blues at Old Trafford and they would continue to struggle to compete in the decades that followed as the team deteriorated and subsequent managers failed to rebuild.

As for City, they would spend the remainder of the 1970s fielding attacking line-ups that entertained the Main Road faithful, yet delivering little and, following the 1976 League Cup win over Newcastle, they would have to wait over 30 years for their next major trophy.