Max Cooper from our fan partner, The Bear Pit, takes a look at Stoke's manager and the team have taken a huge step in the right direction.

This week the media finally decided to pay some attention to Stoke City again. Unsurprisingly, it was the usual negative, unsubstantiated drivel.

Sky Sports released a piece titled “Does Nathan Jones’ record at Stoke need to improve?” and former Crewe striker Dean Ashton wrote an article about ‘flat’ Stoke, which must have taken 20 minutes to put together and even less to research.

Ashton looked into his crystal ball of nonsense and clichés and delivered his damning verdict.

He said: “I hate to say it – but I would be surprised if Nathan Jones sees past the end of October.”

His ‘cutting-edge’ analysis was published on Friday, three days after we had amassed 24 shots in an away tie at Wigan, and one day before we assaulted the Derby goal, totaling 19 shots against the Rams.

43 shots over two matches. It’s a staggering feat that we haven’t achieved for years and years.

There’s naturally a downside to those figures. We’ve only managed three goals from 43 attempts. Without a shadow of a doubt – our finishing must improve, and the attacking players have to be as ruthless as our manager.

But looking beyond the results, quantitative data and hard facts, there are so many positives to take from the two performances. Over the past seven days we’ve witnessed genuine progress, and a huge step in the right direction.

Jones started a back three against Wigan in the Carabao Cup, which the players appeared to relish, forming wave after wave of attacks on the Latics’ goal. Our full-back area has been a major problem so far this season, (particularly the left side) so having the option to play a three-man backline gives less defensive responsibility to our wide players, which could be a viable alternative going forward.

The Potters’ performance against Derby on Saturday was arguably our best of the Jones. It was fast, it was hard-running, it was dynamic. The support was also terrific even after going a goal behind, and the fans egged on the lads, encouraged by the fast-paced nature of Stoke’s display.

Whilst we missed some glaring chances, there’s plenty to be optimistic about going into our midweek clash with Preston. 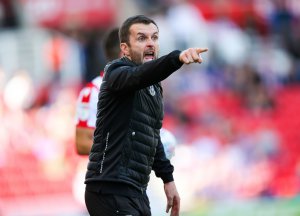 You try telling that to Jones though.

The Welshman was absolutely livid in his post-match press conference, and whilst his audience may have been expecting his usual positive take on the 90 minutes, the Stoke boss went in hard on his players, clearly feeling let down by their contributions.

Jones said: “I work hard, I work so hard 12 hours a day, seven days a week to have a structure and we do stuff and first half we were excellent.

Jones clearly shares our frustration and whilst us supporters may come away disappointed but encouraged by the result and display respectively, the boss was clearly unhappy by the countless squandered chances which should have put the game to bed as early as half-time.

He hit the nail on the head with his post-match analysis, describing his side as “outstanding outside of both boxes” but that our performances inside the two areas “takes us down to just a good side”.

The team looked much more comfortable in the diamond formation, James McClean was much improved and one of the star performers in his new left-back role, and as mentioned, the Potters carved the Rams open at will throughout the match.

Forwards Scott Hogan and Lee Gregory have struck up a wonderful partnership, looking a genuine threat on the ball and have the energy to terrorise defences with their work-rate off it. The summer’s recruitment appears to be paying off

But individual errors are costing us dearly. Be it unbelievable glaring misses in front of goal, concerns in the midfield area, or unforgivable lapses of concentration at the back, the players are letting Jones down.

Joe Allen appears to be struggling to adapt to his role in the diamond, and his position in the starting XI must be at risk with the long-awaited return of talisman Peter Etebo imminent. His laughable miss from a couple of yards out at the weekend certainly won’t have done him any favours with Jones either. 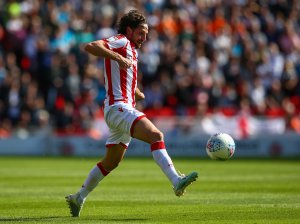 Derby’s equaliser stemmed from an unnoticed and untracked midfielder breaking between the lines and was then allowed the freedom of the pitch, which resulted in the concession of the penalty.

Jones said: “As a team we’re a good side, we’re developing and I can’t remember the last time a Stoke side played like that and with that attacking impetus and desire to move the ball.”

These creases need to be ironed out, but there’s a sense around the fanbase that we’re building up to something – a shellacking is in the offing, and Preston may well be on the end of it.

Jones will no doubt have seen the ridiculous article from Ashton, and seen the Sky Sports headline, and I imagine he paid no attention to it, so I’ll make my own ‘Ashton-esque’ prediction: Nathan Jones will be Stoke City manager in the Premier League.

Jones said: “This time last year I had a point after three games and the team ended up winning the league.”

Jones is a manager who is as passionate as he is honest, as he is ruthless – and he’s the man who deserves to succeed.