England's most emphatic overseas Test win in nine-years has put them in the driving seat as they look to repeat their 3-1 series win over South Africa back in 2017 when they head to Johannesburg on Friday.

After their most convincing Test match win in almost a decade England will look to seal the series with South Africa in convincing style when they contest the fourth Test which begins on Friday in Johannesburg.

Having lost the first Test of the four-match series, England have bounced-back convincingly and are now on the brink of earning their first series win in South Africa since 2017.

Not since that famous Ashes triumph in 2010/11 have England won an overseas Test by an innings, but Root’s men were made to work for their win, with Keshav Maharaj and Dane Paterson putting on a brave tenth wicket stand for the hosts, scoring 99 runs to delay the inevitable.

Dom Bess took five wickets in the first innings while man of the match Ollie Pope scored 135 not out to land his maiden century while also taking six outfield catches in the match while Ben Stokes, so often the hero of this England side, hit 120 as the visitors scored 499 – a feat they can be backed to repeat in Jo’burg at 7.50.*

It’s all a far cry from the start of the series which began with a first-Test defeat at Centurion while England’s preparations were somewhat ruined by sickness in the camp, not to mention Ben Stokes’ father being admitted to hospital just hours before the first ball was bowled and Rory Burns heading home with an ankle injury sustained playing football.

If England are to win the series they will need to avoid defeat in Johannesburg, which is by no means a certainty, but given the way these two teams now seem to be going in opposite directions, Captain Root will no doubt be confident. 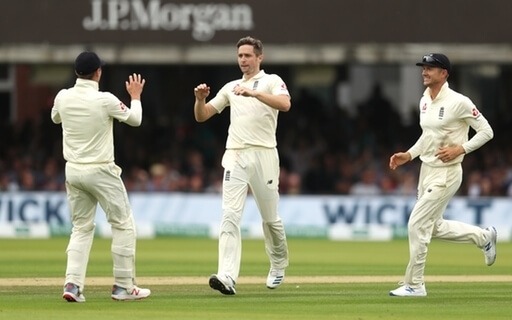 As for the hosts, their win in the first Test ended a run of five successive defeats, but since then they have quickly gone backwards and will be desperate to prevent a 3-1 series loss – which would be a repeat of the scoreline when the two last met three years ago.

Pace bowler Kagsio Rabada is banned for the final Test, while the threat of Vernon Philander, who retires after the match in Johannesburg, has gradually diminished as the series has progressed.

The lack of runs will no doubt concern South Africa Coach Mark Boucher, not least the form of captain Faf du Plessis, who has gone nine innings without a half-century while there still appears to be plenty of confusion surrounding the skipper’s future.

“I have heard the rumours about a possible retirement,” said du Plessis after the third Test. “I have been clear and consistent that the Twenty20 World Cup is the time I am looking for. Nothing has changed.”

The thinner air and fast pitch of the Wanderers will no doubt allow the ball to zip through and it would be no surprise to see England again opt for five pace bowlers, especially if Jofra Archer is fit after his elbow injury.

England have played five pace bowlers in two Tests this winter, so they are not against doing it, though the headache for Joe Root would be the prospect of dropping Bess after his sensational performances in the last two matches.

Not surprisingly England are as short as 1.76* to win the fourth Test, though with Joe Root and especially Ben Stokes looking dangerous with the bat once more, the real value might be to back Root and Stokes to score 50 runs or more each in the first innings at 7.00.*