It’s a telling indication of the wealth â€“ or lack of â€“ in Scottish football that Celtic have not broken their transfer record in 17 years despite being the league’s dominant force.

Since 2001 the£6million forked out to bring John Hartson and Chris Sutton to Celtic Park remains the most the Glasgow giants have spent on a single player. But that could be about to change.

According to the Scottish Record, the Bhoys are giving serious consideration to spending at least£7million to sign on-loan Paris Saint-Germain forward Odsonne Edouard on a permanent basis this summer.

The 20-year-old has only been afforded 12 Premiership starts this season but has taken his chances with aplomb when they’ve arrived, netting nine times.

In fact, his return of 0.73 goals per 90 is the second best in Scotland’s top flight, only behind Hibernian forward Jamie MacLaren (0.78).

So with a record-breaking deal in the pipeline, our friends at Football Whispers look at why Brendan Rodgers is keen to keep Odouard at Celtic and whether spending so much on a player who has effectively been third choice this season is good business.

Why do Celtic want Edouard?

While Moussa Dembele stole the headlines in his first season in Glasgow, netting 17 times from just 20 Premiership starts, he has struggled to repeat the form which made him subject of Tottenham transfer rumours last summer.

This term the Frenchman has managed just nine league strikes, the same as Edouard but in 380 more minutes and five more starts. They two are very different players, however.

For Dembele, who was subject of a£15million offer from Brighton & Hove Albion in January, the goals are the thing casual observers see. Last season’s league tally might seem modest but in all competitions he hit 32. Impressively, five of those came in the Champions League.

But there is more to the former Fulham youngster. He provides 0.95 key passes â€“ passes leading to a shot â€“ per 90, for example. Edouard only manages 0.54. But the PSG loanee has a skillset of his own which gives Rodgers an alternative.

While he is a grafter and works the channels, he still does most of his best work inside the penalty area, taking 4.92 touches in the opponent’s box per 90 vs. the 4.78 Dembele manages.

Think Brazil will win this summer’s World Cup? Back the samba stars at 4/1 with FansBet

Reports in France claim Celtic have until May 31 to trigger the clause to sign Edouard on a permanent basis.

â€œWe have to respect he’s a Paris Saint-Germain player, not a Celtic player,â€ Rodgers said earlier in the season. â€œThe clause is there and there’s been an agreement â€“ but we would need to trigger the fee.

â€œThere’s a lot to do in terms of the bigger picture too. In time we’ll see. He’s a fantastic player and we’ll see between now and the end of the season.

â€œBut he’s settled in well and if we have any chance to do something at the end of the season then we can look at that.â€

He added: â€œBecause his representatives aren’t running about throwing him to every club under the sun it doesn’t mean he’s not a top player. There’s no propaganda around him, but he’s a top talent.â€ 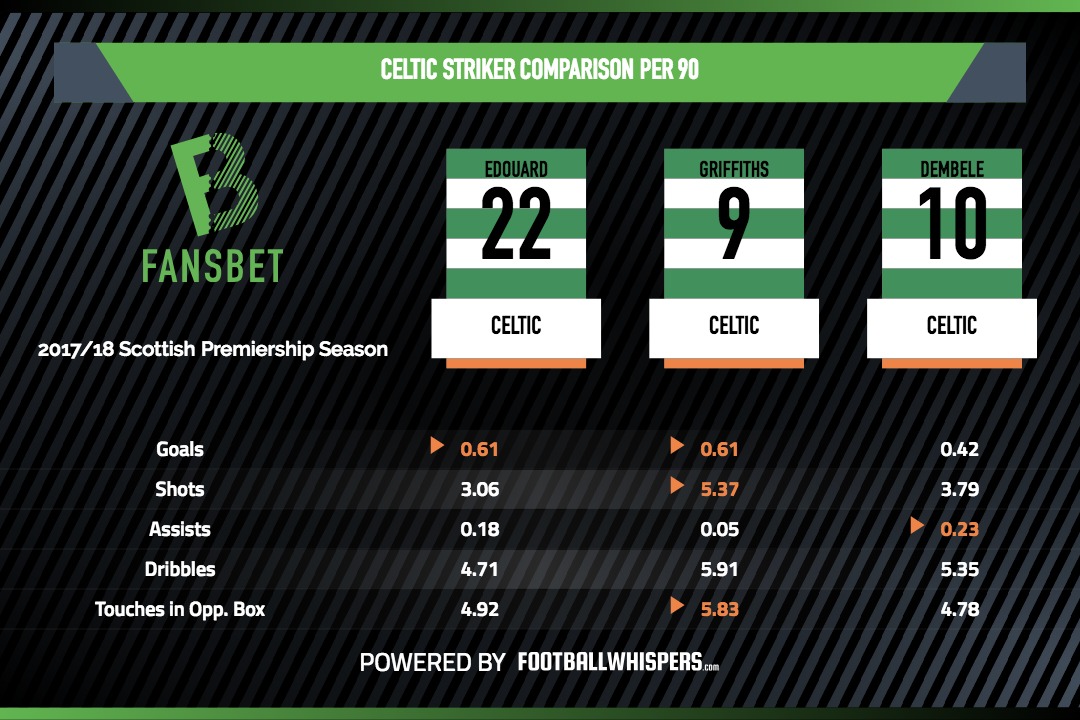 Do Celtic need Edouard, though?

The Bhoys’ striking department is chock full of quality. On top of Dembele, mooted to be a£40million talent in the not-too-distant past, there’s Scotland international Leigh Griffiths who, having made just 11 Premiership starts, would be within his rights to wonder what the permanent signing of Edouard means for him.

Even though Rodgers favours one-striker systems over those which utilise a strike pairing, Celtic need three forwards of similar standing to compete in four competitions again next season.

With the double treble sewn up and another step towards ten-in-a-row taken, the Hoops boss has got to crack the Champions League. That means getting out of their group for the first time since 2008 when they were beaten by Barcelona.

Signing Edouard has a two-fold benefit for Rodgers and Celtic. Firstly it gives him the option to rotate his forwards to keep them fresh for the biggest games. It also means he has horses for courses.

For example, it is interesting to note that Griffiths provides 2.88 crosses per 90. Dembele (0.42) and Edouard (0.59) do most of their work in central areas, even if the former tends to drift in from a wider starting position on the left.

Despite that Griffiths takes more shots per 90 than either of his striking peers (5.37). With an average of just 3.06 Edouard has the same number of league goals as Dembele and Griffiths which is mightily impressive. As is the fact he has out performed his xG (expected goals) total of 7.56. Griffiths (8.65) narrowly pipped his score while Dembele (9.67) came up just short.

That is an indication of the kind of clinical finishing which will serve Celtic well in the Champions League where they can expect to come up against tougher defences and create fewer openings. If the Bhoys are serious about making progress on Europe’s biggest stage, spending£7million on Edouard is a necessity.