Shriners Hospitals for Children Open: Who Will Come Out on Top In Sin City?

As the PGA Tour heads to Las Vegas, David Kristiansen takes a look at who could claim victory at the Shriners Hospitals for Children Open.

As we focus our attention to the Shriners Hospital Open on the next stop of the PGA Tour, many will still be recovering from the Safeway Open which saw Cameron Champ take home the prize.

Champ was able to claim his victory by a single shot over Adam Hadwin on Sunday and saw him secure his second career win.

After last year’s win, he never got close again for the rest of the season, only managing two top 10s and missing nine of 13 cuts from January to the start of August. It will be interesting to see if he can build of this victory or if it will be just another one off.

Our picks were looking good with both Collin Morikawa and Chez Reavie inside the each way places heading in to Sunday but both having disappointing Sundays we were left wanting. 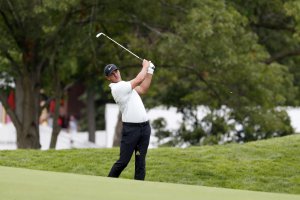 The Tour heads for sin city to the TPC Summerlin, located in the outskirts of Las Vegas. Once again, we have a good field for a fall series event spearheaded by world number one Brooks Koepka.

The course is a suburban private club that has produced a couple of great winners in the last two seasons in Patrick Cantlay and Bryson DeChambeu. Off the tee the golfers will face average wide fairways.

The greens are large and the regulation percentage is one of the highest on tour, but since the pins can be tucked in awkward positions the up and downs become really challenging.

This also means that putting will be more important than normal, the surface this week is bentgrass on the greens and bermuda in the fairways and rough.

First and foremost, this is a second shot golf course where the players need to control their distances with the ball flying a little longer than normal due to the elevation.

We are going back to Morikawa who fell a couple of shots short of an EW place after a disappointing Sunday last week.

However, once again I think he will line up close to perfect for this course. He ranks in the top 20 in approach, fairways gained, par 4 scoring between 400-450 and birdies or better gained.

He has only played eleven tournaments as a professional, but he is averaging 3.2 shots gained on approach per tournament, that’s top 5 in the world numbers.

The young American makes his season debut here and the time off is the only reason we are seeing these kind of odds in this field.

After he burst onto the scene winning the 3M Open in July, he followed up that performance with some solid results before he ran out of gas in the first play-off event.

Before that he had gained strokes both on approach and around the green in five straight starts. He is also ranked within the top 20 in birdies or better, so going low enough shouldn’t be a problem for the talented youngster.

Harman comes into the tournament on the back of a third and a 14th place finish in his first two starts this season. He ranks in the top 20 in the field in fairways gained, birdies or better gained, strokes gained around the green and par 4 scoring between 400-450 yards.

He is ranked 17th in the field in bentgrass putting over his last 100 rounds. He hasn’t played this tournament in a couple years but had a respectable 15th place finish last time he played here in 2016.