Return of Fans: There was a responsibility on us to make the noise

8,000 people were in attendance at Wembley on Sunday - the biggest crowd at a UK sporting event for over 12-months.

A crowd of 8,000 watched Manchester City beat Tottenham Hotspur in the League Cup final on Sunday – the biggest attendance at a UK sporting event since the COVID-19 pandemic began more than a year ago.

As part of the British government’s Events Research Programme (ERP), the final was being used as a pilot event to test the safe return of supporters.

For more than 12-months, England’s stadiums have been silent, apart from a brief window late last year when small crowds were allowed before a deadly resurgence of COVID-19.

Each side had 2,000 of their own socially-distanced supporters, plus 4,000 local residents and NHS workers, and the noise generated,  even by such a small gathering, made a huge difference to the atmosphere after a season of games behind closed doors. 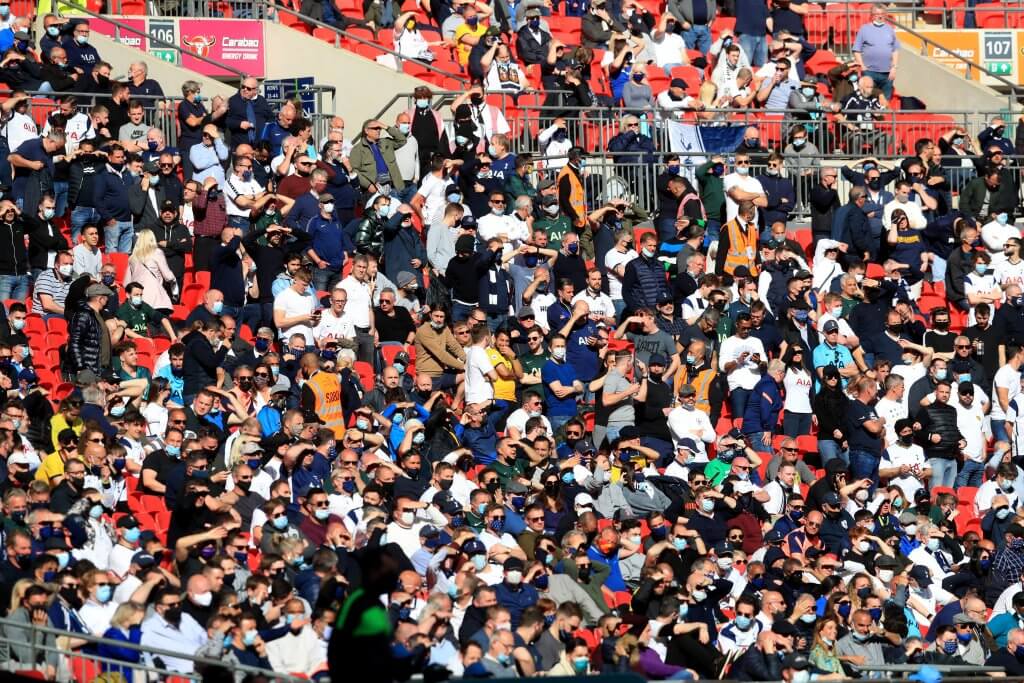 It was those supporting Manchester City who left in high spirits as Aymeric Laporte’s late header secured a 1-0 victory, a fourth straight League Cup win.

To get into Wembley, fans had to take a lateral flow coronavirus test at a designated site in the 24 hours before the game and produce proof of a negative result.

They also have to take two PCR tests at home – one before travelling to the match and another five days afterwards.

But all involved embraced the sight of fans from two sets of teams inside an English stadium for the first time since March 2020.

“My last live game was last year’s League Cup final, so that was odd comparing the 80 odd thousand we had last year with less than 8,000 this year,” author and Manchester City fan Gary James told FansBet.

“From a safety point of view, it all went well. Us fans had so many tests that I didn’t worry about that.

“It was brilliant to see and experience the interaction between the players and fans. Some of them definitely reacted on the pitch as a result of fan activity. Football without fans is nothing, it needs us to ensure it is a true spectacle.

“Obviously, it was hugely disappointing to know only a small fraction – we had about 2000 tickets per club – of our regular support could be there.

“But I was one of the fortunate ones who managed to get a ticket and I felt that all day at Wembley. There was a responsibility on us to make the noise and do everything well because we were representing the near 90,000 that would normally be there.”

Having the fans back is so good to see! Proper proper buzz. Can’t wait for it🤩

Wembley is due to welcome 21,000 fans for the FA Cup final on 15 May as part of the UK government’s Events Research Programme (ERP) to examine how to get spectators back into venues in financially viable numbers from 21 June.

The Football Association is hoping Wembley can be at its full 90,000 capacity for the Euro 2020 final, but accepts 45,000 might be a more realistic target.

The Premier League plans to have up to 10,000 supporters in stadiums from Monday, 17 May provided the government is able to stick to its scheduled roadmap.

To maintain a competitive balance and ensure all 20 clubs get to play a home game with fans present, a round of fixtures will be shifted to 18-20 May.