England marched into the quarter-finals of the 1996 European Championships after destroying the Netherlands at Wembley.

When the tournament hosts faced Holland – who were perceived as one of the better sides in the competition – England were seen by many as merely plucky chancers – but what happened that night would not only throw the formbook out of the window; it would give a nation a reason to believe once more.

Euro ’96 had started slowly for England after a disappointing 1-1 draw in the opening game against Switzerland.

However, a memorable 2-0 win over Scotland, thanks to heroics from David Seaman and Paul Gascoigne, meant they would find themselves in a straight shootout with the Dutch for the Group A top spot when the two met on a balmy night under the old twin towers.

Holland had struggled to draw with Scotland and just scraped past Switzerland, leading some to feel this Dutch team was more stereotyped and less formidable than its free-flowing predecessors; even so, recent meetings between the two, including a 3-1 thumping at Euro ’88, suggested England had their work cut out to avoid another disappointment. 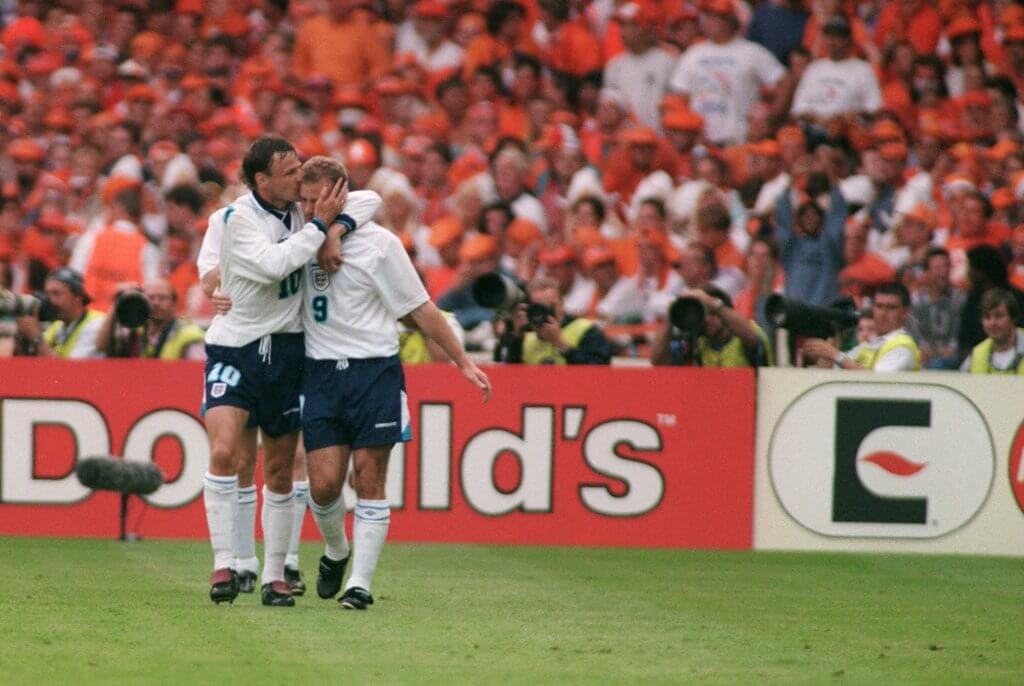 There was genuine nervousness across the nation ahead of the final group game against a Dutch side who no longer had Cruyff, Gullit and Van Basten but were still able to call upon the services of Dennis Bergkamp, Clarence Seedorf and Patrick Kluivert.

Off the pitch, Holland’s huge support was as visible as it was audible thanks to huge swathes of orange around the stadium, which helped to give the game the atmosphere of a cup final.

As the game got underway both sides were pinging the ball across the lush Wembley surface at a frantic pace and with real quality too.

The Dutch had quickly found a rhythm and tempo that suggested, on the pitch at least, things were A-okay while England were moving it around with the freedom and confidence of a team that really believed in themselves.

Both teams had chances early on. From a low Darren Anderton corner to the near post, Alan Shearer shot on the half-volley only for Richard Witschge to clear the ball off the line. 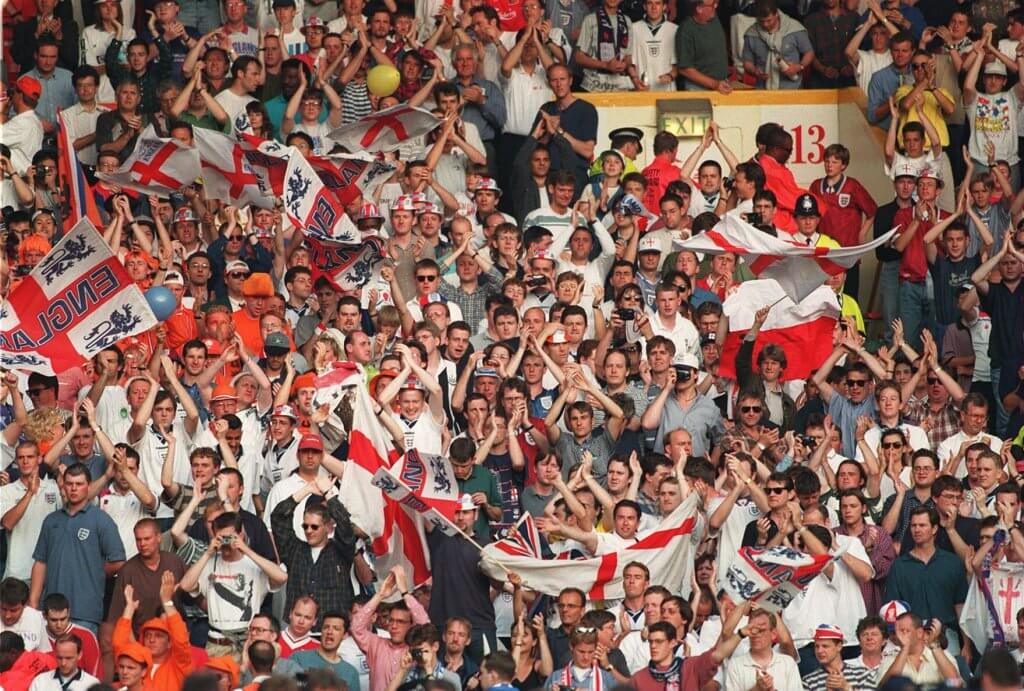 Meanwhile at the other end, Aron Winter missed a glorious chance to score from two yards after mistiming a header.

It was clear from the early stages that England had adopted a policy of containment, ready to hit the Dutch on the counterattack when they were overstretched and it was one such counter which put England in front.

After a pretty even 23 minutes, Paul Ince deceived Danny Blind with a cheeky drag-back, only to be brought crashing to the ground and Alan Shearer stepped up to thump home the penalty. It was a great start but nothing compared to an 11-minute spell at the start of the second half where England score three more.

Sheringham rose wonderfully to make it 2-0 with a header, then Gascoigne created two more thanks to his advances into the box. Sheringham finding Shearer with a side-foot pass that was hammered in for the first. Then, when Darren Anderton’s shot was spilled by Edwin van der Sar, Sheringham was on hand to score from the rebound.

The game was as good as over as England fans drowned out their Dutch counterparts in a mass sing-song which lasted for the remainder of the match. 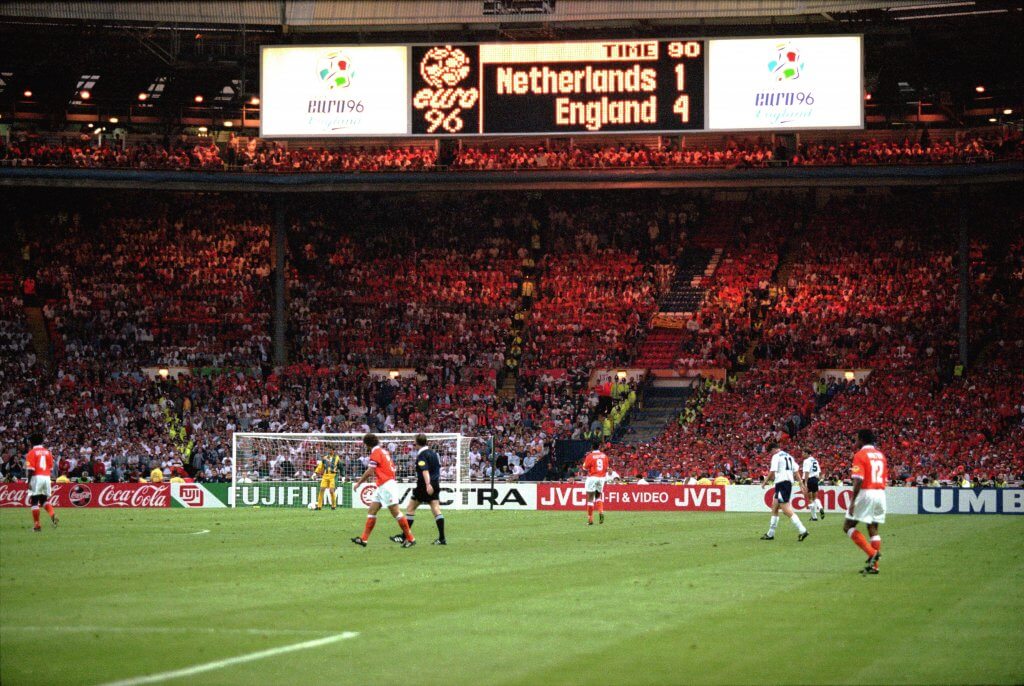 Some might not have even noticed that second-half substitute Patrick Kluivert had slotted the ball under David Seamen to grab a consolation goal for Holland – but it mattered little.

England had scored four goals against one of the tournaments favoured teams, the first time anyone had done so in any form of competition for 21 years and in that second half sent out a message, not just to their opponents, but to their own players and fans that they were capable of actually progressing in a tournament that was there for the taking.

History shows this famous win didn’t prove to be a turning point for the fortunes of the England national team as they were knocked out after a penalty shoot-out by Germany in a thrilling semi-final and haven’t progressed as far in any tournament since.

However, what this game did prove was what an England side can be capable of when they are given the confidence and encouragement to play their natural game without being weighed down by restrictive shackles and overburdened with unnecessary tactical limitations.