Matthew Crist looks back at one of the most dramatic Wembley finals ever as the Sky Blues enjoy their day in the sun.

When Coventry City lifted the FA Cup in 1987, they certainly did it the hard way, winning away at Manchester United and Sheffield Wednesday before overcoming Leeds at Hillsborough to reach Wembley for the first time in their history.

And it didn’t get any easier in the final on May 16, where they met a star-studded Tottenham side featuring the likes of Glenn Hoddle, Chris Waddle and Clive Allen, who alone had scored 48 goals in all competitions going into the game.

Coventry were flying going into the biggest game in their history; unbeaten in seven matches and always improving under the guidance of a managerial pair of John Sillett and George Curtis, though nobody saw them as anything other than huge underdogs.

That’s becasue Spurs were bidding for a record eighth FA Cup triumph and had never lost an FA Cup final while Coventry were appearing in their first final after 104 years of trying – surely there could only be one winner.

Such was their confidence going into the final: “Seven times we’ve won the Cup, and number eight is coming up,” was just one of the lines in Chas and Dave’s now traditional cup final song: “Hot Shot Tottenham.”

So when footballer of the year Clive Allen headed home his 49th goal of a magnificent season as early as the second minute, everyone expected an avalanche, and though the goals rained down on a blazing hot day, they didn’t all go the way most people had predicted.

Dave Bennett, an FA Cup final loser at the hands of Spurs with Manchester City six years earlier, equalised just seven minutes later to send the Sky Blues fans crazy and give just the most subtle hint of the drama that was about to follow.

But City’s celebrations were cut short when a scruffy Gary Mabbutt goal put Tottenham back in front and order appeared to be restored just five minutes before the interval as an estimated TV audience of 20 million held their collective breath. 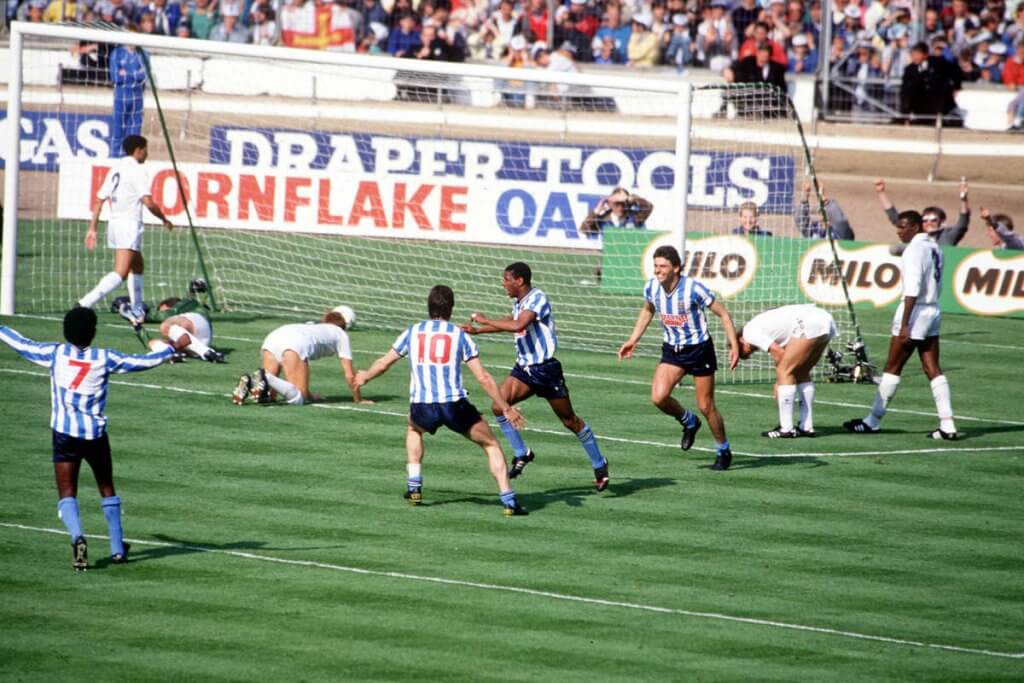 However, a defiant Coventry weren’t done yet and hit back again with a superb diving header from Keith Houchen, a goal which provided one of the most memorable moments that Wembley’s old Twin Towers had witnessed.

The scene was set for a dramatic extra-time dogfight, but the winning goal was cruel luck on loyal Spurs servant Mabbutt.

As Lloyd McGrath crossed the ball into the box, the Tottenham captain stuck out a knee and only succeeded in steering the ball up and over his own goalkeeper, Ray Clemence – an inglorious winner for a glorious occasion.

Tottenham were devastated, they had given it everything in an effort to win the FA Cup for a record time, but had come up short against a side that few people had fancied.

“A couple of our players did not do what they have been doing or are capable of doing,” Spurs manager David Pleat said at the final whistle. “The players who did not quite get to grips with it know who they are.”

Meanwhile, Coventry boss John Sillett claimed after the game that the longer the game went on, the more certain he was that his team were going to win it. “Just before extra time I could see some heads dropping. They didn’t relish the prospect of the extra half-hour,” he revealed.

Coventry skipper Brian Kilcline, who had been taken off in the second half with cramp, mustered the energy to hop up the famous old 39 steps to collect the trophy, thrusting it jubilantly in the direction of the thousands of City fans at the far end.

“One of the most stirring performances in the history of the FA Cup,” is how James Lawton described the occasion in the Express the following day, a sentiment which nobody who witnessed it could disagree with.