The Scot ended Britain's 76-year wait for a male Grand Slam singles champion with an epic victory over Novak Djokovic and will return to Flushing Meadows later this month.

It had been 76 years since a British man won a Grand Slam singles championship but, for Murray at least, it was well worth the wait.

Ending Great Britain’s long drought, and breaking a personal run of major final defeats, Murray finally pulled through with everything at stake on a Grand Slam stage, shrugging off defending champion Djokovic’s comeback bid to win in five sets at Flushing Meadows on September 12, 2012.

Murray had shown that he could deliver on the big stage by taking the gold medal in front of a home crowd at the London Olympics a month before. But this was different. This was a Grand Slam tournament.

The Scot was one of only two men in the professional era to have lost his first four Grand Slam finals, going down to Djokovic in the 2011 Australian Open, and against Federer at the 2008 U.S. Open, 2010 Australian Open and this year’s Wimbledon.

Djokovic, in contrast, was bidding for his sixth major trophy, fifth in the past two seasons. He had won 27 Grand Slam hard-court matches in a row.

So having overcome Marian Cilic in the quarter finals and then defeating Tomáš Berdych in the semis, the 25- year old from Dunblane had history in his sights. 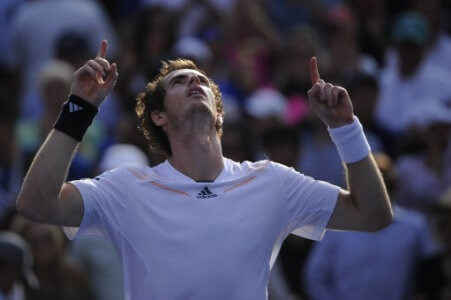 A swirling wind made conditions troublesome for both players in the final, but it was Murray who coped better in the first two sets.

After early breaks were exchanged, Murray struck again and moved 4-2 ahead following a game that included a 54-shot rally, before Djokovic rallied to force a tie-break, yet his opponent showed greater belief and took a sixth set point with 87 minutes on the clock.

Visibly boosted by his first-set victory Murray carried his momentum into the second, breaking Djokovic twice for a 4-0 lead, only for a lapse in concentration to allow his opponent back in and when the Serbian landed a majestic lob it was suddenly 5-5.

However, Murray then forced a flurry of errors from the world number two, opening up a two-set lead for the first time in a Grand Slam final.

The Flushing Meadows crowd, which contained fellow Scots Sir Alex Ferguson and Sean Connery fully expected Djokovic to respond and he did – threatening in game one of the third set before making his move in game three.

Murray was now beginning to feel the heat and fell a double-break down thanks to an incredible backhand on to the baseline from Djokovic, who easily closed out the set. 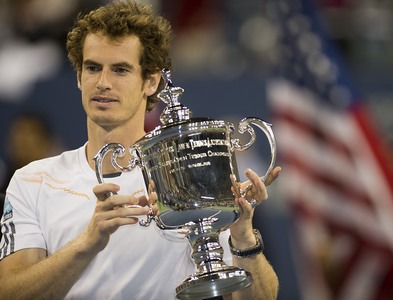 Djokovic looked revitalised and the right-hander from Belgrade swiftly found himself 2-0 up in the fourth, taking his performance to a new level as he made it two sets each as he tried to become the first man since Pancho Gonzales in 1949 to rally from two sets down to win the US Open.

But Murray had other ideas and made a devastating start to the decider, breaking in game one and consolidating it with some defensive play of the very highest order.

The third seed saw his opportunity when Djokovic netted a forehand to hand over the double-break, only for a nervous Murray to immediately surrender one of his strikes with a weak backhand.

A love service hold put Murray back on track and he advanced to within one game of victory when Djokovic netted with a forehand, allowing him the chance to serve for the championship exactly 79 years to the day that Perry won the first of his eight major singles titles.

And when the final shot of the match – a rasping forehand from Djokovic – went long, Murray appeared almost stunned by his achievement; he had finally overcome lingering doubts about his mental fortitude when it mattered most in a final that lasted 4 hours and 54 minutes.

“When I realised I had won, I was a little bit shocked, I was very relieved and I was very emotional,” said Murray afterwards. “If I had lost this one from two sets up, that would have been a tough one to take.”