Putting the Boot In: Classic footwear designs and what they said about you

Lee Farnhill puts his best foot forward and steps back in time to look at some of the most iconic boots of the past that helped define a generation and made park players believe they were Ronaldo.

“What boots are you getting mate?” – A question that would come around once a year from intrigued school friends and teammates, and one that would create intense debate, research, and indecision for the duration of the upcoming six-week summer holiday.

The Sunday League fixture list runs until around April most years and resumes in August and as an enthusiastic kid, each new season represents a fresh start – with the successes (and mostly failures!) of the previous season forgotten and the optimism of another title challenge, dreams of Premier League playing contracts and a season of laughs with friends.

As a schoolboy – from around the ages of 10 through to 15 (when I got my first job as a delivery boy for my local paper shop) – an integral part of my summer holiday routine involved identifying, researching and constantly badgering my dad for a new pair of football boots for the upcoming season.

Before the widespread introduction of social media, the process involved scanning various football magazines and catalogues such as FourFourTwo and ProDirectSoccer.

I’d sit with my best friend for hours and analyse the back pages of the national newspapers, picking out our favourite boots worn by players in that season’s international tournament or pre-season friendly schedule and squad photo.

Of course, during the process, a number of factors had to be considered – including the colour of that season’s kit, position on the pitch, playing style, and budget. 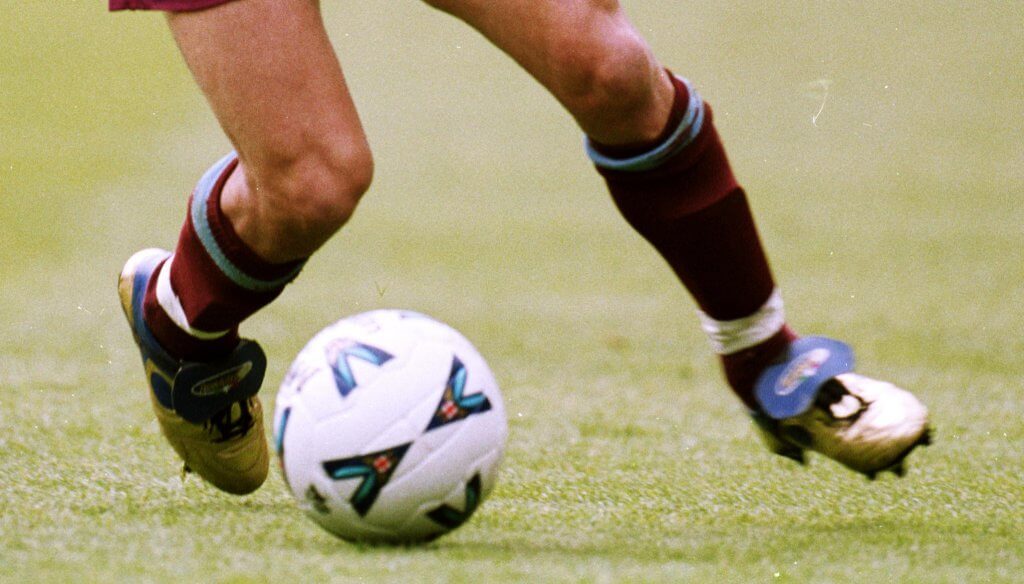 Once the decision had been made, my parents would take me from my local estate to the sports shop in the town centre – where they’d spend the equivalent of up to three weeks’ food shopping money, or two full tanks of fuel, on my dream pair of boots – a sacrifice that, looking back, made the annual event even more special, given they didn’t have this money readily available at the time.

The feeling of leaving the shop and hurrying home to meet my friend on the patch of grass that separated our rows of terraced housing, to lace up the boots we’d discussed all summer, is one that I’ve found impossible to replicate from the purchase of a material item as an adult.

Perhaps because the boots and the process of choosing them represented more than the ‘New Kangaroo’ leather and other modern technologies the manufacturers introduced each season. They represented a love for the game, excitement and sense of hope, that renews with the beginning of each football season – something that’s not left even now, as a supporter and part-time player in my late twenties.

So here’s a look back at some of my favourite and most iconic football boots and the players, eras and major events they represented back then, as well as what they said about the players who wore them. 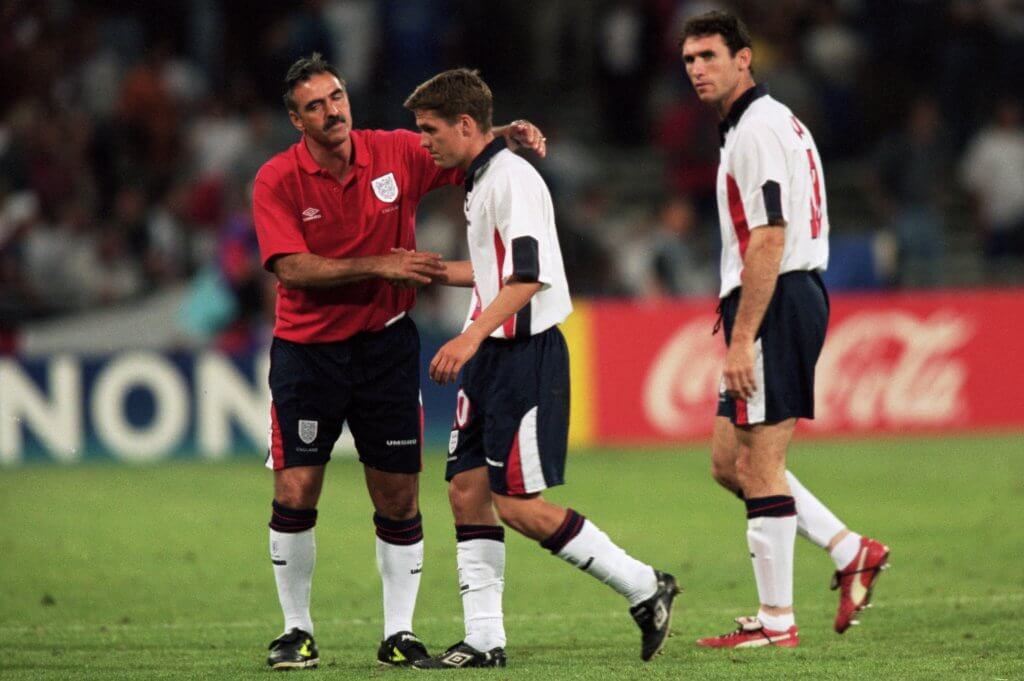 The Umbro Speciali 98 represented one of the last ‘old school’ boots in an era of lightweight technology, fluorescent colours and customisable accessories, as its soft leather upper, neatly folded tongue, sensible laces and traditional black and white colour scheme gave it an iconic, professional feel.

The Speciali 98 is heavily associated with the France 1998 World Cup Final tournament, in which England exited at the last-16 stage after (another) penalty defeat at the hands of Argentina.

The tournament saw the emergence of a number of players who went on to symbolise a generation: Beckham (who didn’t get off to the best of starts with his infamous red-card in the defeat to Argentina), Ferdinand, Neville, Scholes and most impressively, Michael Owen.

Owen, alongside the more experienced Alan Shearer, famously donned the Umbro Speciali 98 when he burst onto the scene with THAT goal against Argentina – a moment and a player I will always associate with the iconic design.

What the Umbro Speciali 98 said about you…

At Sunday League level, the Speciali is the preferred choice of the experienced campaigner. A player that knows his capabilities and is confident in them. This player doesn’t crave attention off the pitch, and often plays a key-role. Due to the versatility and durability of the boot, you can find Speciali wearing players through the spine of the team – a calm centre-half, dictating midfielder or cool target-man perhaps. 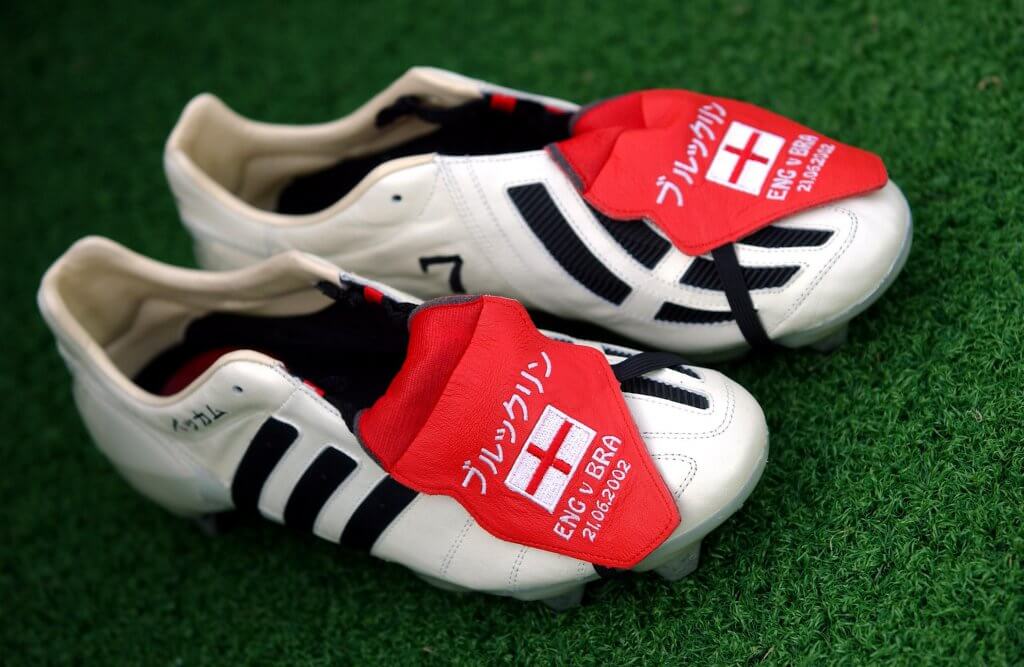 The Predator Mania 2002 symbolised the shift in attitude towards football boots and their purpose in the early part of the new Millennium. Durability, versatility and other more practical elements took a back-seat as the focus shifted towards style, performance and image.

It came in a range of colourways, ranging from the iconic black, red & white that’s synonymous with the brand, through to blue, silver, red and white, while the boot’s distinguishing feature was a leather tongue which covered the entirety of the lace section, held in place by an attached band, that wrapped around the sole – a complete novelty for young players at the time.

The spearhead of the campaign to market boots in a new way, and someone who will forever be associated with the iconic Predator brand and the Mania 2002 model, was David Beckham.

During the heights of Beckham-mania, England qualified for the 2002 World Cup in Japan and during the build-up witnessed a national frenzy as the focus became all about a broken bone in the foot of the England captain and his availability for the upcoming tournament. 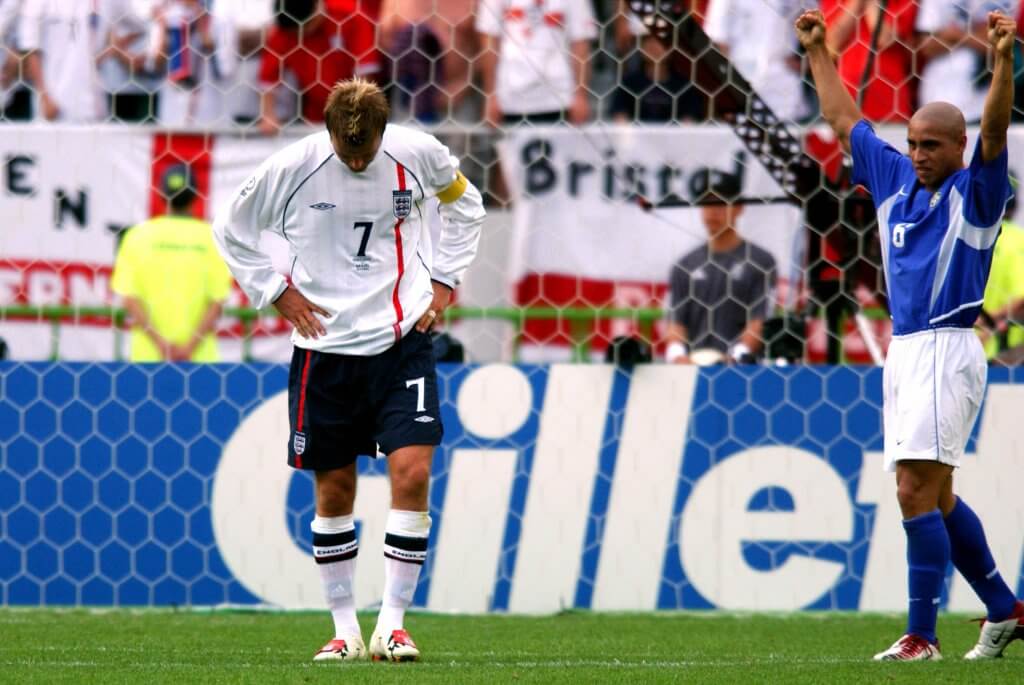 Beckham made the tournament and helped England reach the quarter-finals in the process, showing-off a customised pair of Champagne coloured Adidas Mania boots; while other iconic players showing-off the Adidas boots at the tournament included the likes of Zidane, Gerrard, and Kaka.

In 2004 Adidas release the Predator Pulse, an enhanced version of the 2002 Mania model which included a new sock-liner system that claimed to enhance ball-to-foot impact. The traditional Predator tongue remained in place, with the introduction of six rubber ‘fins’, that improved power and swerve when connecting with the ball.

Adidas released a royal blue & silver version of the 2004 boot, which Frank Lampard made famous as he finished the 2005 season with 16 goals and a player of the season award in Chelsea’s title-winning side; an era that saw the introduction of Roman’s riches and the “Special One” to the Premier League.

What the Predator said about you…

At park level, the Mania and Pulse would usually be worn by players standing over corners, free-kicks, and penalties, while the common understanding that the boot offered ‘extra swerve’, meant you’d find players wearing these boots often attempting glamorous diagonal passes and long-range shots.

The Mania could mainly be found in the middle of the park and was a tough-tackling captain’s boot of choice. You had to believe in your own technical ability to grace the local park in a pair of Predators – and you definitely had to have a bit about you to dare splash out on the 2002 Champagne version. 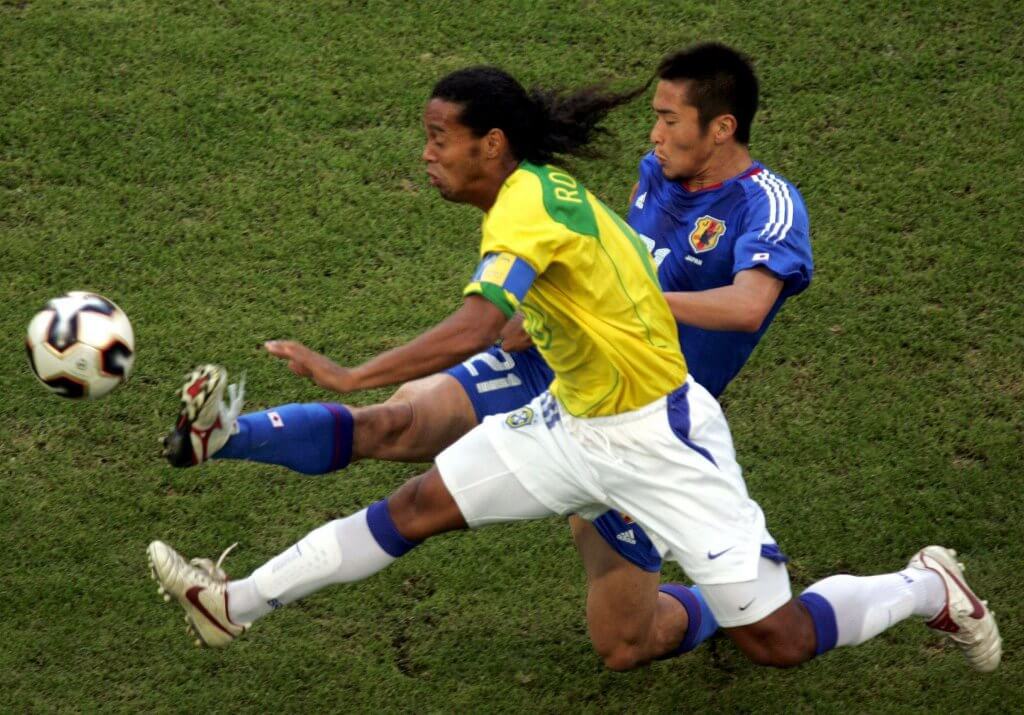 Nike released the Tiempo Air Legend in 2005 as the Internet age began to take hold of the footballing world. With the help of Brazilian legend and at the time world-footballer of the year Ronaldinho, Nike’s promotional video for the release of the boots, in which the superstar juggles a series of volleys off of a Camp Nou crossbar, went viral – achieving over one million views worldwide on YouTube.

The Legend itself proved a reliable all-round boot, which offered supreme comfort, with a soft ‘K’ leather upper, adjustable Velcro tongue and firmly supported heel. With the help of one of the last ‘Superstars’ of yesteryear Ronaldinho, before the modern-day emergence of Messi and Ronaldo, Nike made it cool again to enter the field of play in brilliant white boots.

The Legend came in a range of colour schemes, from the R10 gold & white to white & blue, white & red and the more traditional black & white – a range that proved so popular for so long amongst professionals and amateur players alike, it was re-released by Nike for a limited period of time in 2018.

What the Tiempo Air Legend said about you…

For the Sunday League star, the Legend could be found worn across the park and its status as a perfect ‘all-rounder’ meant you’d find the boot in all positions, from goalkeeper to goalscorer. You’d also see the boot donned by the likes of referees and coaches. As well as being functional and hard-working, those in the brighter colourways were also capable of trying to pull off the odd Ronaldinho ‘Flip-Flap’ from time to time during a game. 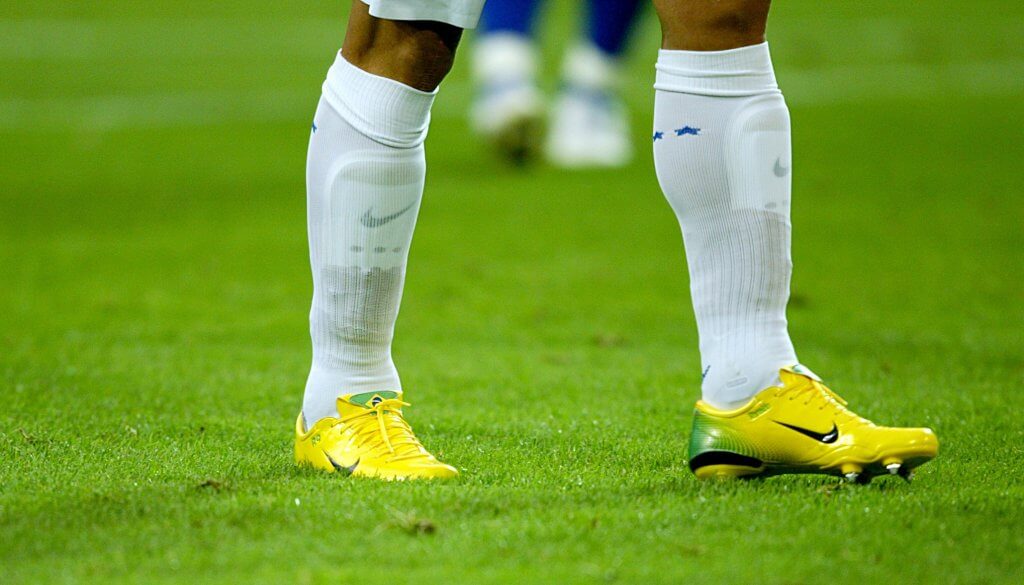 The Nike Mercurial Vapor range is synonymous with two things – Pace and Goals.  In 2006 Nike launched the Mercurial Vapor III in a range of bold colourways, that included royal blue, dark red, lime green, gold and the Brazilian yellow & green, while the boot’s lightweight design and classy looks optimised speed during an era of world-class foreign goal scorers in England’s top flight.

The Legend’s most famous advocate is unquestionably the Brazilian Ronaldo, who went on to have versions of the Mercurial Vapor range named after him and at the 2006 World Cup in Germany, the Mercurial Vapor III took to the field with other famous Brazilians goal scorers including Robinho and Adriano.

In The Premier League, the Vapor III lit-up the goalscoring charts – helping Didier Drogba to the golden boot with 20 goals, followed closely by Thierry Henry and a young trickster named Cristiano Ronaldo.

What the Nike Mercurial Vapor III said about you…

When it came to the amateur game, the Mercurial Vapor III would always be found across the front-line of an attack. The choice of pacey wingers with a trick or two up their sleeve and agile finishers playing on the shoulder of the back-line. As a defender, the emergence at kick-off of a winger in a pair of Vapor’s signalled a tough morning.

The Mercurial Vapor III was often accompanied by a diamond in the ear of the attacker, brave, knee-high socks and an equally brave hairstyle of some description. If you were going into a 50/50 challenge, you’d always be relieved to see a pair of Vapor’s entering from the opposite side.

Lee Farnhill is a 28-year-old football fanatic who has been a season ticket holder at Swindon Town for over 15 years.

Having played amateur football since the age of 10 he’s recently started managing a local 6-a-side team, made up of old school friends.

A keen writer he’s turned his attention to the thing he loves the most – football – and you can read more of his article at The Goal Nine Yards.