Peter Crouch’s Robot and the most iconic goal celebrations ever

On June 3rd, 2006, Peter Crouch brought us the "Robot" in a 6-0 win over Jamaica at Old Trafford, but was it the greatest celebration ever? Matthew Crist looks at some of the contenders.

Peter Crouch marked his second goal for England in a 6-0 win at Old Trafford on June 3rd, 2006, with a jovial jig which has gone down in folklore, but where does it rank compared other celebrations we’ve witnessed down the years?

The gangly goal-scorer gained almost instant hero status as he performed the dance during his hat-trick performance in England’s final World Cup warm-up in Manchester.

Crouch, who chipped a penalty over before going on to complete his hat-trick, recalled: “The manager wanted me in the team for both my goals and the celebrations. At a time when there was lots of negative press around the national side, he thought it brought back the fun and the smiles.”

As a result, the then Liverpool striker transformed perceptions of him among the England support having been booed on to the same pitch eight months earlier when coming off the bench in a qualifier.

So to celebrate the anniversary of one of the most iconic celebrations of recent times, here are some others which are still talked about to this day. 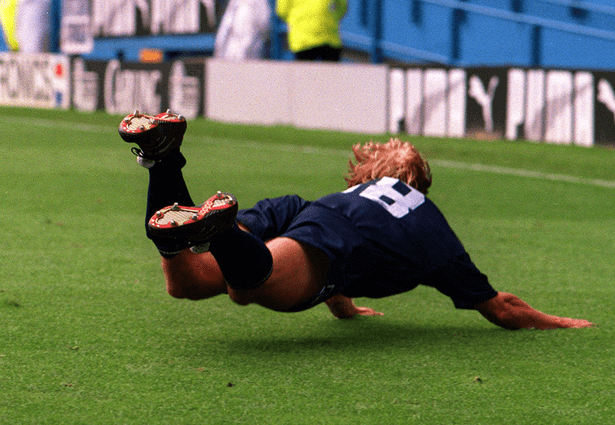 When Jürgen Klinsmann signed for Spurs from Monaco in 1994 the German international brought with him a fierce reputation, not just for scoring great goals, but for play-acting and diving, too.

On his debut for Tottenham, away at Sheffield Wednesday, the home fans greeted Klinsmann by holding aloft cards with diving scores, so after opening his account for his new club, Klinsmann needed no encouragement to mock his critics by sprawling full-length on the Hillsborough turf.

The celebration actually endeared Klinsmann to the British public, as well as making him a cult hero among Spurs fans overnight, though he later admitted that the idea wasn’t his but teammate Teddy Sheringham’s. 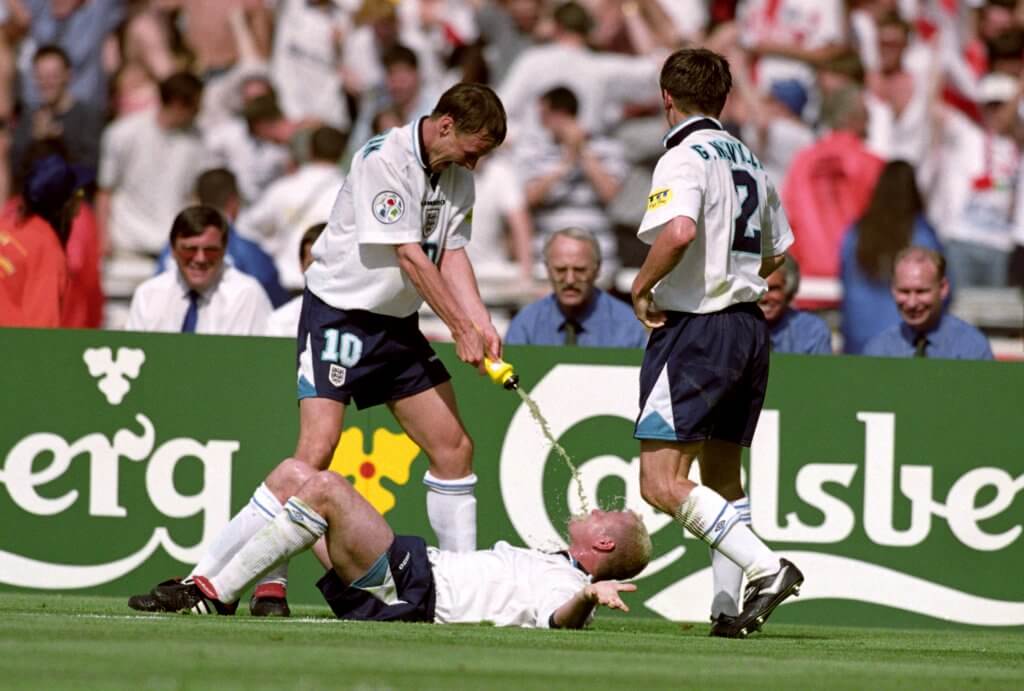 On a trip to Hong Kong prior to Euro ’96, Gazza and drinking buddy Teddy Sheringham were photographed enjoying themselves on a night out which brought fierce criticism from the tabloids just weeks before England hosted a major tournament for the first time since 1966.

The infamous snap caught a number of England’s stars laying back in a chair while alcohol was poured directly into their mouth in what became known as the “Dentist Chair,” while disbelieving supporters looked on in amazement at their heroes’ ability to put away the booze.

So after making a mockery of Colin Hendry and scoring one of the greatest England goals in Wembley history, there was only one possible celebration as Gazza raced behind the goal, lay on his back, and urged his teammates to spray water into his mouth in an off-the-cuff re-creation of that infamous incident. 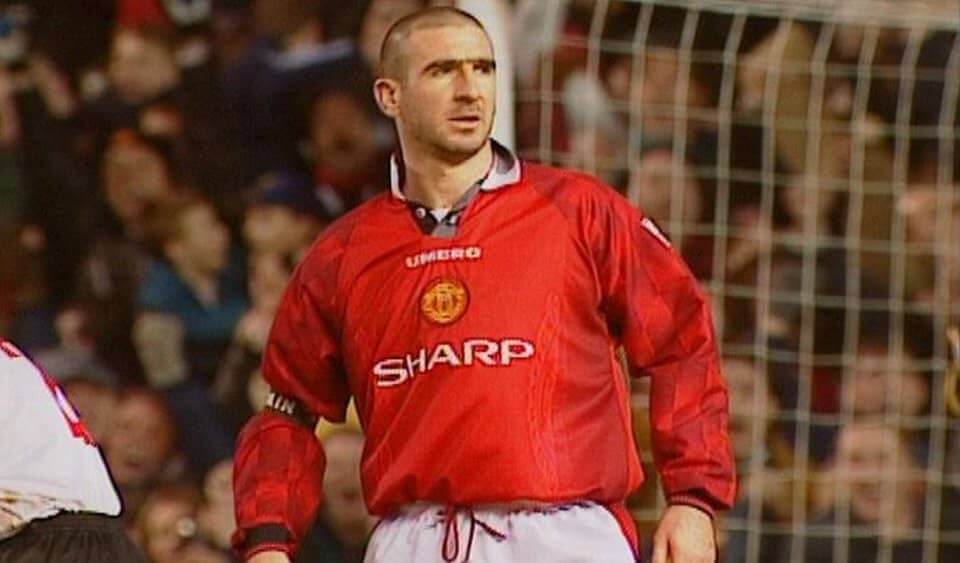 Having faced criticism in the press for recent under-par performances, Cantona responded in his next game in the way only he could, witha magnificent goal which has all but been overshadowed by his celebration that day.

Picking up the ball just inside the Sunderland half and turning his way past a couple of befuddled defenders, he played a one-two with Brian McClair before placing a precise chip over the stranded goalkeeper who could only watch the ball sail over his head.

As Old Trafford rose to acclaim one of the goals of the season, the Frenchman, collar upturned, simply looked around nonchalantly as if to say: “what is all the fuss about?” before being congratulated by McClair and the rest of his teammates – who appeared more delighted with the strike than the man himself. 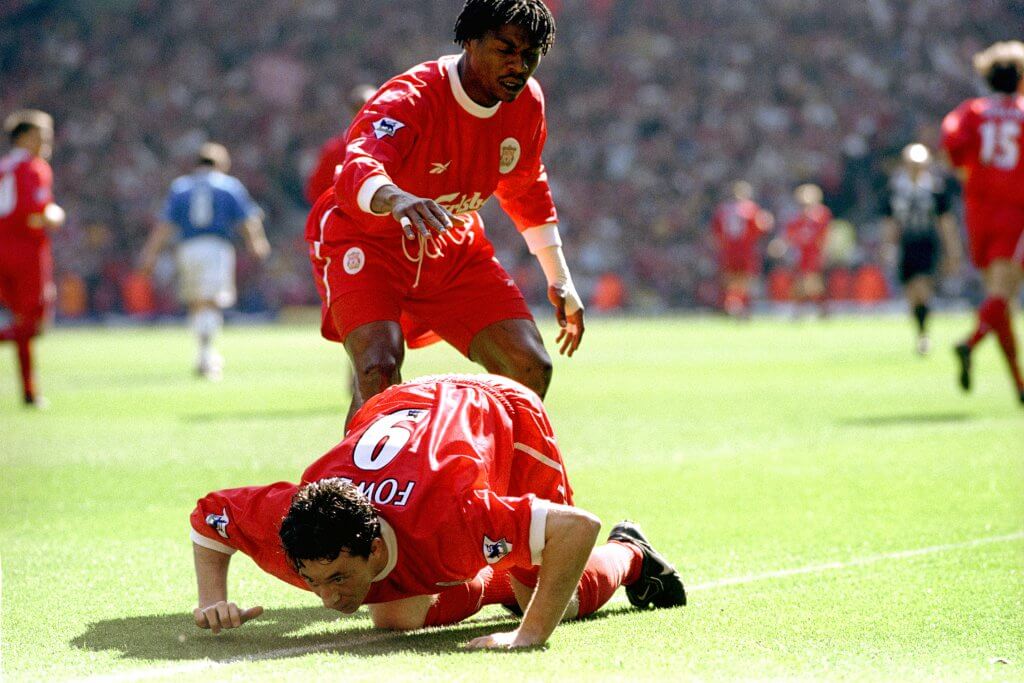 One of the more controversial celebrations of all time saw Liverpool legend Robbie Fowler respond to the abuse he’d received from opposition fans in a way only he could – which would ultimately land him in hot water with the authorities.

Throughout the Merseyside derby at Anfield, Fowler had been getting abuse from Everton fans based around the unfounded rumors of his alleged drug habits, so after scoring a penalty right in front of the away fans, he got down on all fours and sniffed the white line of the penalty area.

Fowler was fined two weeks’ wages for his celebration and received a four-game ban from the FA. Manager Gerard Houllier claimed it was a grass-eating celebration he had picked up from Rigobert Song – but nobody was buying that one. 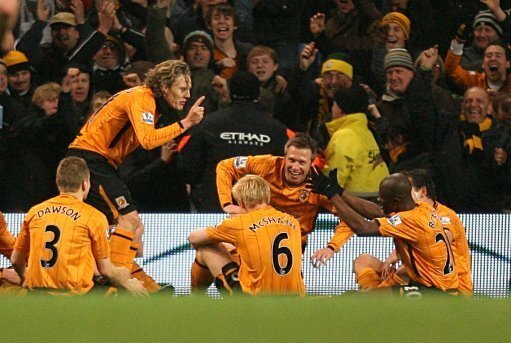 In 2008, Hull City manager Phil Brown made all the headlines when he gave his players a half-time dressing-down on the pitch as they trailed 4-0 to Manchester City.

So just 12-months later, when Jimmy Bullard scored to make it 1-1 against the same opposition, Hull’s players sat around Bullard while he pretended to give them a team talk in a light-hearted jibe at their boss’s actions.

Brown said afterwards it was a “fantastic celebration”, although Bullard revealed years later his manager told him to “wind his neck in” in the dressing room following the game. 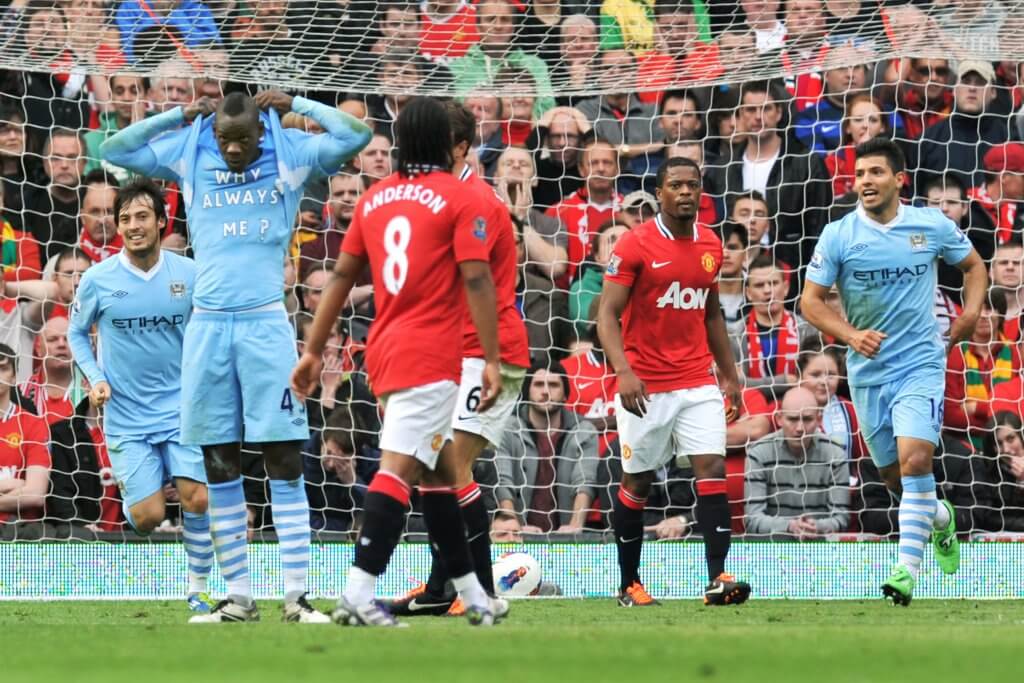 In October 2011, Manchester City stunned Old Trafford with a 6-1 win over Manchester United, but Mario Balotelli’s iconic celebration after opening the scoring will always be remembered as the iconic image of that day.

Having put the ball into the United net, Balotelli lifted up his shirt to reveal a t-shirt asking ‘Why always me?’ in a move which was seen as a dig at the British press who he claimed had hounded him since his arrival in England.

However,  the fact that Balotelli had set his bathroom alight after a firework was launched in his house just two days before might have had more to do with his unwanted press attention, not to mention a string of other misdemeanors a the time.