“I will always adore him as one of our biggest club legends.” Alan from United Journal reflects on the charismatic Frenchman who transformed the fortunes of the Old Trafford club and its manager in the process.

Out of two cup competitions and having won only two of their last 13 games, scoring just nine goals in the process, Manchester United were in desperate need of something special in the autumn of 1992.

Attempts to sign David Hirst and Alan Shearer fell by the wayside, while Mick Harford and Lee Chapman were also on United’s hit-list by all accounts, but the Red Devils would eventually opt for a player who wasn’t even on NASA’s radar at the time.

For many, it has become something of a “Where were you when you heard that Eric Cantona had signed for Manchester United?” moment.

But, put simply, obtaining the services of the enigmatic and unpredictable Eric Cantona would ultimately transform the fortunes of the Old Trafford club and its manager for the next two decades.

The club was still reeling having seen the league title slip through their fingers the previous spring as Leeds United pipped them to a league championship that had eluded them since 1967.

And if they were to have any hope of resurrecting a season that looked to be dying a death at an alarming rate, Alex Ferguson needed a goalscorer.

“His signing was a turning point. Sir Alex Ferguson could always stick to him for anything,” says Alan from United Journal. 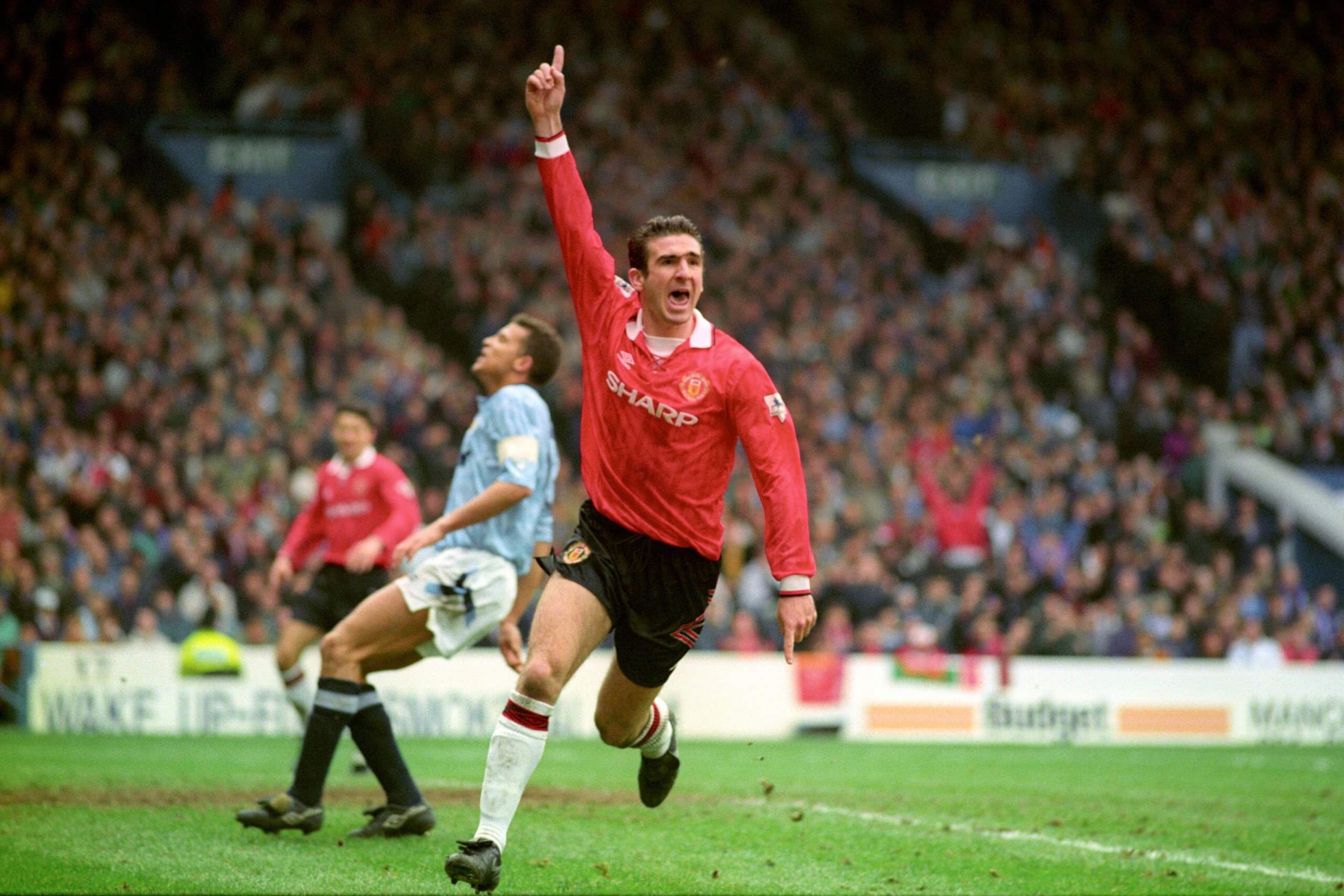 “Firstly, he knew what it was like to be a winner and that helped grow the confidence of his teammates.

“Secondly, this man didn’t give up. He gave the team an edge when it came to tough fixtures because he was a big game player.

“Cantona was one of the best in terms of technique and charisma. This made sure of his presence on the pitch even if he had a bad game.”

The story goes that as Ferguson and his Chairman Martin Edwards were meeting at Old Trafford to discuss potential strikers on their shopping list, Edwards’s phone rang.

On the other end was the Leeds United managing director Bill Fotherby, who was inquiring about the possibility of re-signing United full-back Denis Irwin.

Edwards shunned Leeds United’s approach immediately but then took the opportunity to ask if Leeds might sell them their initial transfer target, Chapman.

As he did so, Ferguson apparently scribbled the name of Cantona on a piece of paper and Edwards relayed the message to his counterpart with Fotherby promising he would get back to him within 24 hours – he called back just 60 minutes later.

So on November 26th, 1992, Eric Cantona found himself signing for Manchester United in a deal reported to be around £1 million with Ferguson’s assistant, Brian Kidd, apparently asking: “Has he lost a leg or something?” when being told the final sum. 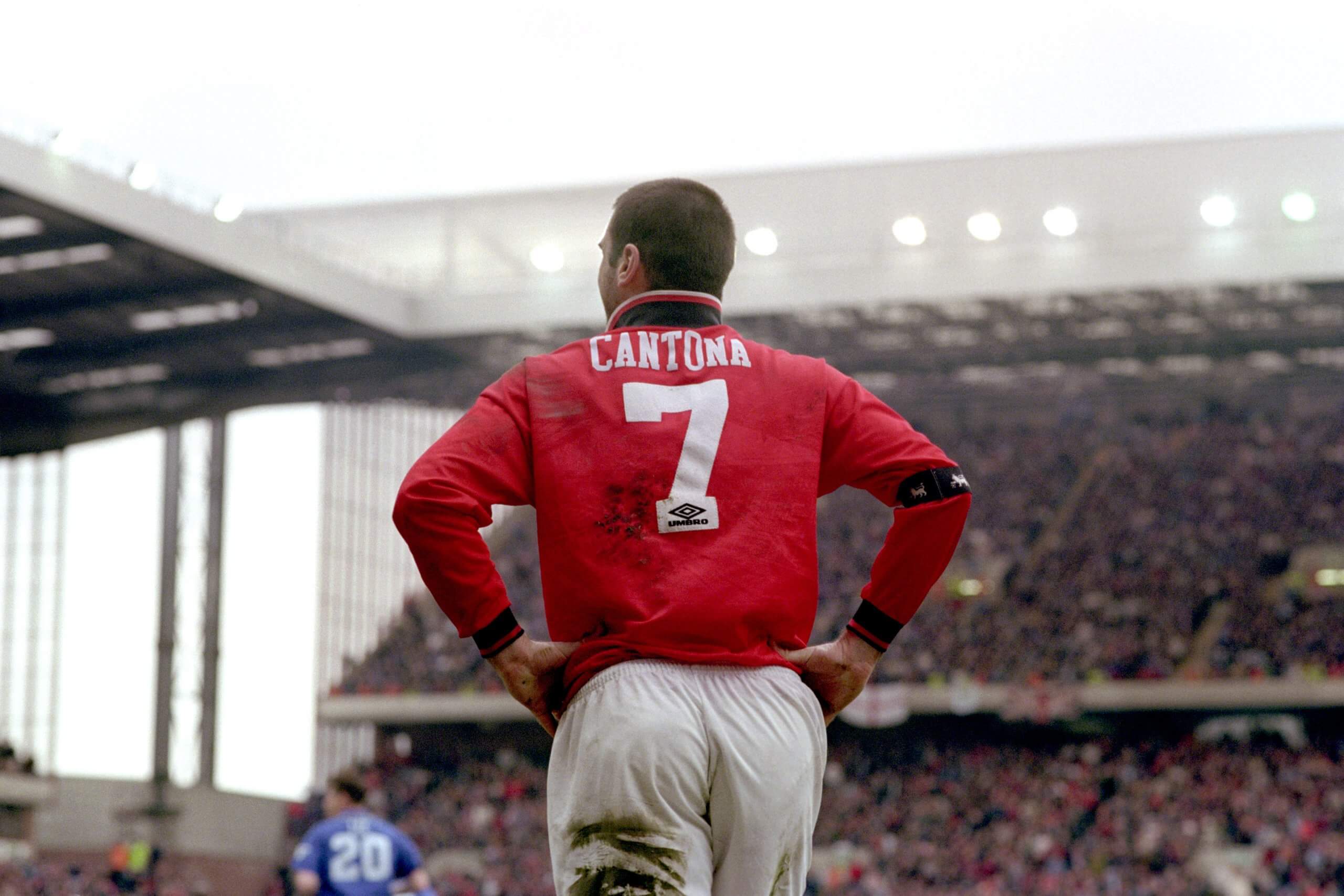 Cantona’s arrival had an almost immediate impact on the team and brought with it a winning mentality as a group of players who were low in confidence began to believe in themselves in a way they wouldn’t have previously and United finally won the league championship for the first time since 1967.

“Personally speaking, he was one of my favourites,” notes Alan.

“It might be a bit controversial but I think Cantona will always be United’s best player to wear the No.7 jersey close to Bryan Robson and Cristiano Ronaldo.

“He was a turning point in helping Sir Alex Ferguson’s side win their much awaited first League title.

“His personality empowered his teammates and his motto was to perform consistently at high standards for Manchester United.

As well as the turnaround in results Cantona was presiding over a number of key performances that installed a mentality of never giving up, something which had been so noticeably absent the previous season when United collapsed so spectacularly.

Manchester United won four titles in five years with Cantona in their ranks and would surely have won another but for a lengthy ban following an attack on a supporter at Selhurst Park in 1995.

His dedication and professionalism also made a huge impression on the likes of Paul Scholes, David Beckham and Gary Neville who were coming through the ranks when he first arrived.

He retired from football in 1997 with four Premier League titles, two FA Cups and 80 goals to his name in less than five years at the club.

“Love him or hate him, he was box office and was entertaining to watch in the Premier League.

“He was one of the main reasons for the growth of Sir Alex’s Manchester United side’s standard in the Premier League.

“He set the foundation for the Class of ’92 to establish themselves. For that main reason, I will always adore him as one of our biggest club legends.”

Alex Ferguson recalled years later: “If ever there was one player, anywhere in the world that was made for Manchester United, it was Cantona.”

No doubt, the Frenchman will surely be regarded as his greatest ever signing, taking place on this day in 1992.