Oldham Athletic: “This is massive for the whole town.”

“We want to help so badly, so to just involve us from day one and listen and be humble, that’s the best starting point.” - Matt Dean from The Boundary Park Alert System Podcast feels there is cause for optimism at last at Oldham Athletic.

Supporters have reacted with cautious optimism after a takeover of Oldham Athletic was agreed in what appears to be a major boost for the crisis-hit club.

The Premier League founder members dropped out of the Football League for the first time in its 115-year history last season in a campaign that was marred by angry protests against deeply unpopular owner Abdallah Lemsagam.

But now there appears to be a glimmer of hope on the horizon with the announcement that a longstanding and successful local business – whose identity will not be made public until the deal has been completed – has agreed to buy not only the club, but the surrounding land and stadium.

As part of the agreement, the sale of season tickets, sponsorship and commercial activity has been halted and will reopen following the takeover.

Music to the ears of the club’s fanbase, who were on the brink of planning more protests in the coming weeks and months. 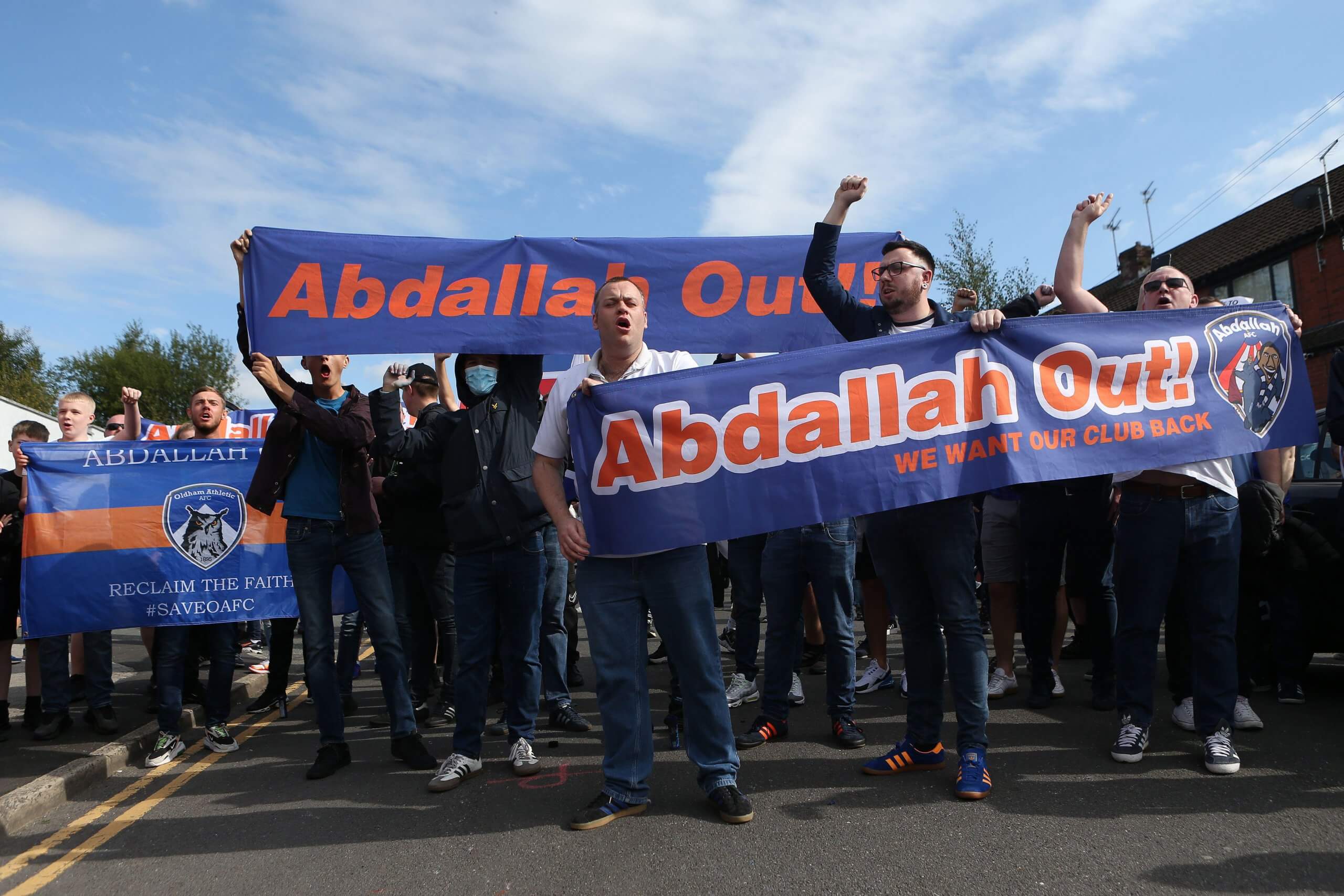 “The deal is going to bring the club and the stadium under local ownership. We sat down with Darren Royle, who helped broker the deal, and he’s told us all he can at the minute.

“He made it clear that the new owners want the fans involved, so we’re cautiously delighted and buzzing, because going into this season thinking that we were going to have to protest and fight is draining and tiring.

“So the thought of going into the season fully behind the team and John Sheridan is absolutely fantastic.”

During his four-year reign, Abdallah Lemsagam has overseen two relegations, including this year’s plummet to non-league for the first time in the club’s history.

Latics had once reached the dizzy heights of England’s top-tier in the early 1990s as well as FA Cup semi-final and Wembley League Cup final appearances.

But the Moroccan said in January that he would look to sell the club and find a new buyer after a series of off-field problems, controversies and fan protests that have marred his tenure.

However, a long-running dispute with the Boundary Park landlords over who owns the stadium and its newest stand, the Joe Royle Stand, appeared to delay any sale. 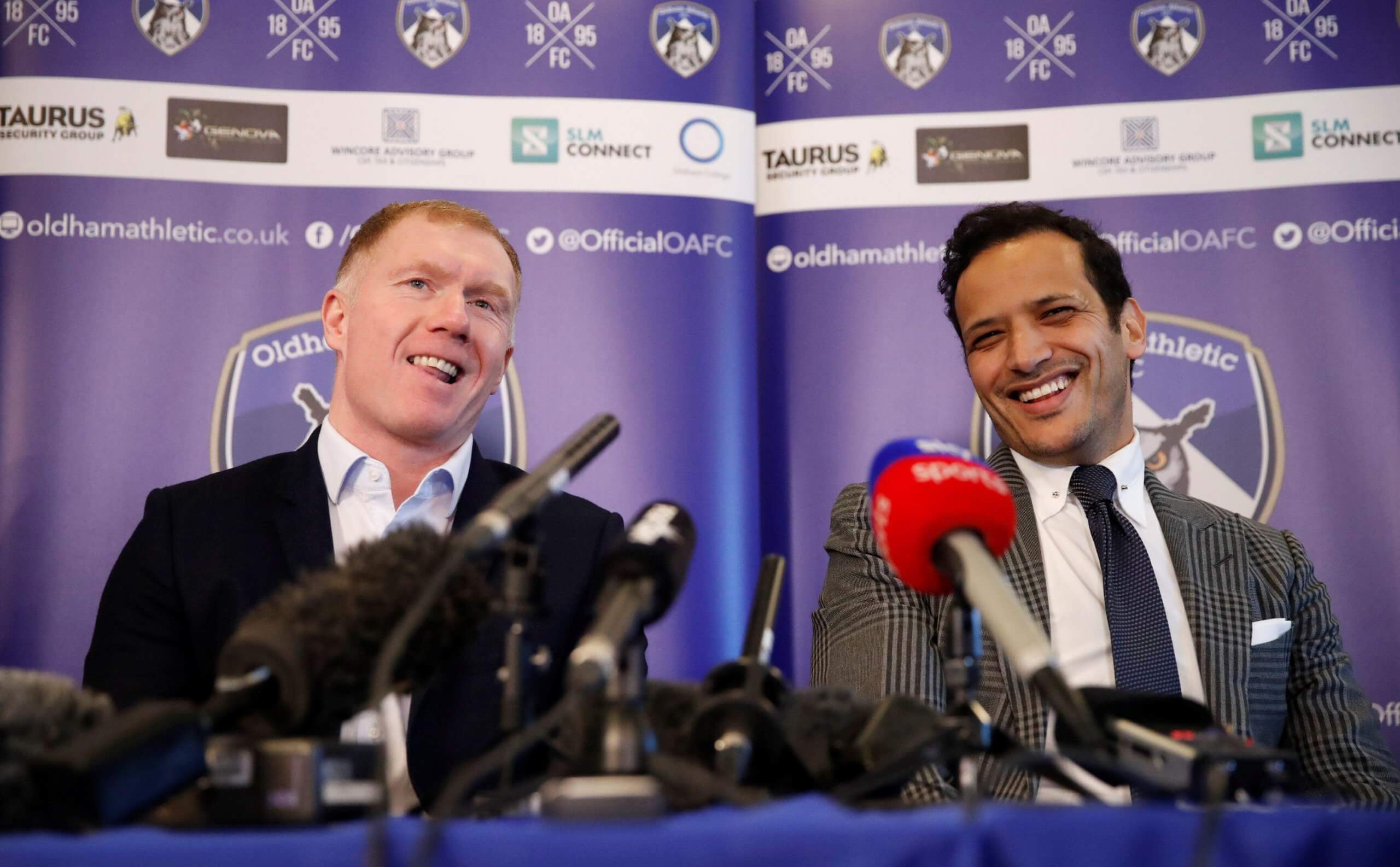 That was until the club confirmed in a statement on June 30th that both parties have come together and found a buyer who could take over in as soon as a month.

“This is massive for the whole town,” explains Matt.

“The football club has been in decline for a long, long time and the Lemsagam ownership just accelerated it and took it to a new low, but without a significant change in mind-set about what the football club was capable of it was always going to happen – we got what we deserved.

“As fans we either drifted away from the club and didn’t attend matches and accepted mediocrity – we were a poor League One team for 20 years apart from two good seasons.

“The fans didn’t do enough to turn things around or put pressure on the owners and it took this to wake us all up and as a fanbase now we’re awake.

“The expectations have changed for the club and for the town and we needed it because we’ve put up with mediocrity for too long and there is the potential for a top end of League One or Championship club at Oldham.

“The stadium, the size of the town, the heritage, it’s all there – personally I’m sick of hearing the world potential associated with this club and it’s been my intention to turn that potential into reality.” 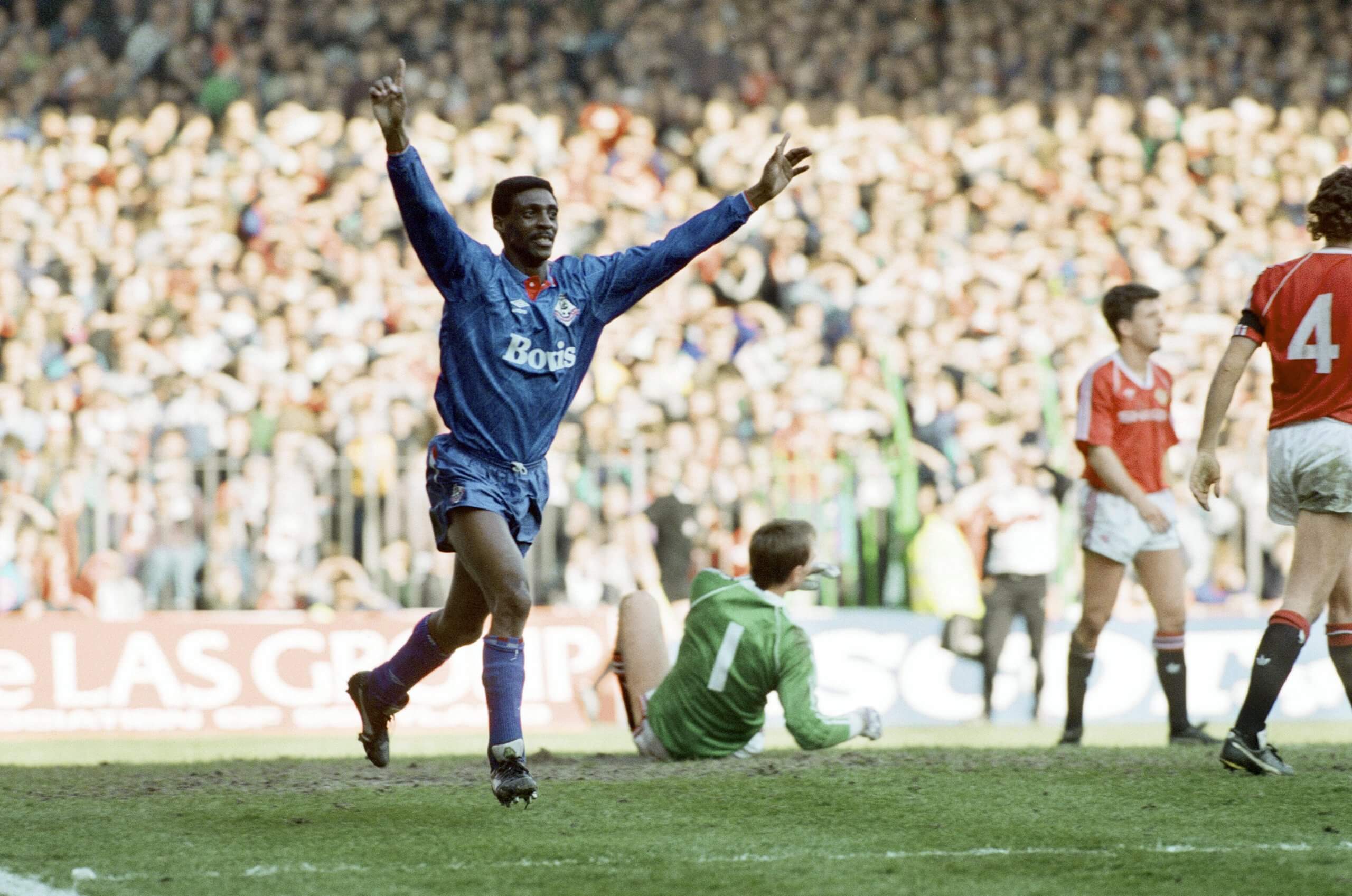 Whoever the new owners of Oldham Athletic are, they will have their work cut out, not just to rebuild a football club that has suffered a serious decline in the last 10-years – but also forge a better relationship with the long-suffering supporters who have watched their club’s demise play-out in front of their very eyes.

Oldham’s slide down the divisions began in 1994, when they matched their 1990 run to the FA Cup semi-finals but finished second-bottom after three seasons in the top tier.

Three years later, in 1997, the late-season appointment of Neil Warnock failed to yield the results they needed to stave off another relegation.

Relative stability followed, with 21 seasons spent in the third tier of English football, including chances in the playoffs in 2003 and 2007 – but in 2018, the club dropped to League Two and four years on they will play non-league football next season.

“The new owners have a really, really, good idea of how not to behave at Oldham now,” says Matt.

“If they do pretty much the opposite of everything that was done before them then that will be a really good starting point.

“We’ve done a lot of work as fans over the last three years to understand what the issues are, what’s gone wrong and what needs to be done going forward.

“Talking to us would be a really good point to start from a community and fan point of view as well as having a plan in place for the next five years to turn this place around and make it a place we all love going to again and address the key issues that have been ignored for too long.

“We want to help so badly, so to just involve us from day one and listen and be humble, that’s the best starting point.” 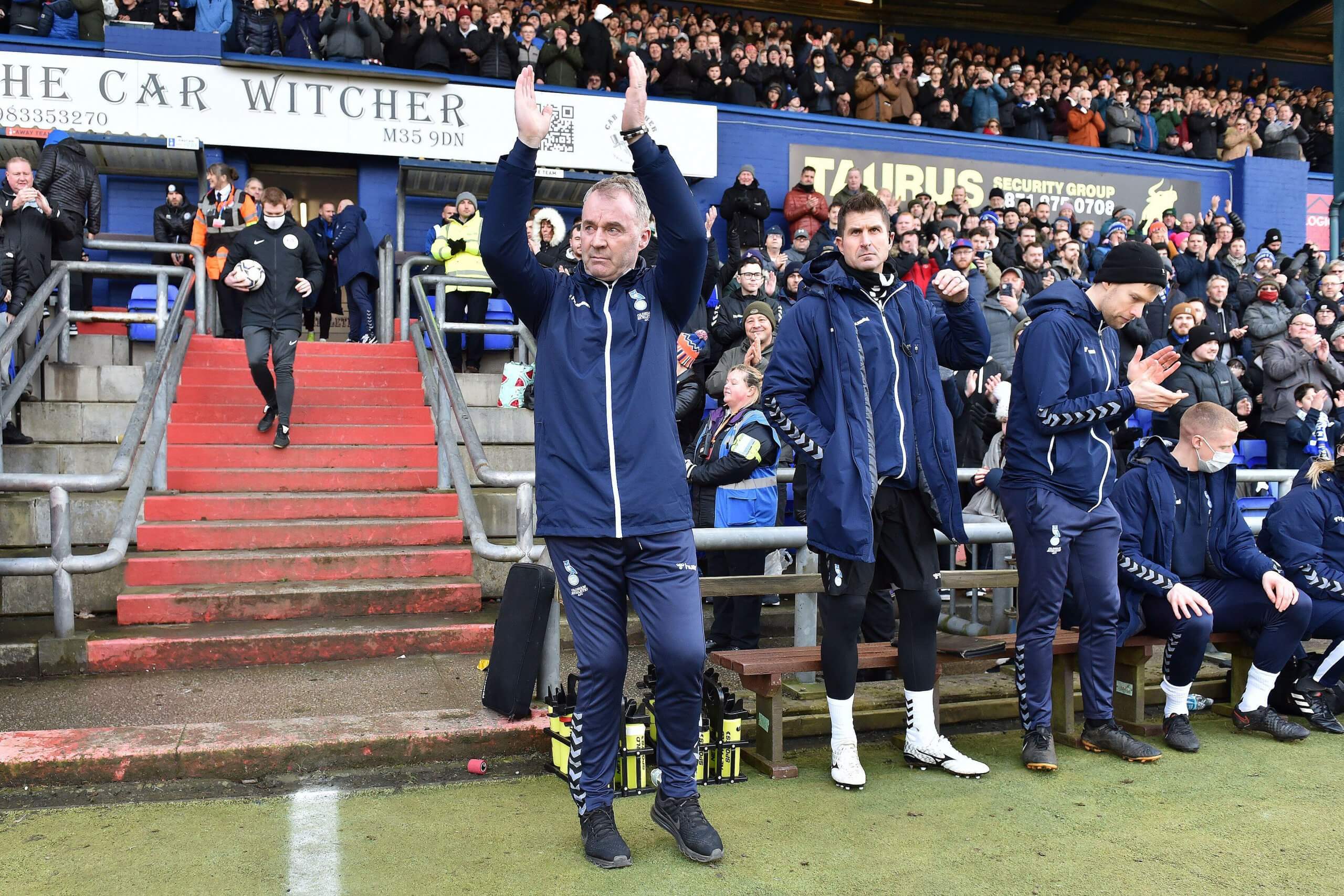 Oldham will kick off a first season in the National League in August as they look to regain their league position once more.

And their spirits will also be boosted by the news that boss John Sheridan will be staying on for the season after failing to keep them in League Two last year when he returned in January for a fifth spell in charge.

No doubt there will be extra pressure due to the fact that the Lattics are the first club to have played in the Premier League that have been relegated out of the top-four English football leagues.

But Matt feels that if there is even the smallest sign of progress, then that will be enough for the fans that have stood by their club thick, but more-often-than-not, thin.

“This is absolutely the boost we needed to get out of the National League,” he reveals.

“We were going into this season planning to boycott games, season ticket sales were very low and Boundary Park was going to be virtually empty.

“We expect season ticket sales to be around 4 to 5,000 once this deal is complete and Boundary Park will be one of the most exciting places to be in the league next season. 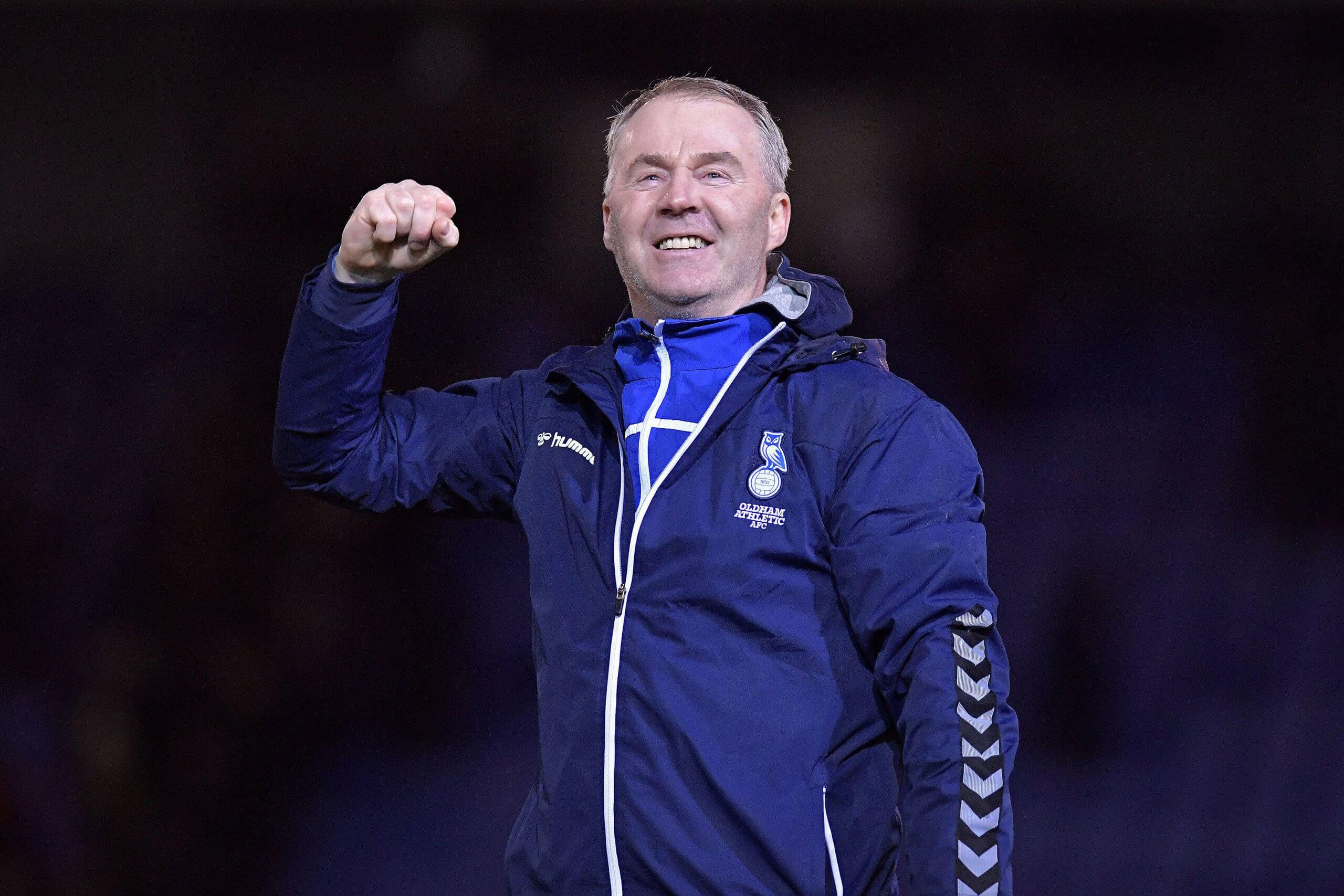 “Whether or not we can pull together a team quickly enough to compete this season, I don’t know, but if this deal does go through the comparison is huge.

“The whole mood around the football club and the town is lifted so hugely going into this season.

“We told Shez the other day we are behind you 100 percent and we’re going to get Boundary Park rocking next season.

“We’re the first club to go from the Premier League to the National League and that’s one hell of a downward spiral.

“We need to turn that momentum around – we’ve had two promotions since 1974 and I’ve seen one of them – it’s just so depressing.

“So we need to get that upward momentum going, it doesn’t matter if it starts this season, next season or the season after, but at some point, that push upwards has got to start happening.

“As long as we are going in the right direction that will please the majority of Oldham fans because we’ve not experienced it for a very long time.”