Official: Liverpool are a one-man team

In football parlance, the phrase ‘One-man team’ is one of the oldest in the book. It’s up there with ‘Lost the dressing room’ or ‘Good touch for a big lad’. But what does it actually mean?

Typically it’s a phrase thrown around to discredit a team who are perceived to be reliant on one player, usually a smaller team, with the perception being that without said player they would struggle.

This season it’s Crystal Palace who have been on the end of accusations about their overdependence on one man â€“ Wilfried Zaha. And while it’s true the Ivorian has played an integral part in maintaining their Premier League status he isn’t even their top scorer. That honour goes to skipper Luka Milivojevic. Yet little is written or said about the Serbian midfielder.

All of which got us thinking. Which Premier League sides, if any, are actually one-man teams? Our friends at Football Whispers did the number crunching.

In order to work it out we looked at each team’s top scorer and top assist maker. If they weren’t the same player, we took the top scorer and added his assists before taking that number as a percentage of the side’s goal tally.

Here’s what we found-

The team most reliant on one player: Liverpool

Depending on your point of view this will or won’t come as a shock. With the Premier League’s top scorer in Mohamed Salah it probably shouldn’t be a surprise that the Egyptian has scored a healthy percentage of the Reds’ goals on his own.

However, what you might not realise is the former Chelsea and Roma forward has also chipped in with more assists (10) than any of his Anfield team-mates. So many plaudits have been laid at the feet of Liverpool’s front three yet, with 42 goals and assists in the league, no-one has had more involvement. 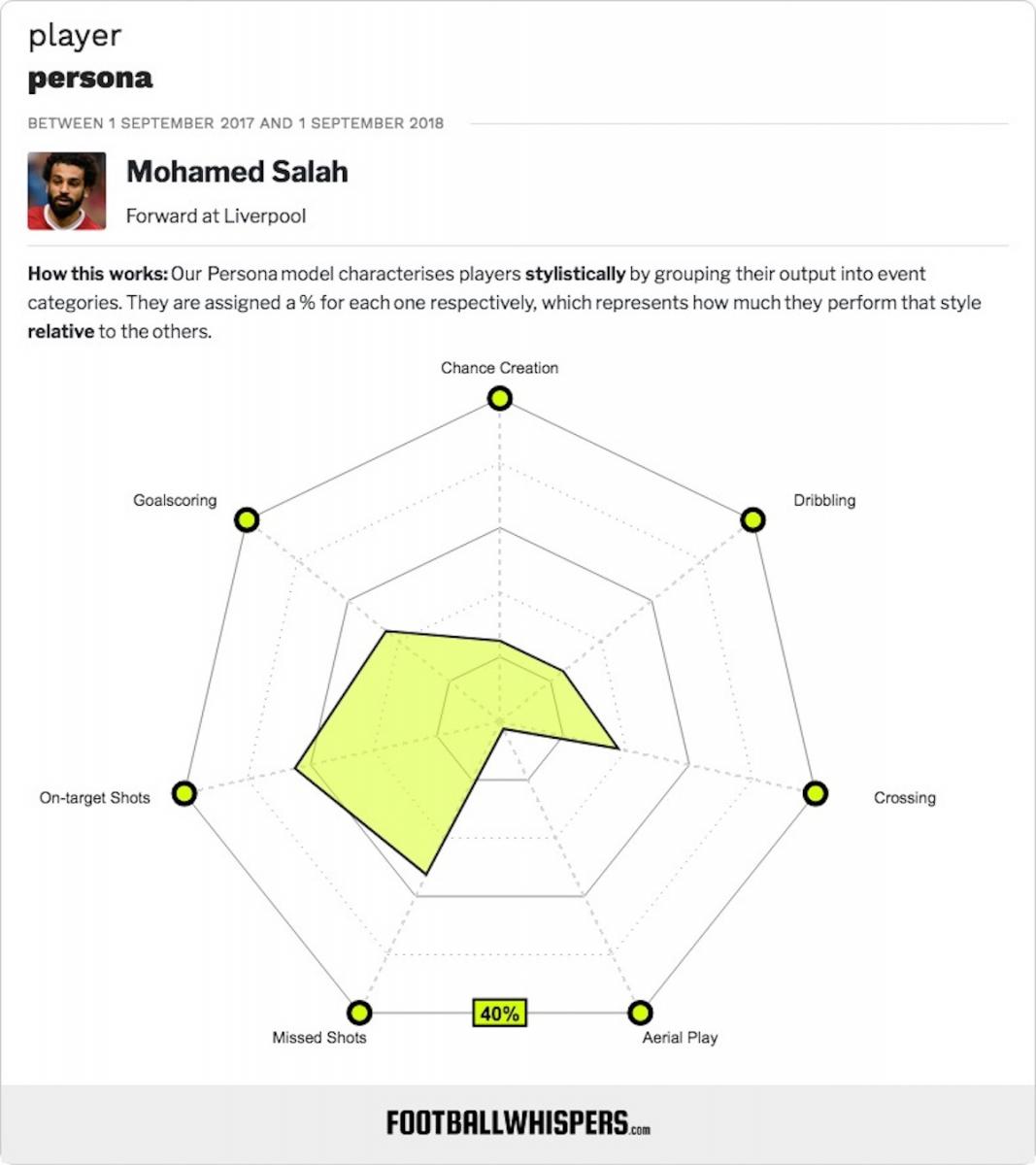 Luis Suarez (35.37), Lionel Messi (34.6) and Harry Kane (28.97) were all projected to have higher goal contributions. Of that trio only Messi (46 goals and assist) managed more than Salah although Suarez (36) and Kane (32) punched above their weight.

Typically the phrase one-man team has negative connotations but in this context it’s not particularly fair. Liverpool are third in Europe’s top five leagues for scoring attempts this season (638) behind only Real Madrid (683) and Manchester City (665). Which suggests any elite finisher would have filled his boots playing in Jurgen Klopp’s side. 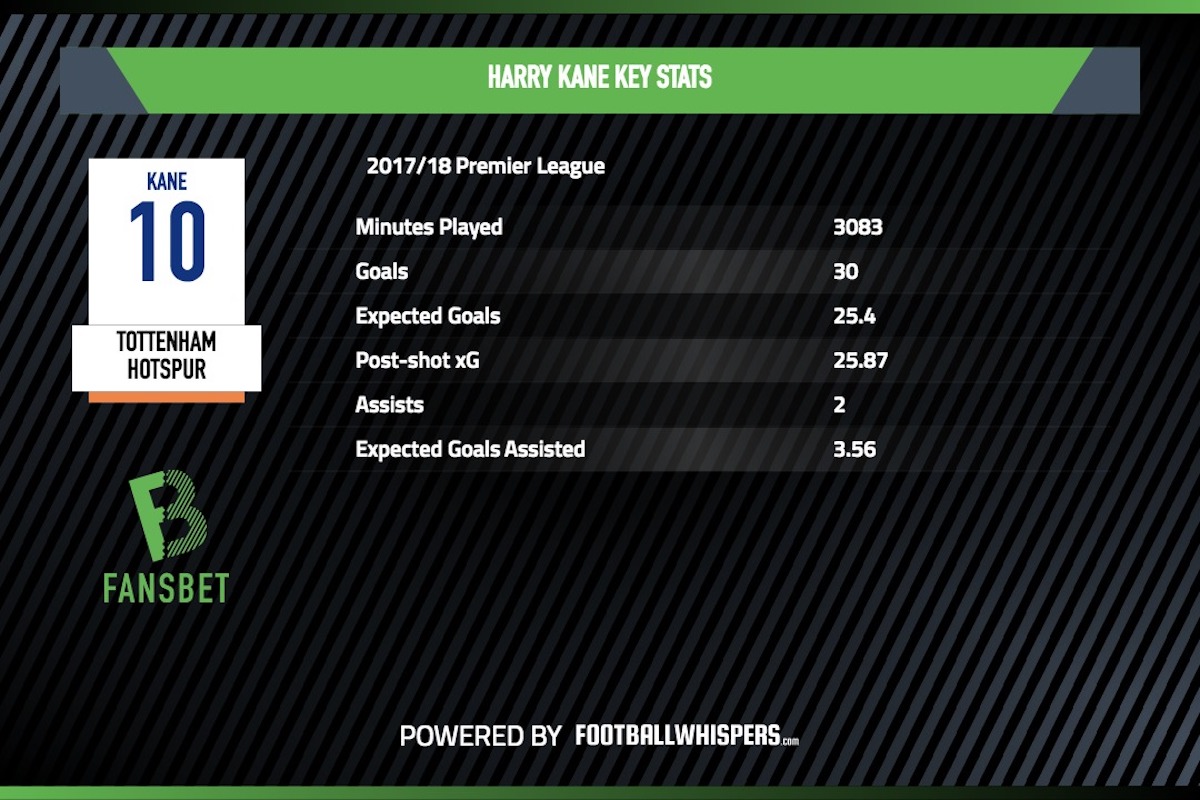 In much the same vein as Liverpool, there can be little surprise that Kane has scored 40.5 per cent of Tottenham Hotspur’s 74 Premier League goals this season.

However, the fact the England international managed just two assists means his overall contribution is 43.2 per cent, the second-highest in England’s top flight. Christian Eriksen, with ten assists and as many goals was next to Kane but with just a 27 per cent stake.

The difference between Kane and Salah, however, is interesting. The Spurs has more shots per 90 than any other Premier League player (5.37) and across Europe’s top five leagues he is third to Cristiano Ronaldo (6.98) and Messi (5.93).

Salah, by contrast, is only ninth with 4.43 shots per 90 which makes him a more clinical finisher on the basis of his conversion rate. For context, the now-departed Philippe Coutinho (4.35) was Liverpool’s second-most frequent shot taker. The drop off to the next Spurs player is more sheer, Son Heung-min rattling off 2.93 efforts per 90.

The team least dependent on one player: Southampton

Sharing the goals around is a good thing, we’re told. But Southampton, having only secured their place in the Premier League in the final week of the season, might beg to differ.

With 37 goal the Saints were the top-flight’s sixth-lowest scorers though, conversely, their xG of 42.39 was the 12th best which suggests wayward finishing on the part of their forwards.

Charlie Austin was the South Coast side’s top scorer with a lowly seven goals, but as a percentage of their total that came out at just 18.9 per cent. And, as he didn’t chip in with an assist in an injury-blighted season, that was his total goal contribution.

The next lowest was Watford’s Abdoulaye Doucoure. The Tottenham transfer target scored seven and assisted three to claim a 22.7 per cent share of the Hornets’ 44 league strikes. 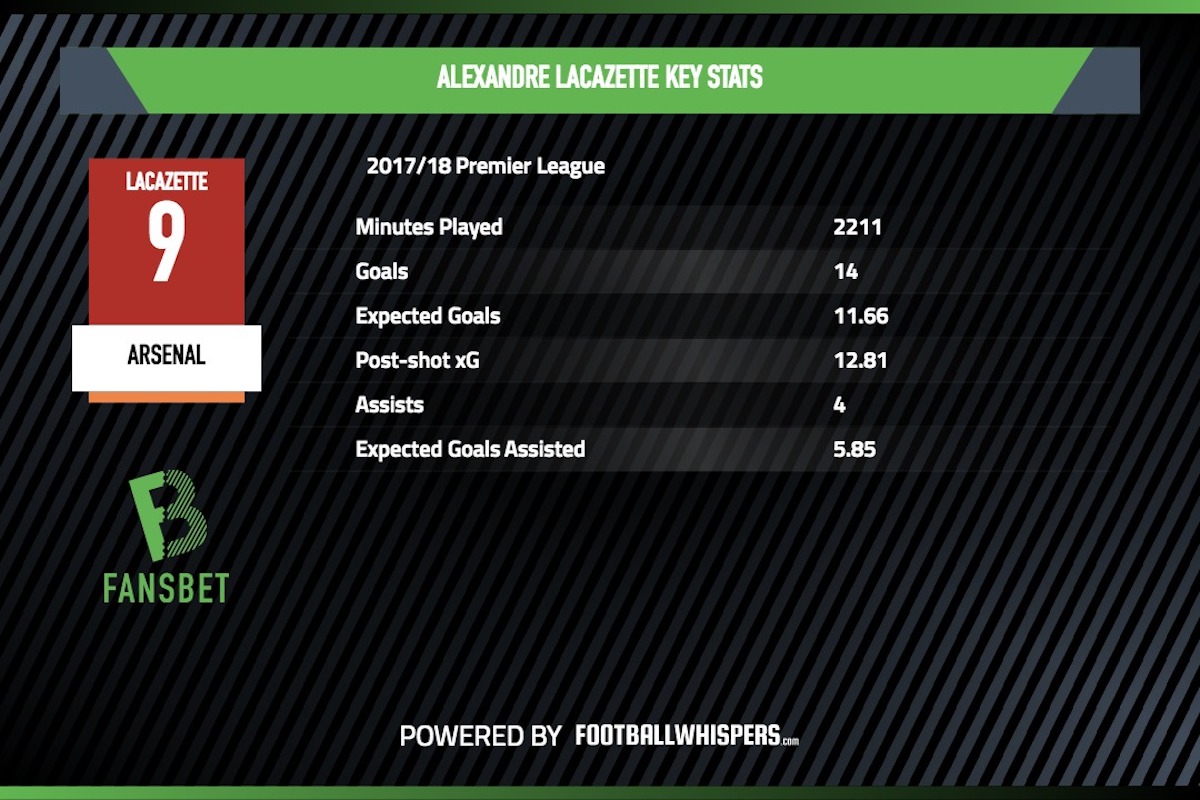 The best, and worst, of the rest

Stoke City were another side heavily reliant on the goals of one man but Xherdan Shaqiri, who scored eight and assisted a further seven, could not keep the Potters up on his own.

Overall the Swiss maestro had a hand in 42.8 per cent of Stoke’s 35 Premier League goals. But that was not the Potters’ problem. The lack of support from the rest of the club’s forwards was the reason their ten-year stay in the top flight came to an end.

Mame Biram Diouf got six from 30 starts while Peter Crouch and Eric Maxim Choupo-Moting tied with five apiece. After that the next highest scorers each had two. Of that trio only Crouch (4.03) over performed against his xG. Diouf (8.03) and Choupo-Moting (7.07) both fell short.

Another side who shared the goals around well but to little avail was Arsenal. New-boy Alexandre Lacazette top scored with 14 goals and registered four assists. His total contribution of 18 represented 24.3 per cent of the Gunners’ 74 league strikes â€“ the joint second-most in the top flight.

And while the former Lyon hitman was largely condemned for his output during his maiden season in England, his post-shot xG was just 12.81 meaning he actually out-scored against his projection.

Keeping them out at the other end was Arsenal’s downfall.