Norman Hunter: The Leeds legend who was more than just a hard man

His nickname may have been 'Bite Yer Legs' but as Matthew Crist explains, there was so much more to this tough-tackling defender who has died aged 76, than just the ability to put the fear of God into his opponents.

He was an iconic figure of the 1960s and ’70s; a tough-tackling centre-back with an abrasive style and a formidable left foot who put the fear of God into forwards across Europe while being the linchpin in a side which is still regarded as one of the best of their generation.

Norman “bites yer legs” Hunter, as he became known, performed an uncompromising and committed role at the heart of the Leeds defence and was a vital element in a team that for much of its reign was widely criticised for their style of play.

Part of a group of hard men who populated the game in the 1960s, along with the likes of Liverpool’s “Anfield Iron” Tommy Smith and Chelsea captain Ron “Chopper” Harris, he was the archetypal defender of his era.

Apparently, when he sustained an injury in a game at Elland Road, Don Revie’s veteran right-hand man Les Cocker was informed: “Hunter has broken a leg,” before the coach allegedly replied: “Whose is it?”

But there was much more to Hunter’s game and his reputation often does a disservice to a truly outstanding footballer who was known for his steel, but also knew how to play the game – a defender of the highest calibre who was perfectly at home in the top flight, as well as the more nuanced surroundings in Europe.

He was an essential part of the Leeds United team that achieved such success and notoriety under Don Revie in the 1960s and 70s while also being a member of England’s World Cup-winning squad of 1966. 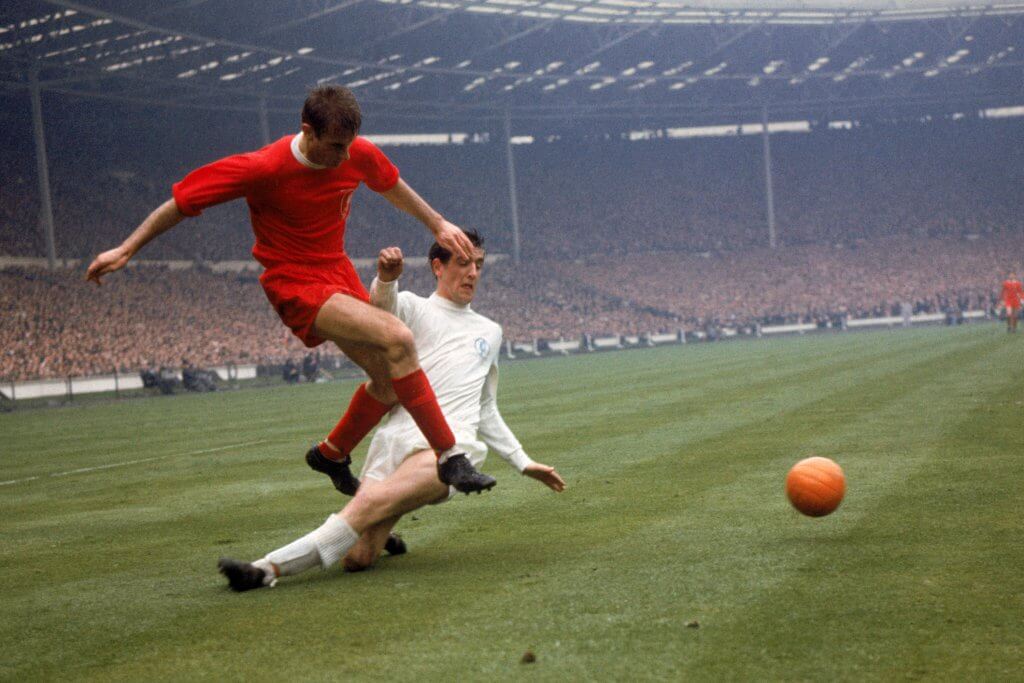 Born in Gateshead in 1943, Hunter moved to Elland Road when he was 15, sacrificing a career as an electrical fitter and made his first appearance for the club against Swansea at the age of 18 on the 8th of September 1962 as Don Revie’s side won 2-0; before going on to become one of the greatest centre-backs the game has ever seen.

Establishing a formidable central defensive partnership with Jack Charlton and playing 726 games in 15 years at the club, Hunter was the key component in a side that won the First Division title in 1969 and 1974, the FA Cup in 1972, the League Cup in 1968 and the Inter Cities Fairs Cup in 1968 and 1971.

And it could so easily have been more; five-times Leeds finished second in the First Division and were three-times runners-up in the FA Cup. Twice, in European competition finals, they were also on the losing side.

In the Cup Winners’ Cup against Milan in 1973 Hunter was sent off when his frustration boiled over in the closing seconds, while in the European Cup final against Bayern Munich two years later United tasted defeat once more; both losses which were blamed on dubious refereeing decisions at the time.

Often an unsung hero, Hunter’s fierce tackling would provide opportunities for the club’s more creative players, like Billy Bremner and Johnny Giles, to whom he would feed the ball that he so often won, allowing them to mount a devastating counter-attack in the blink of an eye.

In one of his most notorious misdermeanors, in a match between Leeds and Derby County in 1975, he came to blows with his England teammate Francis Lee which would lead to both being dismissed and as the pair left the field the argument turned into a spectacular fistfight as all hell broke loose around them.

But despite his on-field reputation, off the pitch, Hunter was a smiling and friendly individual who was hugely popular with all he came in contact with and was so highly regarded and respected by his peers that he was named the first winner of the Professional Footballers’ Association Player of the Year award in 1974.

Hunter won the first of his 28 England caps against Spain in December of 1965 and was picked for the England squad for the 1966 finals, though didn’t feature in any of the games in that historic tournament which saw England win the Jules Rimet Trophy by beating West Germany in the final at Wembley.

Often in the shadow of another, more cultured, No 6 – Bobby Moore – only the 11 who played in the final that day received a medal, although Hunter finally got one after a successful campaign to have them awarded for all members of England’s triumphant squad at a Downing Street ceremony in 2009.

After 14 years and more than 500 league appearances for Leeds, Hunter finally left the club he loved in 1976, signing for Bristol City where he played more than 100 games for the Robins, before a brief stint at Barnsley and then a distinguished career as an analyst and summariser on Leeds games for BBC radio.

But it was at Elland Road where Hunter wrote his name into legend, a man who epitomised the style and philosophy of Revie’s team that won so many plaudits but also attracted fierce criticism for their ruthless, physical approach.

“You never intentionally went out to hurt anyone,” he once said. “But the will to win became so strong that you’d get wound up – and the red mist would come down sometimes. Of course, you’d always pick the player up and say ‘I’m very sorry about that, ref.’”