Nobby Stiles: The toothless tiger who roared for club & country

Nobby Stiles won two league titles and a European Cup with Manchester United as well as being part of England's victorious 1966 World Cup side.

Bobby Charlton once described Nobby Stiles as a “dog of war” who could be depended upon to shut down danger wherever it materialised on a football pitch, and few who saw the tenacious, tough-tackling, midfielder in action could disagree.

Norbert Peter Stiles, known as Nobby, was born during an air raid in the Manchester suburb of Collyhurst in 1942 and would become one of the most iconic figures of England’s 1966 World Cup victory as well as a pivotal part of Manchester United’s 1968 European Cup-winning team.

Stiles supported Manchester United as a boy and his talent was recognised playing for England Schoolboys at the age of 15 in 1959, eventually achieving a childhood ambition when, in the same year, the club he loved offered him an apprenticeship.

He would go on to become a fulcrum of one of the club’s greatest ever sides, making almost 400 appearances for the Red Devils between 1960 and 1971 and helping them win two league titles as well as the European Cup in 1968.

Despite being just 5 foot 6, wearing dentures and being short-sighted, United manager Matt Busby saw something in the tenacious youngster and the one-time altar boy with Stiles being given his debut as a full back in October 1960 against Bolton Wanderers.

His passing ability and fearless ball-winning skills would result in him being converted into a holding midfield player whose role was often to regain possession and allow his more skilled teammates like Bobby Charlton and George Best to utilise the space more effectively.

Despite not being selected for the Manchester United side which won the FA Cup in 1963 against Leicester City, he did win the First Division title with the club in 1965 and again in 1967, though the pinnacle of his club career would come 12-months later when United beat Benfica at Wembley to become the first English club to win the European Cup. 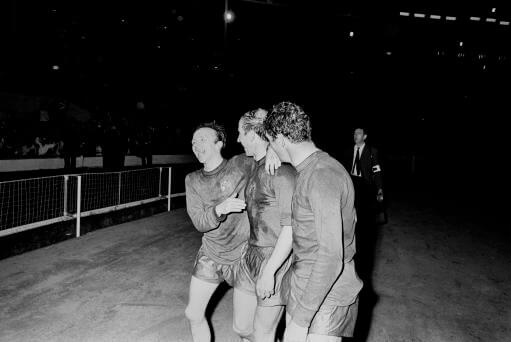 Like Busby, England manager Alf Ramsey knew he had to maximise the talents of Charlton and turned to Stiles – who thrived in the role of enforcer as much for his country as he did for his club.

Stiles made his England debut against Scotland at Wembley in April 1965, cementing his place over the next 12 months with a series of impressive performances.

A skilful and creative midfielder, Stiles was an uncompromising tackler and his robust style was the subject of some criticism from his opponents, particularly when he was blamed for an injury to France midfielder Jacques Simon during the 1966 World Cup finals, though England manager Alf Ramsey stood by his man.

“By all accounts, the FA selection committee told him in no uncertain terms I couldn’t play and that England needed to make an example of me.” he later explained. “I was a liability, they said. Alf told them he’d resign if he couldn’t pick who he wanted. He was prepared to resign in the middle of a World Cup over me. I never found that out till he’d died, Alf. What a man.”

Ramsey’s resistance paid off, however, and not only did Stiles help see off a hostile Argentina side – famously described as “animals” by the usually polite Ramsey – he then nullified Portuguese superstar Eusebio in the semi-final as England reached the Wembley showpiece.

Following England’s extra-time victory over West Germany in the final, his jig around the Wembley pitch, false teeth pulled out, socks pulled down, parading the Jules Rimet Trophy to the crowd, remains one of the most defining images in English football. 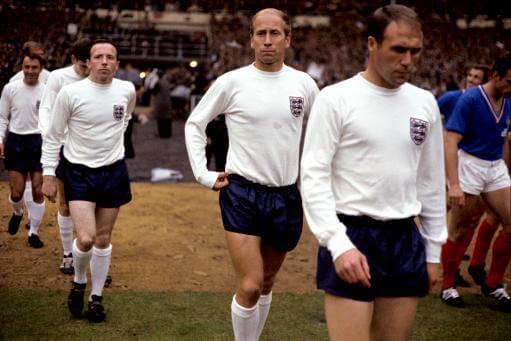 Stiles left United in 1971, going on to play for Middlesbrough and Preston before managing the Lilywhites between 1977 and 1981 ahead of a coaching career which saw him work at Canadian side Vancouver Whitecaps and then West Bromwich Albion.

He later returned to Old Trafford in 1989 when United invited him back as youth team coach, nurturing the likes of Ryan Giggs, Gary Neville, David Beckham and Nicky Butt from the academy to the first team.

But sadly, like so many of his generation, the former Manchester United midfielder, who lived close to Old Trafford until his death,  was forced to sell his medals and football memorabilia to raise money for his family in later life.

Stiles remains one of only three Englishmen, alongside Bobby Charlton and Ian Callaghan, to win both the World Cup and European Cup – guaranteeing his place in English football folklore as well as ensuring hero status in his home city of Manchester.