Can Wenger get one over old rival Mourinho for the last time?

Arsenal have always struggled against the Red Devils under Wenger, particularly away from home, and have won just 19 of 59 clashes against United. Mourinho, meanwhile, has only lost twice to Wenger in 18 meetings with Chelsea and the Red Devils.

The Portuguese, who infamously labelled Wenger a ‘voyeur’ and a ‘specialist in failure’ while in charge at Stamford Bridge, will relish the chance to get one over the 68-year-old one final time while strengthening his side’s grip on second place.

Think Arsenal can pull off a surprise win at Old Trafford? The Gunners are 6/1 to clinch victory with Fansbet.

Games between these two are never short of storylines. From Sylvain Wiltord’s winner at Old Trafford in 2002 to wrap up the title to the ‘Battle of the Buffet’ two years later as Wayne Rooney ended Arsenal’s 49-game unbeaten run, or the 8-2 thrashing in 2011, drama is guaranteed.

Our friends at Football Whispers have previewed Sunday’s match at Old Trafford to bring you all the facts, stats and information you need to know.

Mourinho finally seems to have settled on a 4-3-3 system with Ander Herrera and Paul Pogba flanking Nemanja Matic in midfield. The Special One is likely to stick with that combination with Scott McTominay and Marouane Fellaini set for substitute roles.

Captain Antonio Valencia is United’s only injury concern, the right-back picked up a calf injury in the FA Cup semi-final win over Tottenham which could mean a rare start for Juventus transfer target Matteo Darmian.

Arsenal, meanwhile, have a plethora of injury problems and Wenger’s will also have an eye on next Thursday’s Europa League semi-final second leg against Atletico Madrid. 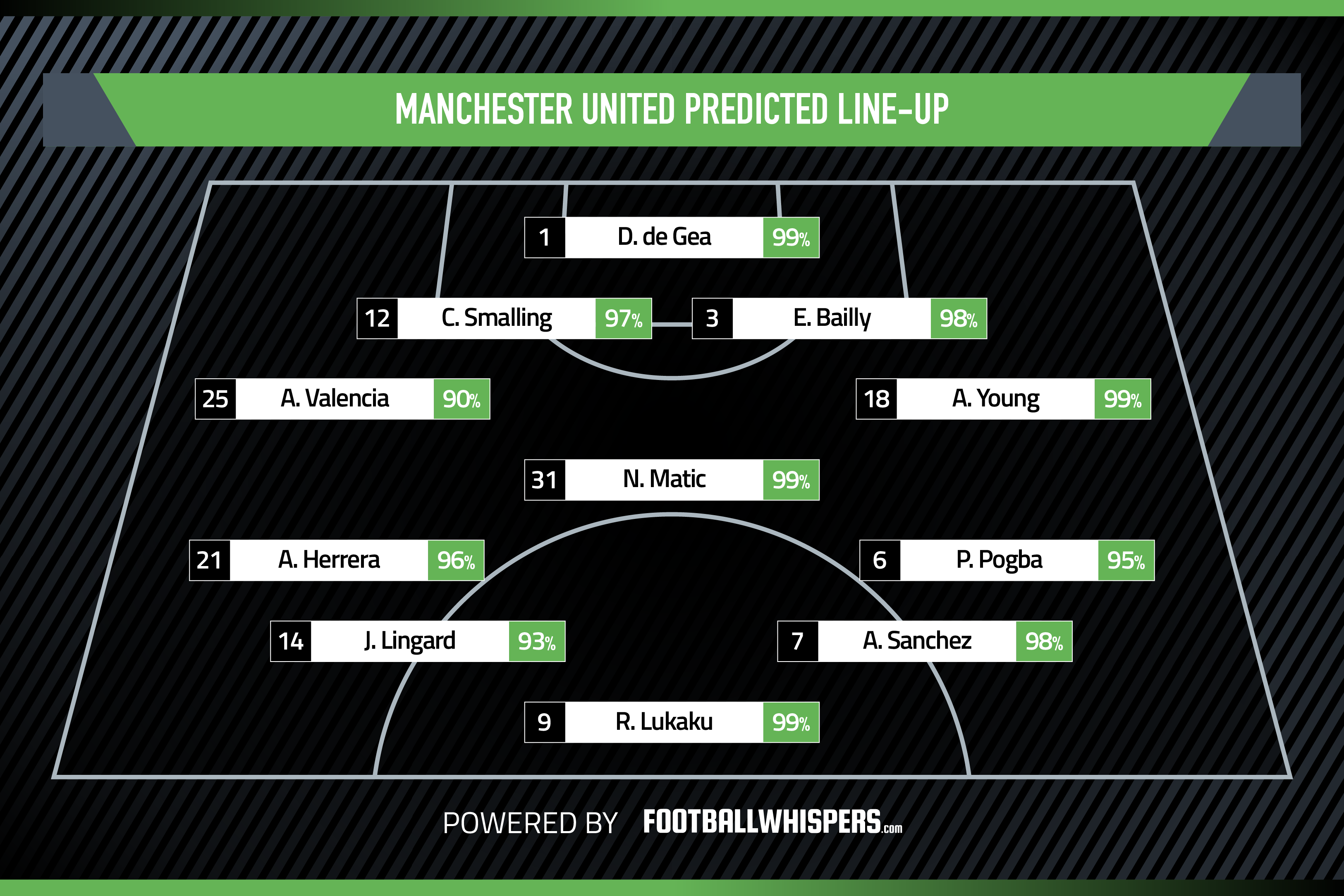 Former United winger Henrikh Mkhitaryan (MCL) has missed the last five but could return to face the side he left in January. Mohamed Elneny (ankle) and Santi Cazorla (plantaris) are out, though.

The Gunners had also settled on a 4-3-3 in recent weeks with Danny Welbeck playing on the left of a front three. However, Mesut Ozil’s return from illness in time for Thursday’s 1-1 draw with Atleti should mean Wenger uses 4-3-2-1 at Old Trafford.

Pierre-Emerick Aubameyang is ineligible for the Europa League so should take Alexandre Lacazette’s place in the starting XI to preserve the Frenchman.

These are the kind of fixtures Mourinho thrives in. The opportunity to get one over his rivals with a tactical masterclass and put Wenger in his place one final time is an opportunity the Portuguese will be desperate not to pass up.

United have tended to play in quite a rigid fashion against other top-six sides this season but given Arsenal’s fragility and the fact their focus is entirely on the Europa League Mourinho might just let the handbrake off a little on Sunday.

Matic will still patrol the middle of the park looking to halt any Arsenal attacks or pick off loose balls and Herrera will spoil at any given opportunity. But Pogba could have licence to get forward â€“ much like he did in the recent come-from-behind win over Manchester City.

Arsenal, meanwhile, will play in the same style and with the same intent as they always do, a big factor in their dire record at Old Trafford under Wenger.

The Gunners have not won a Premier League fixture at United’s home in ten attempts, last picking up three points in September 2006 when Emmanuel Adebayor struck four minutes from time. 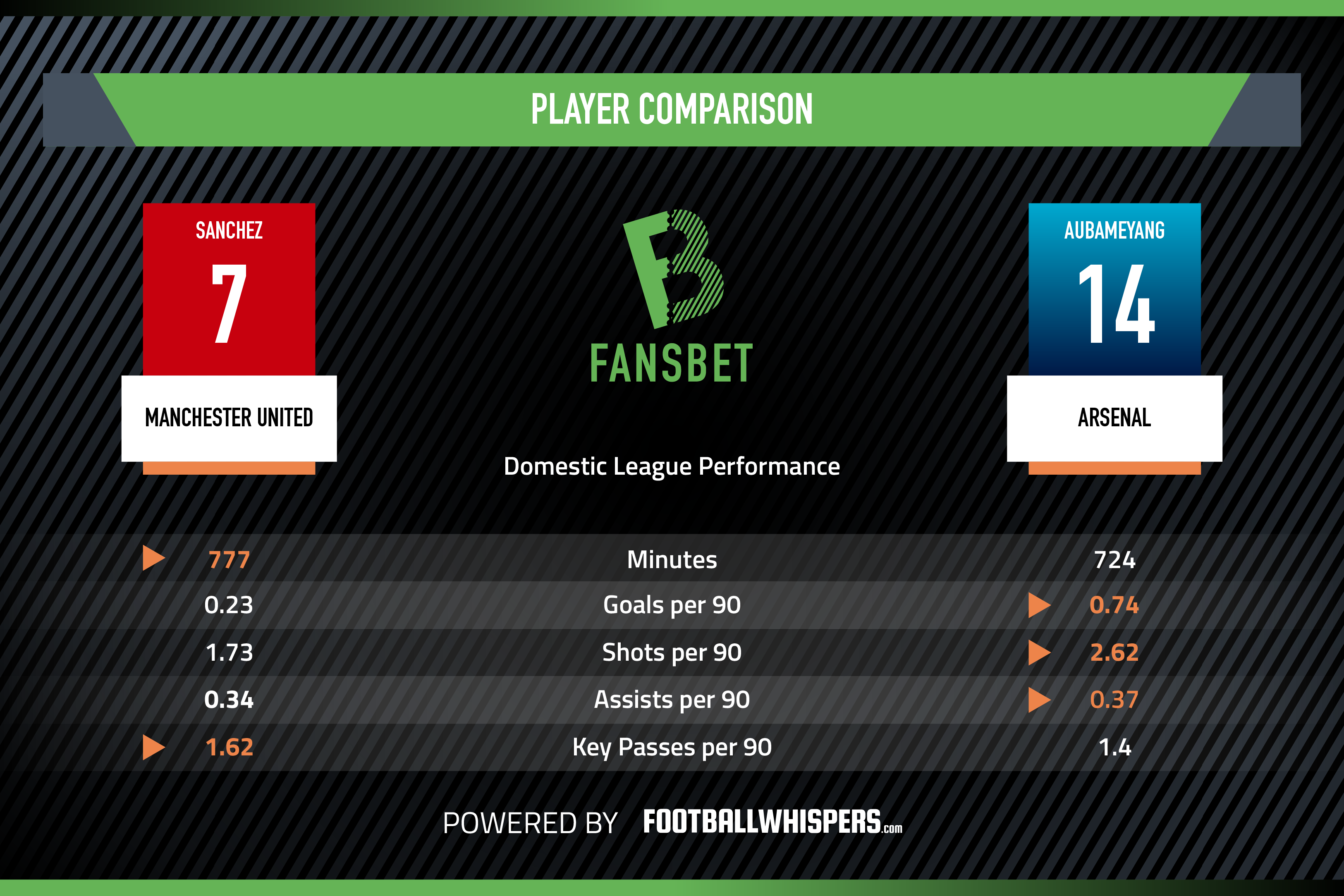 Comparisons between Sanchez and Aubameyang were inevitable ahead of this clash. When it became apparent the former would leave Arsenal in January the Gunners began negotiations to bring the Dortmund forward to the Emirates Stadium in what turned out to be a club-record move.

Shunted from one position to another, Sanchez struggled to show anything like his best form in the early weeks of his Manchester United career. Only now Mourinho has made the left-wing spot his is the Chilean hitting some kind of consistency.

His display in the FA Cup semi-final win over Tottenham â€“ scoring the first before creating the second for Herrera â€“ was the best of his fledgling United career and went a long way towards vindicating the decision to make him the Premier League’s best-paid player on£500,000 a week.

Will Sanchez get revenge against his old side? The United forward is 6/5 to score anytime with Fansbet.

Aubameyang, meanwhile, has had no such issues. The speedy Gabonese forward has been struck on his debut in a 5-1 win over Everton and has averaged 0.72 goals per 90 in the league.

Furthermore, his goal contribution of 1.12 since moving to the Premier League is the division’s third highest among forwards; only Mohamed Salah (1.35) and Sergio Aguero (1.23) fare better.

Even more impressive is the fact the former Borussia Dortmund hitman has dramatically over performed against his xG 90 of 0.4 and his xG + xA per 90 which stands at 0.56.

The Nerazzurri offered£4.6million to take him for the year with an option to complete a permanent deal for£23million this summer. Arsenal were desperate to recoup as much of the£35million they paid to sign him from Valencia as possible and pulled the plug.

And the Gunners have been left to rue that decision. The 26-year-old has been a liability, particularly in recent weeks, and his continued selection is purely down to the paucity of alternative centre-back options available to Wenger.

Lukaku, therefore, will be licking his lips at the prospect of coming up against the hapless Mustafi on Sunday. The Belgian forward’s record against fellow top-six clubs has been used as a stick to beat him with consistently. Against Arsenal he has three goals and three assists in 13 outings.

The former Everton and Chelsea striker will scarcely get a better opportunity to enhance that tally than on Sunday when a fragile Arsenal arrive at Old Trafford. The Gunners’ xGA is 37.25 yet they have shipped 46 goals in the Premier League which points to poor defending.