City Xtra: City mustn’t rest on their laurels as they face their first Premier League Test

As Manchester City prepare to face Spurs at the Etihad Stadium, Gavin Robertson from CityXtra gives us his top three games over the years from this fixture.

As Manchester City prepare for their first major test of the season as they welcome Tottenham Hotspur to the Etihad Stadium, our fan partner CityXtra give us their thoughts ahead of the game and an insight into their top three games against the opposition.

Manchester City have gotten the season off on the perfect foot in the opening weekend, but the upcoming fixture offers no time for relaxation.

The two-time defending Champions host the Champions League runners-up, who know each other all too well following last season’s late drama. Tottenham Hotspur exceeded all expectations last season, and followed it up with a very impressive summer.

Mauricio Pochettino brought his side into the spotlight since his arrival in North London, and has done incredibly well with what he has had at his disposal.

The manager has made the 4-2-3-1 his staple, and while the squad is extremely progressive and varies its shape, this is the formation he has largely perfected at the club. Spurs are a very well balanced side who pose threats all throughout the squad.

However, City have proven time and time again that if they play to their abilities they can have success in this fixture. Let’s take a look at three of the most memorable games from the recent history between the two clubs.

City have had a decent amount of success in recent history against Tottenham, but this match comes after three losses and one draw in the two years prior.

An Ilkay Gundogan goal in the 14th minute put the Blues in the lead early in what would turn out to be a very tense match. The defining moment from the game comes in a three minute spell beginning in the 68th, where Dele Alli made an awful studs up challenge on Kevin De Bruyne.

Pep Guardiola and his side led the stadium in screaming for justice to be served with a red card, but only a yellow is given by referee Craig Pawson. Two minutes later a poor Spurs throw-in is taken advantage of by City, with Gundogan pressing forward, and sliding it into De Bruyne himself to return sweet sweet revenge, hammering in a finish at the near post. 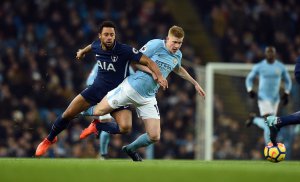 When a City fan thinks back on Jesus Navas and his time with the club, it is almost inevitable to feel a sense of disappointment over what could have been.

Expectations for the Spaniard were extremely high after a summer where City missed out on their two biggest targets in Isco and Edinson Cavani. Unfortunately, those lofty expectations were never fulfilled.

However, one moment of magic the then former, and now current, Sevilla player delivered in his time at the Etihad came 12 seconds into this match, after a poor exchange in the Spurs defense gave Aguero a shot on goal, which was parried by Hugo Lloris.

Enter Jesus Navas, who proceeded to lace a rocket up and over the recovering Lloris into the far top corner. From that point, the game seemed to already be over. Aguero went onto score twice, Alvaro Negredo got in on the party, Sadro scored an own goal, and the man of the hour Navas got his second in the last minute of the game. A fitting ending to an enjoyable day for City. 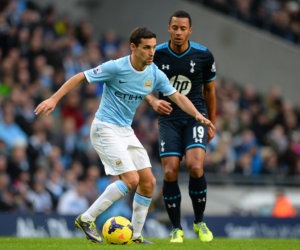 When thinking back on the history of matches between City and Spurs, it’s almost impossible for this one not to come to mind.

What looked destined to be an incredibly disappointing night for the Citizens during the first half – conceding three goals and good old Joey Barton getting sent off for dissent – turned into one of the greatest comebacks in FA Cup memory.

Sylvain Distin gives hope, scoring early in the second half, and Paul Bosvelt gets that little bit of luck you always need with a massive deflection for the second, bringing City very much back into the match with 20 minutes remaining.

Shaun Wright-Phillips scores a delightful equaliser – albeit a hint of offside – on the 80th minute mark, and Jon Macken would go on to complete the epic comeback with seconds left, latching onto a cross to put an incredible looping header into the back of the net. Truly a night to remember. 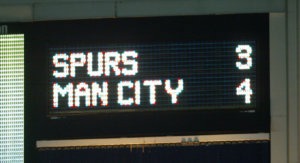