The latest retro offering from ITV revisits the epic FA Cup final of 1979, which produced one of the most thrilling finishes ever seen under the famous old Twin Towers.

Known as the “five minute final” this game took some time to come to life, but when it did it produced one of the most memorable climaxes in FA cup history.

In 1979 Wembley witnessed the most extraordinary conclusion of any Cup final, and the drama remains etched in the participants’ minds more than forty-years on.

“Everyone talks about it being a five-minute final,” Sammy McIlroy, part of the United side that day later revealed. “In those five minutes I went from such a high to probably the saddest feeling I ever felt in the game when the final whistle went.”

Arsenal looked to be cruising after goals from Brian Talbot and Frank Stapleton had given them a 2-0 lead and with just five minutes left on the clock the cup appeared to be going back to Highbury for the first time since 1971.

United had other ideas though and with time running out, Steve Coppell’s free-kick fell for Gordon McQueen who swept home for what many people believed to be purely a consolation goal for the Reds.

But just two minutes later United looked to have achieved the unthinkable as Coppell played the ball to Sammy McIlroy and the Ulsterman skipped past David O’Leary before slotting the ball past Pat Jennings in the Arsenal goal to spark incredible scenes of celebration.

“To get the equaliser was an amazing feeling, recalled United’s Sammy McIlroy some years after. “I could have played for another 90 minutes the way I felt then. I just looked around and thought, ‘We can do it now.'”

Incredibly, however, this game, which had offered so little for so long had one final twist in the tail which provided one of the most dramatic climaxes in the FA Cup’s long and illustrious history. 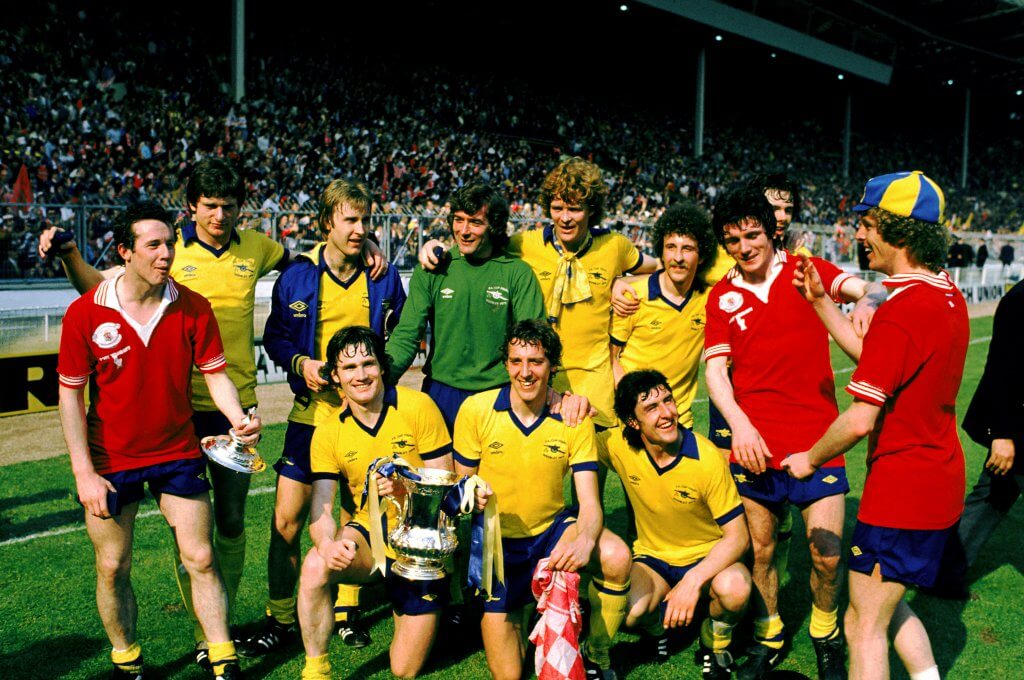 Straight from kick-off, Liam Brady forged into the United half, racing between Lou Macari and Mickey Thomas before searching-out Graham Rix on the left wing who managed to find that extra-bit of energy from somewhere to get to the line.

His first-time cross looped over the reach of United ‘keeper Gary Bailey and was met by Alan Sunderland at the far post to knock the ball over the line and win the cup for Arsenal as United players sunk to their knees.

Many Arsenal fans actually missed the goal as they had their head in their hands, while huge numbers of United followers were too busy celebrating McIlroy’s equaliser to have their eyes on the pitch and initially they wondered what the cheers from Arsenal supporters were all about.

As McIlroy sank to the turf afterwards he received consoling words from Pat Jennings, the Arsenal goalkeeper. “But no words could comfort me,” he recalls. “It was like I thought I had won the pools and then realised I hadn’t put the coupon in.”

Arsenal’s players celebrated long into the night while manager Terry Neil, so overcome by the emotion of it all, decided to take a stroll in order to gather his thoughts.

“I just wanted to go for a walk on my own,” he later said. “I went into Hyde Park and wandered about, savouring it quietly, and then went back to the party.”

As for the United dressing room Macari revealed that there were no recriminations afterwards, just silence. “For about 20 minutes I don’t think anything was said,” he said. “In 1977, after winning the Cup, I was in bed at 10 o’clock the following morning. In 1979 it was 10 o’clock that night.”

You can relive the drama of the 1979 FA Cup final between Manchester United and Arsenal all over again on ITV1 at 17:00 on Saturday, May, 9th.