Luton Town: ‘Nathan Jones will take us into the Premier League – it’s when not if’

After a monumental rise through the divisions and with the Hatters daring to dream of promotion to the Premier League, we caught up with Ian from We Are Luton Town to find out his thoughts on the club's progress.

On this weekend in 2014, Luton Town defeated Hereford United 7-0 in the Conference Premier. Meanwhile, West Bromwich Albion – Saturday’s opponent at Kenilworth Road – drew 1-1 versus Chelsea in the Premier League.

Then separated by 75 clubs in the English football pyramid, that gap has now been closed down to zero, with the Baggies sitting one place higher in the Championship as both sides eye a late surge into play-off contention.

The Hatters are an inspiration to the rest of the Football League and even further beyond; a blueprint for sides in the National League dreaming of rubbing shoulders with the EFL’s elite.

Let down, as fans feel, by the FA back in 2008-09 when they crashed out of the league, Luton were playing non-league football as recently as 2013-14 and League Two in 2017-18, but now have Premier League aspirations.

And why not? Plans for a new stadium at Power Court are ticking along nicely, while the club sit just four points below the play-offs with games in hand on three of the current four incumbents.

It’s hardly surprising, therefore, that Ian from We Are Luton Town is delighted with the season so far. 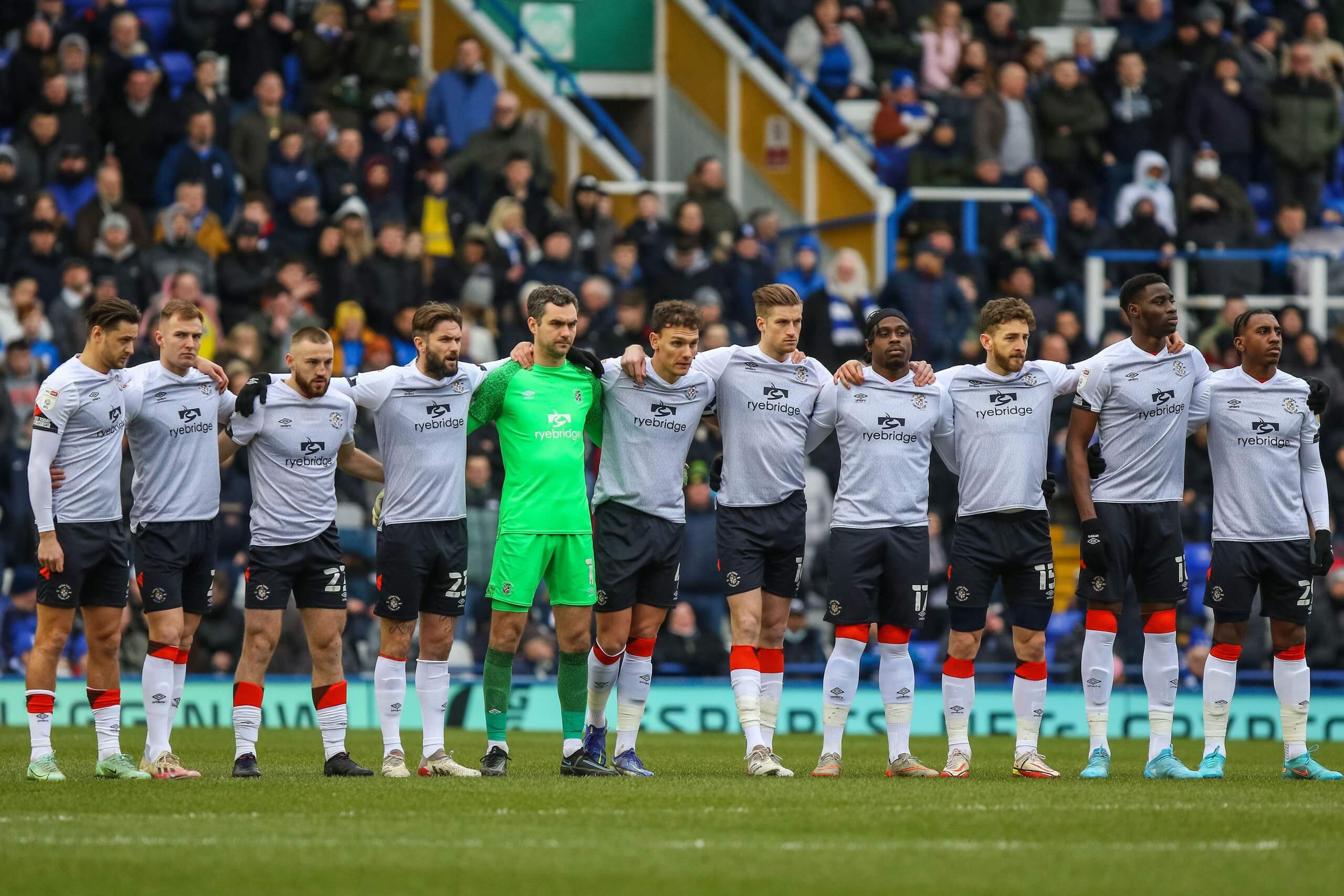 “It’s been a great start and middle; we just need to finish the season off well as we don’t want to take a slither off the gloss of the whole season.

“I’d say we are probably four or five points off where I think our points haul could have been with everything considered, mainly due to our own mistakes and lapses in concentration, which we have learnt from throughout the season.”

When we last caught up with Ian, he proclaimed 2021-22 as a season of transition and he has since seen signs of progress in very much a collective effort.

“We’ve been reliant on the whole squad throughout the season, especially in the last six or seven weeks where we’ve had such a tight schedule and they’ve all played a major part.

“We’ve got some that we brought in who are at different stages of their development and are patiently grafting away” he says, alluding partly to Carlos Mendes Gomes, poached after a stellar 2020-21 League Two season with Morecambe.

“We are patient with them because we trust the recruitment process and we’re very happy with the way that is going.” 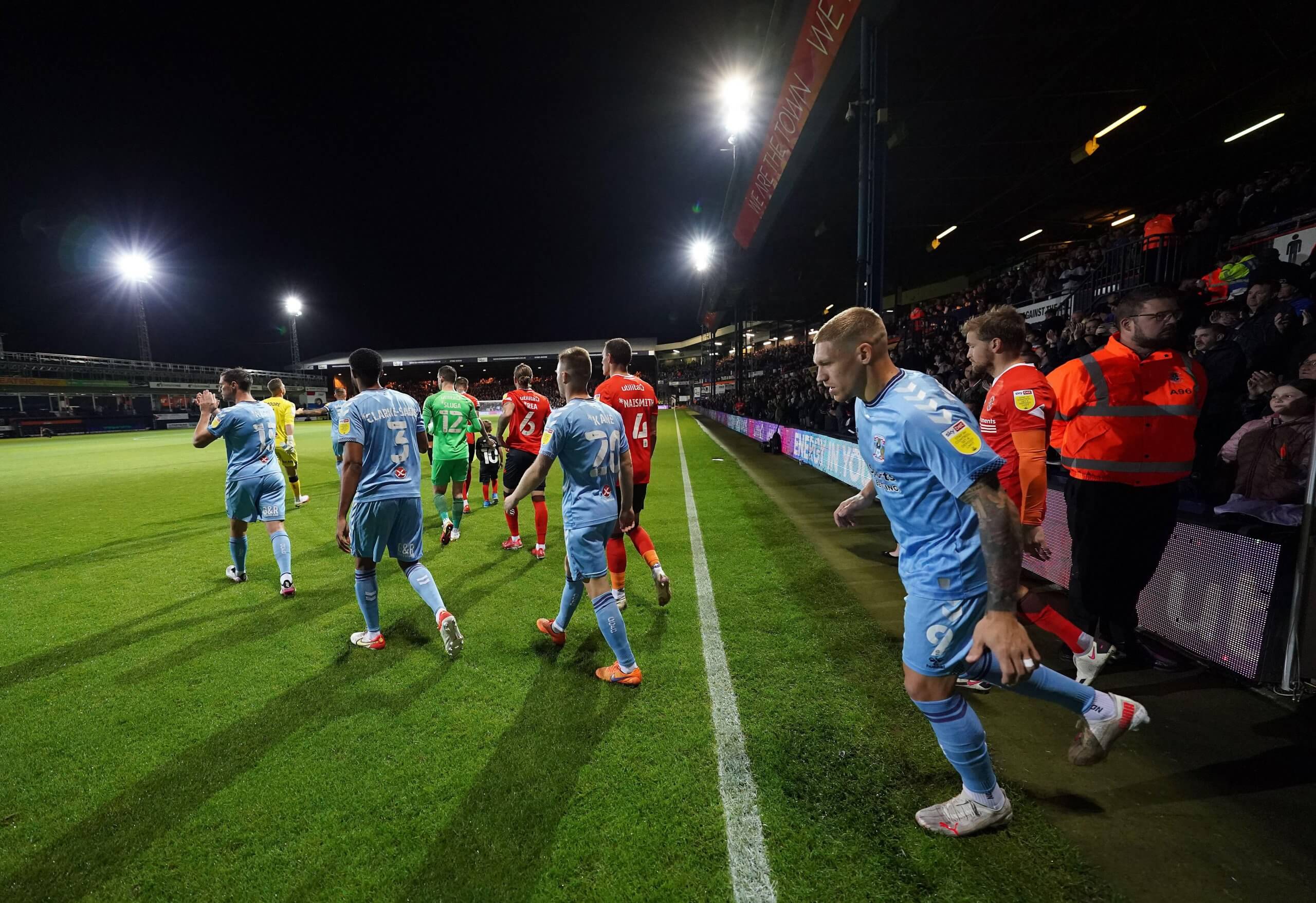 That trust is not without reason, either. Since December 3rd, only five sides have won more games than Luton, who are looking to hit their stride at an opportune moment in another tight second-tier campaign.

Then again, there is no pressure on boss Nathan Jones to deliver a top-six tilt, and if the current play-off challenge continues, it would be seen as a bonus.

“The term ‘free hit’ is overused but it’s certainly a fitting one for Luton Town and Nathan Jones this season,” Ian says.

“There won’t be many Luton fans looking over their shoulder rather than the play-offs, that’s just natural and you’re a liar if you say otherwise, but we’re realistic. The numbers off the pitch comparatively don’t add up for us to be battling at that end of the table this season.

“But it’s the numbers on the pitch that count and so far, they are giving us a fighting chance of getting into the play-offs.”

• 1 loss in 9 league games
• Unbeaten in 4
• Up to 8th in the table
• Only two sides have won more points since the start of December.

And to think this side were in League Two less than four years ago! 🤯

Luton Town are on the up… 📈#LTFC 🎩 pic.twitter.com/nYJ1ClAk4v

The speed of Luton’s resurgence owes a lot to the leadership of Chairman David Wilkinson and CEO Gary Sweet, who took over in the darkest of hours for the club.

“Our current custodians display an unwavering ability to build confidence – and confidence that has foundations.

“They have played a big part in saving us firstly and then our rise back up the leagues.

“The owner group are called LTFC 2020 and the numeric part was their plan to have us back in the Championship by that date – they beat it!

“I could wax lyrical all day about their work on and more importantly off the pitch, but they are setting a very fine example for successful, sustainable football.” 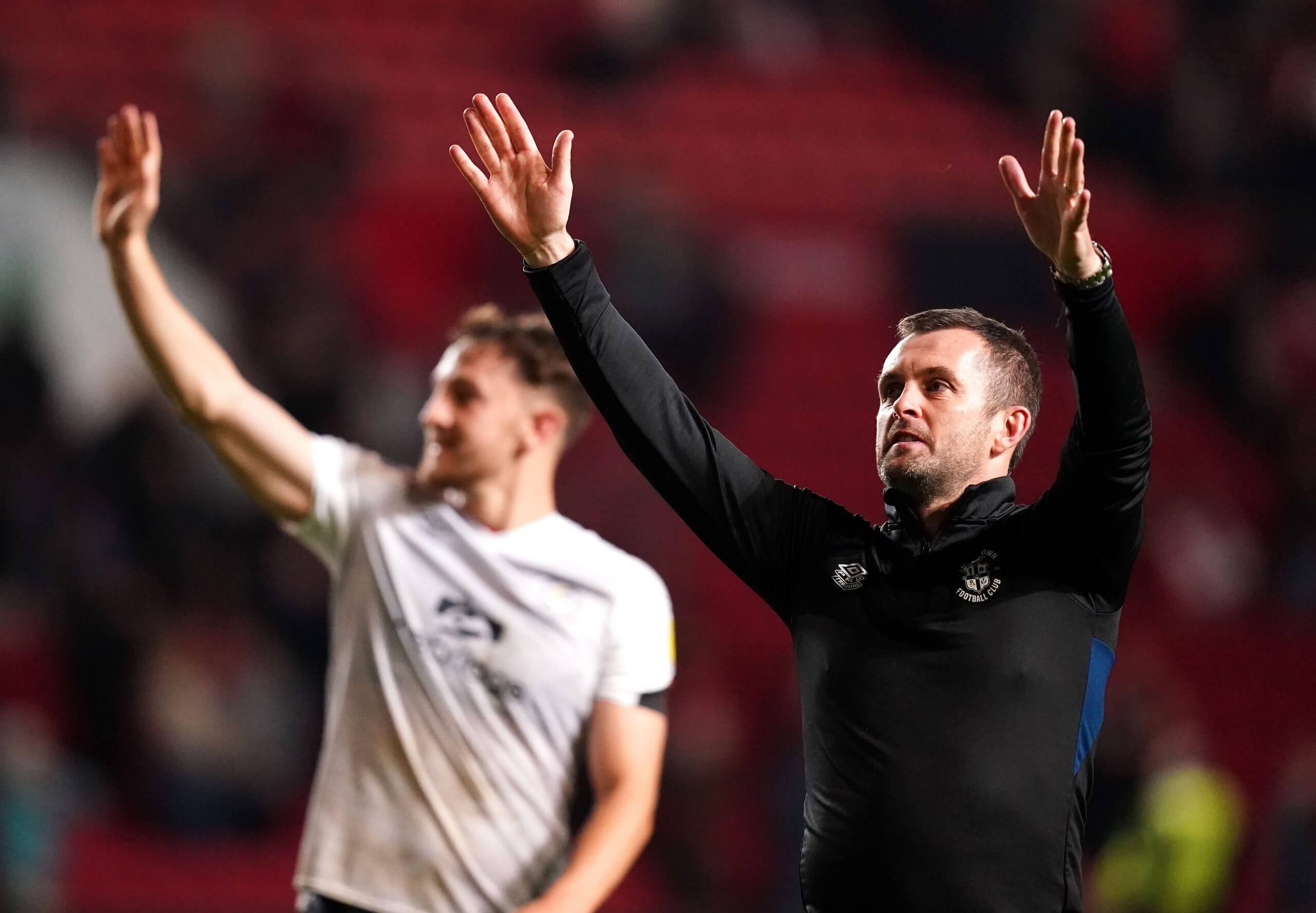 Boss Nathan Jones, who helped build Luton’s promotion push from League One in his first spell at the club before consolidating the Hatters’ Championship status upon his return after a brief stint at Stoke City, takes plenty of credit in Ian’s eyes.

However, Ian also notes that the club’s monumental rise through the divisions can be accredited to the Welshman’s predecessor and temporary successor, also.

“Let’s be level headed about it, he is a fantastic manager for us and is a perfect fit.

“But the foundations, which were significantly harder to lay, can’t be taken away from John Still.

“We were broken on and off the pitch before he turned up, it was a toxic and sour atmosphere after dropping down the divisions and into non-league so unjustly.

“He was a turning point; he understood a football club was more than just the eleven on the pitch and to turn a corner we needed unity. We’ll never forget him for that, and he will be written into the history books in bold font for sure. 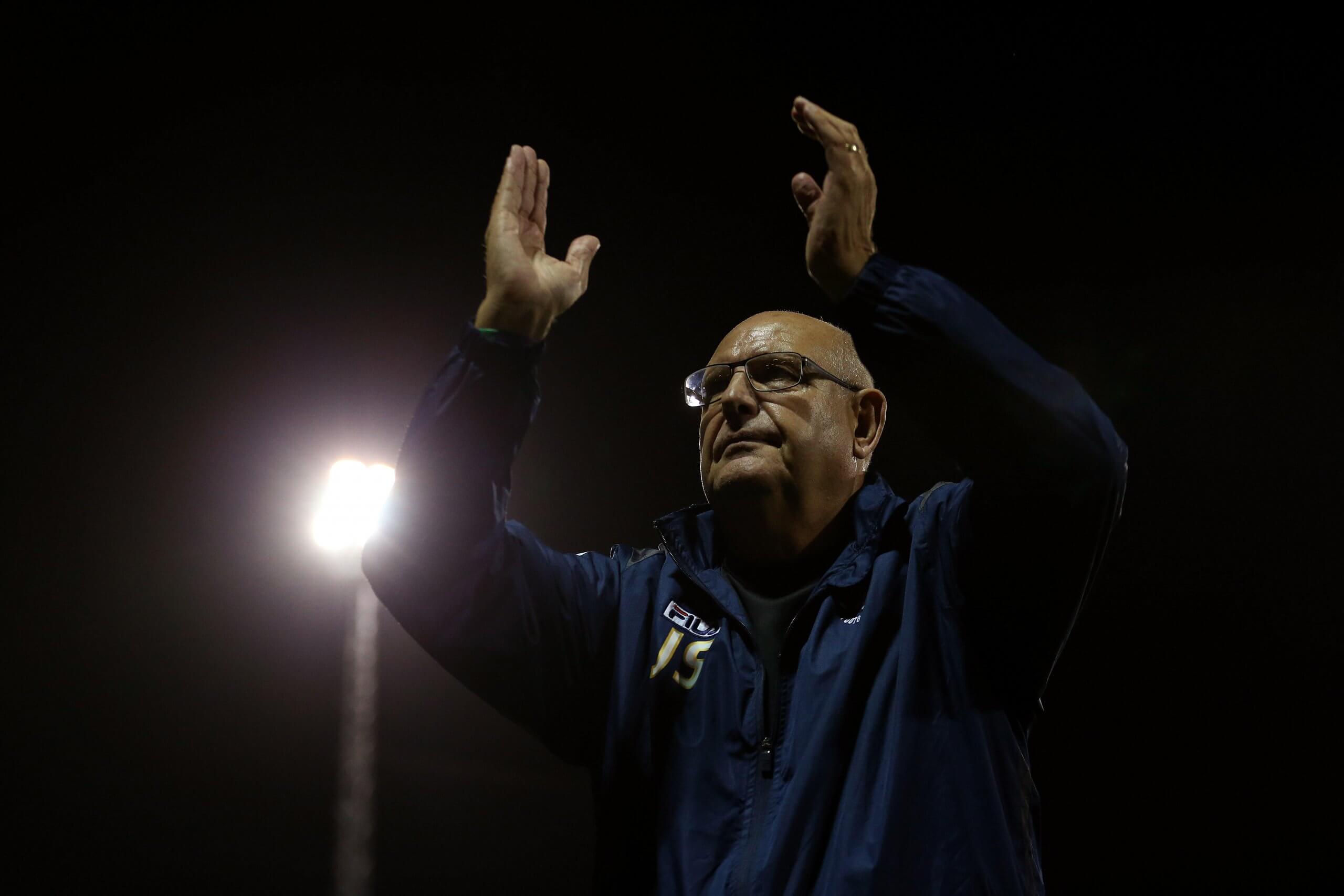 “Then of course Mick Harford has furthered his legend status by taking the baton when Nathan Jones left for Stoke and he then steered us to a League One title.

“That season could have quite easily gone south; the only man for the job that season was Mick Harford and aside from that, his constant work in recruitment has produced spectacular results.

“That said, Nathan Jones has had a big part to play too, without him I’m not sure we would be where we are today. He’s as near to a perfect fit as I think you’ll get for a Luton Town manager.”

Asked if he stands by his statement that the fiery Welshman will take Luton to the Premier League, Ian remains convinced.

“I wholeheartedly stand by my statement. He’ll take us to the Premier League alright – it’s more of a when not an if.”