Matthew Crist looks back at one of the most enthralling games ever between Liverpool and Manchester United at Anfield.

On a sunny April afternoon in 1988 Manchester United made their way to Anfield to take on a high-flying Liverpool side for what some now call, England’s biggest footballing rivalry.

To make things more interesting, first were playing second in the top flight of English football – something of a rarity when these two huge rivals have met down the years since.

While Liverpool were still sitting firmly on their “perch,” United were coming to terms with life under new manager Alex Ferguson, who had come south from Aberdeen the previous November looking to secure the club’s first title since 1967.

The previous season Ferguson had taken all three points from his first visit to Anfield thanks to a late Norman Whiteside strike, so with his United side playing well confidence was high – despite Liverpool holding an 11 point advantage in the table.

And things got off to a flying start for the Reds (playing in white) as Bryan Robson swept home a Peter Davenport cross from six yards out after just three minutes. 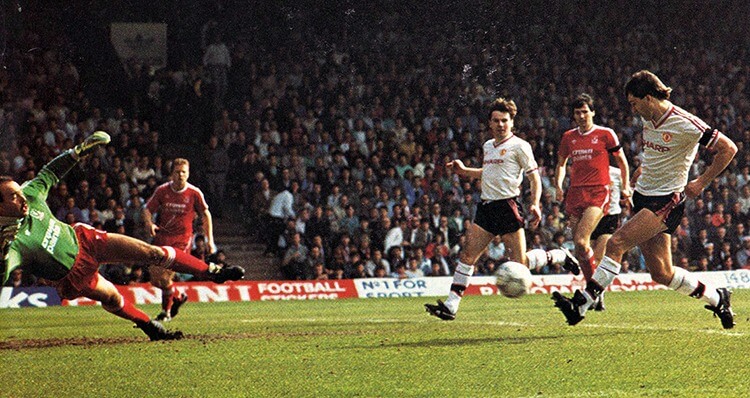 Liverpool had only lost twice all season and were still unbeaten at home, but that didn’t stop United supporters in the Anfield Road end contemplating a huge victory that would have put the cat amongst the pigeons as far as the title race was concerned.

However, as was so often the case with Liverpool in those days, they were at their most dangerous when they were behind and responded like a wounded animal.

Two quick goals from Beardsley and Gillespie just before half time put them into the lead and when Steve McMahon’s rasping shot flew past Chris Turner not long after the break to make it 3-1 there only looked to be one winner.

Initially, the response of United players was to kick lumps out of their opponents and hope for the best as their frustration began to get the better of them.

Norman Whiteside, in particular, took it upon himself to dish out the punishment with Steve McMahon being his intended target, prompting the hard-tackling England midfielder to apparently tell a friend that Whiteside was, “the only player that ever frightened him.”

And just when it all appeared to be getting too much for United, Colin Gibson was given his marching orders for cynically tripping that man McMahon again as he was forging yet another assault on United’s goal.

Despite McMahon’s sporting protestations on behalf of his opposite number in a display that was typical of a time when hard men dished it out but could also take it, United were down to ten and in real danger of losing their heads in a bear pit of an atmosphere.

But as they rode the storm it was United that began to play with a little more belief and confidence and despite having a relatively poor game by his standards, as well as being responsible for at least one of Liverpool’s goals, Bryan Robson was the catalyst for the most unlikely of recoveries. 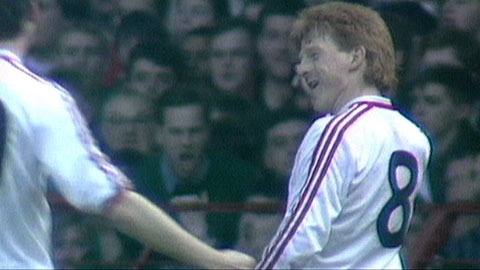 His speculative effort from 20 yards, after some good work from substitute Jesper Olsen, took a wicked deflection and Grobbelaar was helpless – suddenly the comeback was on.

And as Liverpool continued to press forward looking to finish the game off once and for all United seized their opportunity.

In an era when celebrations were often just a pure release of emotion and joy with little pre-planned choreography, Strachan’s response to his goal would be almost as memorable as the entire game itself.

Jogging over to a seething Kop, he paused for a second as if to milk the moment and then smoked an imaginary cigar (with two fingers of course) as bile, hatred and who knows what else rained down in his general direction.

The result felt like a victory for United, but off the pitch their new manager, in his first full season in charge, continued to bemoan his team’s luck – telling reporters that visiting managers have to: “Leave here choking on their own vomit, biting their tongue, afraid to tell the truth’.

Meanwhile, Kenny Dalglish, who was passing through the tunnel area with his infant daughter in his arms couldn’t resist the opportunity of a dig himself. “You’ll get more sense out of her,” he quipped to the assembled press.

In truth it never really looked like Liverpool would relinquish the grip they had on the title that year, going on to win the league by nine points.

But bizarrely, despite the years of success enjoyed on Merseyside and the glory that was to follow under Ferguson at the other end of the M62, this was one of the few top-of-the-table clashes between these two most bitter of rivals in almost 130 years.

In fact, the 1987-88 season was one of only five occasions in league history that the clubs have finished first and second come May. 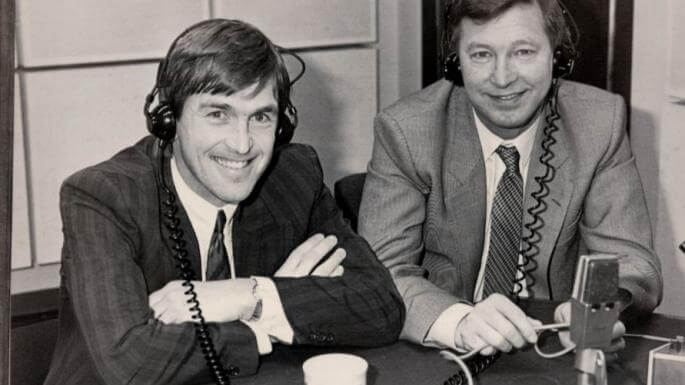