John Deer Classic: Young guns can go for it in Illinois

With Matthew Wollf winning the 3M Open in just his 3rd professional start David Kristiansen casts his eye over a number of the young hopefuls heading to the John Deer Classic this weekend.

The young guns have arrived! Matthew Wollf wins in just his 3rdprofessional start after an incredible hole out from just off the green for an eagle on 18thon Sunday.

The 20-year-old becomes the 7thplayer to win on the PGA Tour in modern times before turning 21. The other six? Oh, just Woods, Ballesteros, Mickelson, Floyd, McIlroy and Spieth. All with at least three majors to their name.

Collin Morikawa also all but secured his Tour card for next season with a T2 and Viktor Hovland continued his solid start as a pro with a T13.

As last year Bryson Dechambeu seems to be turning in to form before the last major and the FedEx Cup playoffs. Keep an eye on the eccentric American in the coming weeks, because as we have seen when he gets hot, he stays hot. 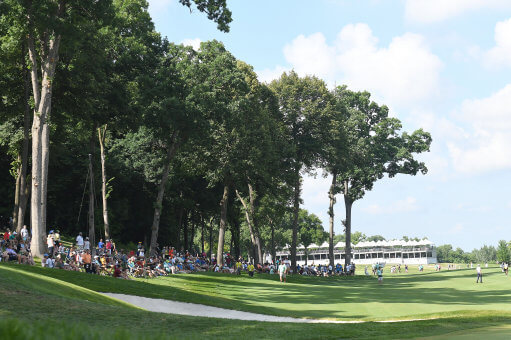 As expected, the week before a major on a different continent the field isn’t the strongest with the three rookies Morikawa, Hovland and Wollf being the favourites. It is the weakest non opposite field event this year with number 56 in the world Kyle Stanley being the highest ranked player in the field.

With past winners at TPC Deere Run including Jordan Spieth (2x), Zach Johnson and Steve Stricker (3x) its clear what’s important here and its wedge play and a hot putter. Both the fairways and greens are some of the easiest to hit on tour, with an over 70% success rate in both categories.

All three of the par 5s are reachable by most in the field. Seven of the ten par 4s clocks in at between 350-450 yards which as mentioned leads to a lot of wedges and short irons into some greens right around tour average in size. Even the par 3s are pretty straight forward with only one of the four playing over par. The winning score usually is around -20.

I’m going back to the young phenom after a T13 last week where he ones again was lights out with his irons but got let down by his around the green game for the third straight week.

This course might be the one on tour where the around the green game is least important with players averaging over 70% greens in regulation. His stats are out of this world, leading the field in opportunities gained, 4thon approach, 7thin fairways gained and in the top 20 in both par 5 scoring and birdies.

You could argue the number is a tad low, but the win is coming for the Norwegian and without any top 50 players in the field this could very well be the spot.

Dahmen is a hit or miss player when it comes to his irons over his last six starts he has only gained strokes with his irons on three occasions, but when he is in the positive he’s really in the green gaining an average of almost five strokes on the field.

He is in a good spell with his putter gaining strokes in six of his last eight starts. He is in the top twenty in both birdies and fairways gained. He showed that he can perform at this track with his runner up finish last year.

The 25-year-old rookie is right on the line in terms of keeping his card for next year, so he needs a couple of good finishes to end the season to avoid having to take the trip back down to the Korn Ferry Tour.

Lebioda is turning into good form over the past couple of months ranking in the top 20 in the field in approach, par 5 scoring and birdies gained. Add to that his putter has started firing gaining strokes in three of his last four starts and I’m happy backing him at this number.