With the season all but over, Celtic are already planning their summer business. This year, the Hoops once again proved too hot for the rest of the Scottish Premiership, cantering to their seventh successive title by the tidy margin of nine points.

Brendan Rodgers’ side may have been head and shoulders above the rest over the course of 38 games, but it’s interesting that a team perceived to be comfortably superior didn’t actually boast the most prolific strike-force.

Instead, Rangers â€“ who ended up 12 points behind their Old Firm rivals â€“ were the league’s highest-scorers, their haul of 76 edging Celtic’s 73.

With that, Rodgers is keen to bolster his attacking options and is reportedly targeting a move for Hull City striker Abel Hernandez.

Our friends at Football Whispers have taken a look at what the forward could offer Celtic and why Rodgers is determined to edge out Hernandez’s other potential suitors.

Why do Celtic want Hernandez?

Goals, to put it bluntly. Celtic may have retained their title but they weren’t quite the unstoppable winning machine that won 34 of 38 matches during the 2016/17 season.

Also, the fact that Celtic scored 33 fewer goals this season will not have gone unnoticed by Rodgers and the club’s recruitment team. In the 2016/17 campaign, Moussa Dembele and Scott Sinclair scored 57 goals between them. This season, however, the duo have managed just 34.

With Rodgers keen to restore the champions’ cutting edge after Dembele’s struggles this season, it’s not overly surprising to see Hernandez emerge as a Celtic transfer target.

The Uruguay international is one of the Championship’s most accomplished finishers and in recent weeks has been splashed across the back pages with reports claiming he is a Nottingham Forest, Wolverhampton Wanderers and Newcastle United transfer target with his Hull contract expiring this summer.

Rodgers is aware that, despite Dembele’s leaner season, interest in the young Frenchman remains strong. The club rejected a bid from Brighton for the 21-year-old in January and are braced for further speculation surrounding his future at Celtic Park.

Considering the possibility of such developments, it’s understandable that Rodgers would be weighing up a possible move for a direct replacement. 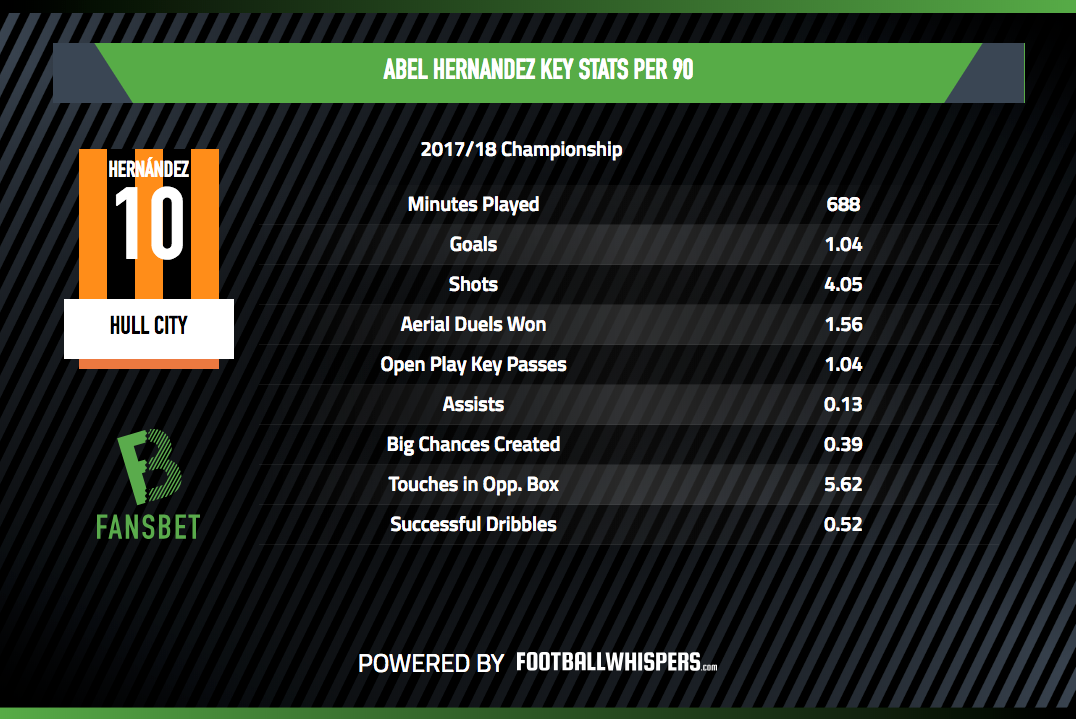 What are Hernandez’s strengths?

Hull finished 18th in the Championship this season after a difficult campaign following their relegation from the Premier League. Leonid Slutsky was appointed head coach in the summer but was sacked before Christmas and, while Nigel Adkins steadied the ship enough to avoid back-to-back relegations, it’s been difficult for Hernandez to shine for the strugglers.

Of course, the South American missed the entire first half of the campaign after rupturing his Achilles tendon in August.

After seven months on the treatment table, he returned against Millwall in March and immediately reminded the Tigers’ fans what they had been missing: pace, intelligent movement and clinical finishing.

Introduced as a 59th-minute substitute, Hernandez duly proceeded to score 20 minutes after coming on after restoring Hull’s killer instinct in the final third. The former Palermo frontman scored another four goals during Hull’s run-in to end the season on eight strikes from ten appearances.

When Hull got promoted to the Premier League at the end of the 2015/16 season, Hernandez was the club’s top scorer with 22 in 45 games. An average of pretty much a goal every two games, it’s clear Hernandez is a proficient forward capable of leading Celtic’s forward line.

What are Hernandez’s weaknesses?

While it’s debatable that it can be called a weakness, Hernandez has had substantial struggles with injury. He has only managed more than 30 appearances once during his four years at the KC Stadium â€“ and it was a similar story at Palermo.

In addition, Hernandez has the tendency to blow hot and cold. For example, when the Tigers were promoted in 2015/16 he endured two droughts, one of six games and one lasting a worrying nine.

When Hernandez’s confidence is low, he can, like many strikers, go missing. According to Football Whispers’ Player Persona chart, below, chance creation is not a big part of his game and that is reflected in his return of 1.04 open-play key passes and 0.39 big chances per 90. 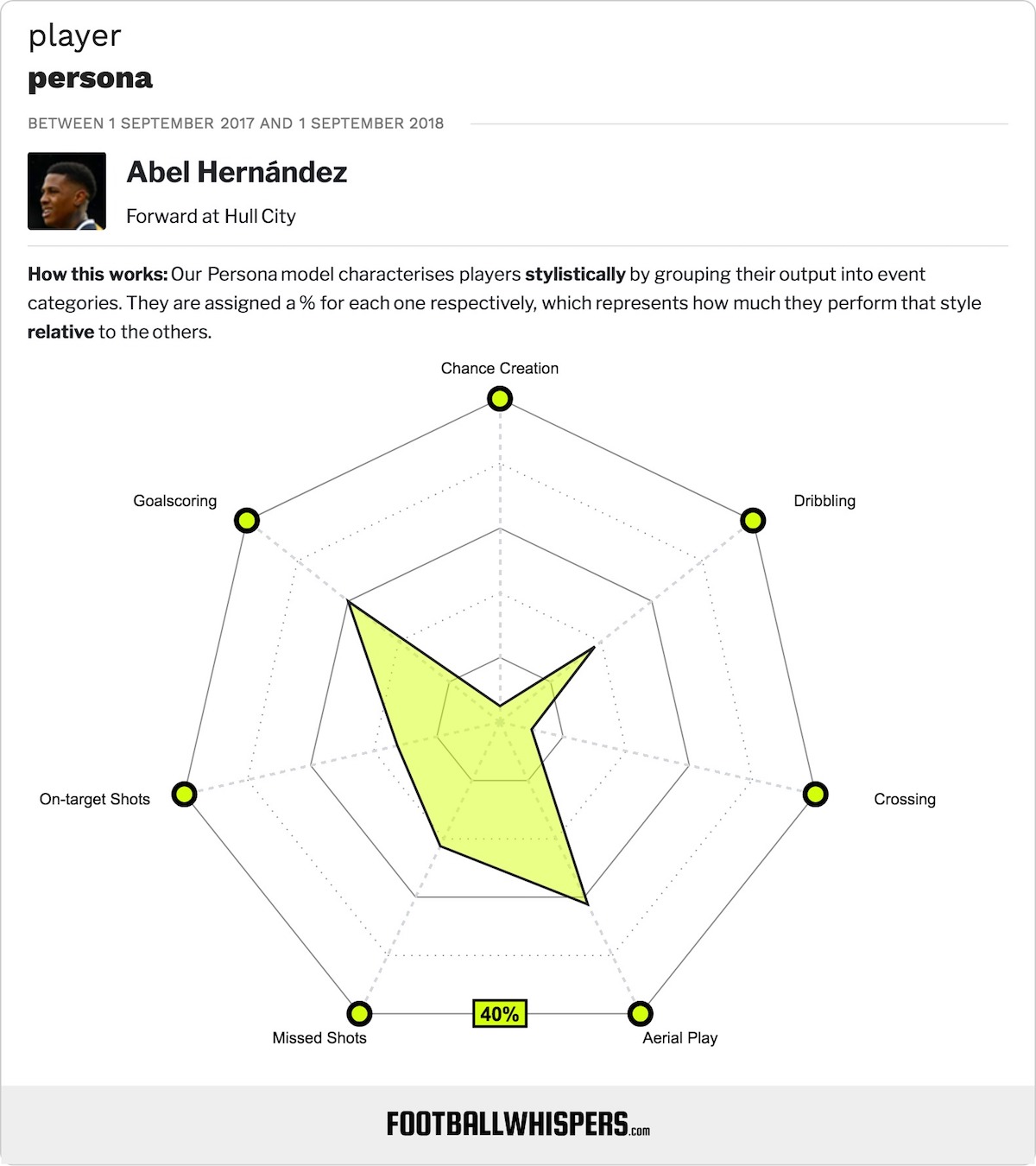 But Rodgers is an exceptional man-motivator and one-to-one coach. If anyone can get the best out of Hernandez and improve him as an all-round player it’s the Bhoys coach.