Heysel Remembered: Terror and tragedy on the terraces

On May 29th, 1985, 39 people died and 600 were injured during violent clashes at the European Cup final between Liverpool and Juventus.

The month of May was already one of the bleakest in the history of English football and it was about to get worse as violent scenes at the European Cup final in Brussels led to the death of 39 people as millions watched in horror live on television.

Just weeks after 56 people had been killed at Valley Parade on May 11th, the same day that 15-year old Ian Hambridge died as a result of fighting between Leeds United and Birmingham City fans at St Andrews,  the game experienced yet more tragedy as Liverpool and Juventus fans clashed at the Heysel Stadium ahead of the European Cup final.

With English champions and European Cup holders Liverpool facing Italian giants Juventus in the early summer sunshine, it should have been an unforgettable encounter, but sadly, the only thing that night will be remembered for is the tragic scenes which took place prior to the game.

Tensions had been high going into the match, with many Liverpool fans claiming they had been subject to brutal beatings at the hands of Italian fans and police at the previous season’s final 12-months before in Rome.

As a result, the two sets of rival supporters were divided into three sections, with fans at opposite ends of the ground behind each goal as well as a neutral area, next to the Liverpool fans known as Z Block, which had been set aside for Belgian residents.

However, as the stadium began to fill up, it became clear that the neutral area had become another Juventus section with the two sets of fans soon starting to exchange hostilities, first with words, and then with objects which rained down from the skies. 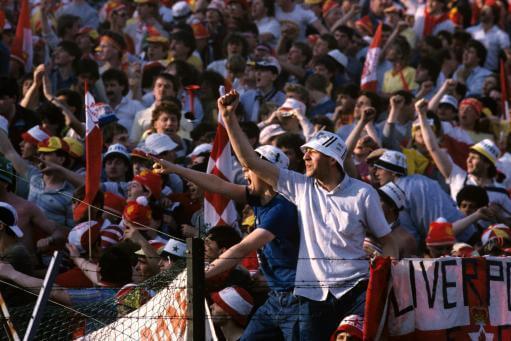 To make matters worse, the 60,000-seater stadium, which had been built in the 1930s, had fallen into a state of disrepair and desperately needed a revamp meaning that lumps of brick and concrete were readily available for anyone wishing to use them as missiles.

Then, about an hour before kick-off, a group of Liverpool fans crossed the area separating them from a neutral zone and charged their counterparts on the other side of the divide in a scene sadly typical of football in the mid-1980s.

But as the Juventus fans fled towards the corner of the ground as they attempted to escape, they were confronted by a 9-foot wall, and with the speed and power of the surge, a terrible and deadly crush soon ensued.

“There was an empty sector next to ours that acted as a buffer to the Liverpool fans,” Juventus fan Otello Lorentini, who was in the neutral area, later explained. “I was relaxing, reading a newspaper, when I saw a single English hooligan, he jumped over a small fence and came charging towards us.”

Due to the sheer weight and pressure applied to the concrete structure, the wall eventually collapsed with fans falling on top of each other like a pack of cards with those at the bottom standing no chance – among those killed were 32 Italians, four Belgians, two French fans and one from Northern Ireland.

Sadly, Lorentini’s 30-year-old son Roberto was killed in the crush: “He was a doctor and although he could have escaped when the violence began he wanted to stay and help people. I deluded myself that I could hear his pulse. But no, he was dead.” 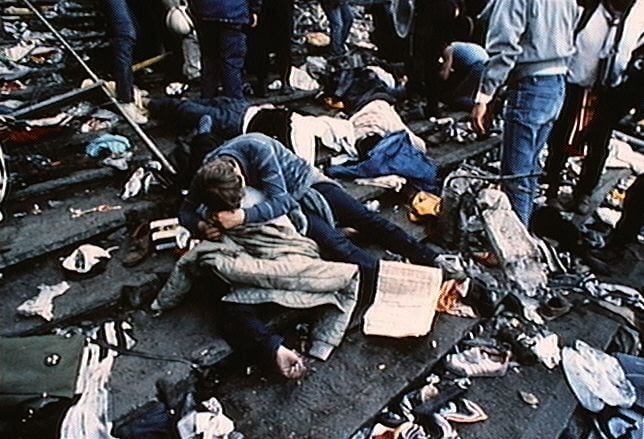 Liverpool fan Dave Thomas was also there that night and later explained what he saw: “The scene was horrific, there were people laid out all over the ground, many with discoloured, blue faces.”

All the while the BBC, who were covering the game that night live, continued to broadcast with Barry Davies becoming more of a war correspondent than a football commentator.

“I’ve never got over what happened,” explained Eamonn McCabe, who was working as a photographer at the Heysel Stadium that night. “It was awful. I wish I had never been involved in it. I’d never seen people dying in front of me before.”

To the dismay of many the game went ahead with bodies still being laid out in temporary mortuaries in the car parks around the ground with Juventus eventually winning the final 1-0 courtesy of a somewhat dubious Michel Platini penalty.

“The players did not want to play,” claimed Juventus star Zbigniew Boniek. “The authorities ordered us to. They believed it would prevent a war between the fans.”

Juventus striker Paolo Rossi agreed, saying: “I don’t feel as if I won the European Cup, not that night against Liverpool,” 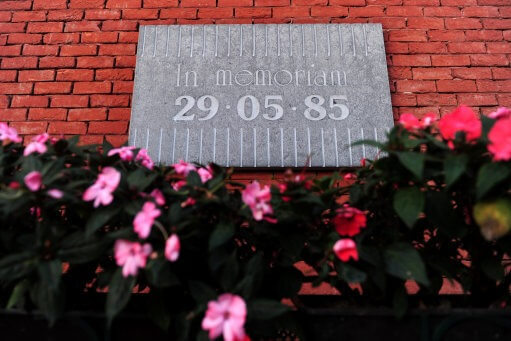 After Belgian police pored over television footage, 34 arrests were made and 26 Liverpool fans were charged with manslaughter with 14 being found guilty of involuntary manslaughter. Seven were given three year prison terms and the other seven suspended three-year sentences.

A further 10 Reds supporters were found not guilty, two Belgian officials were found guilty of criminal negligence while UEFA was cleared – much to the anger of the grieving families.

“Let me say this,” Zbigniew Boniek proclaimed after that dreadful night. “If people go to watch the final of the European Cup it is absolutely ridiculous that they will never return home because they have been killed,”