Means no longer justifying the ends for all

Almost twelve months ago Manchester United faced Celta Vigo at Old Trafford in the second leg of the Europa League semi-final, holding a 1-0 lead from the first match in Spain. Relatively early in the game they scored a second, through Marouane Fellaini, to take a commanding two goal advantage in the tie. The opportunity was there, against a mid-table La Liga side, to finish them off. Instead United, clearly on Jose Mourinho’s instruction, just stopped playing, dropped back to the edge of their own eighteen yard box, and invited pressure. Waves and waves of it. Celta equalised and then, with the last kick of the game, John Guidetti miscued when faced with an open goal when a clean finish would have put the home side out. From a commanding position United’s approach to the game was cowardly, an anathema to everything the club stands for, and almost terminal for their European campaign and hopes of a Champions League place the following year. In the knockout rounds of the competition, Mourinho’s team faced Celta, St Etienne, the seventh best team in Russia Rostov and Anderlecht. Only one of those ties was won by more than a goal over 180 minutes against the most average set of opponents. In the final Ajax were beaten, the trophy and a place at the continent’s top table secured, and the manager could reasonably argue that the end justified the means.

Fast forward to Tuesday night’s humbling by Sevilla, knocking United out of the competition that had been the ultimate end point for that long Europa League campaign and conservative football. Finally back in the knockout rounds of the Champions League, the supposed Holy Grail, and against a decidedly average side, Mourinho set out his team in both legs primarily to defend. There was no attacking plan to speak of, no tempo, no balance to the lineup, no direction whatsoever, bar the need to defend compactly. United regularly set up like this. It against everything the club stands for, a coward’s approach, with as little risk as possible and is soul destroying to watch. In choosing Marouane Fellaini in midfield to partner Nemanja Matic, the Portuguese created an engine of the team without the mobility to dominate the centre of the pitch or the ability on the ball to create. Further forward Marcus Rashford, so dangerous against Liverpool from the left hand side the previous Saturday, was moved to the right to accommodate the painfully out of form Alexis Sanchez. It was amateur hour from start to finish, a no risk, reactive setup and it got what it deserved – nothing. Over 180 minutes United had barely even attempted to win the tie and managed only four shots in target. One would think they were facing Barcelona. The second leg was the worst home knockout European performance this middle aged fan can recall from United, an embarrassment to the club. You can get away with playing that way if success follows. That is why Mourinho was employed, to win ties like this, but the end was failure, the means unjustifiable.

Post-match Mourinho further antagonised a sizeable proportion of the club’s fan base who have slowly grown weary of the turgid, safety first football, with a nonsensical press conference in which he argued black was white and implied that football teams lose matches, so losing this one was fine. This one being the very reason he was brought to the club in the first place:

He went on to claim that he didn’t think â€œthe performance was badâ€ and dismissed the four shots on target criticism as deceptive statistics.

Mourinho is a marmite figure for United fans. Many still support him and cite an improved Premier League showing, while many others have grown tired of his tedious, largely joyless brand of football. Into the opening months of the season supporters were still singing their song suggesting that Jose had the team playing â€œthe way they shouldâ€. It is rare indeed to hear it now and there is an argument to suggest that it was never appropriate. More common is the familiar refrain of â€œattack, attack, attack, attack, attackâ€, a plea for a negative approach to be replaced by some risk taking going forward. At Crystal Palace the message was heeded and United and Mourinho turned a wretched 2-0 deficit into a 3-2 win, but such responses have been rare and the comeback only served to highlight the pathetic tactical setup and team cohesion that characterised the first hour of that game at Selhurst Park. Indeed, on the United podcast I co-host I last night questioned how many stellar first half performances Mourinho has masterminded in his near two years at the club. We could only think of a handful at best. The manager appears consistently unable to set the team up and sufficiently motivate it to excel from the start in games. It’s hard to point to a ninety minute example of excellence this season. The team may be winning more games than last year, but they are doing so in the most putrid fashion possible.

Post match this fan, and many others on my Twitter timeline, opined that whilst Mourinho should not be sacked (and will not be sacked), he would not be missed were he to walk away tomorrow. Negative, reactionary football can be tolerated if goals are met, but they haven’t been. United are hard to watch, as hard now as they ever were under Louis Van Gaal. The return to the Champions League was highlighted as the ultimate aim for last season, but having got there the entire European campaign has been a wretched dirge. With the exception of an impressive 4-1 win in Moscow against CSKA, there has been little excitement, just a sea of grind and mediocrity, which raises the question of what are we tolerating this for? Mourinho’s appeal is his ability to win ties like this, but without that what does he offer that others couldn’t in a more positive way? 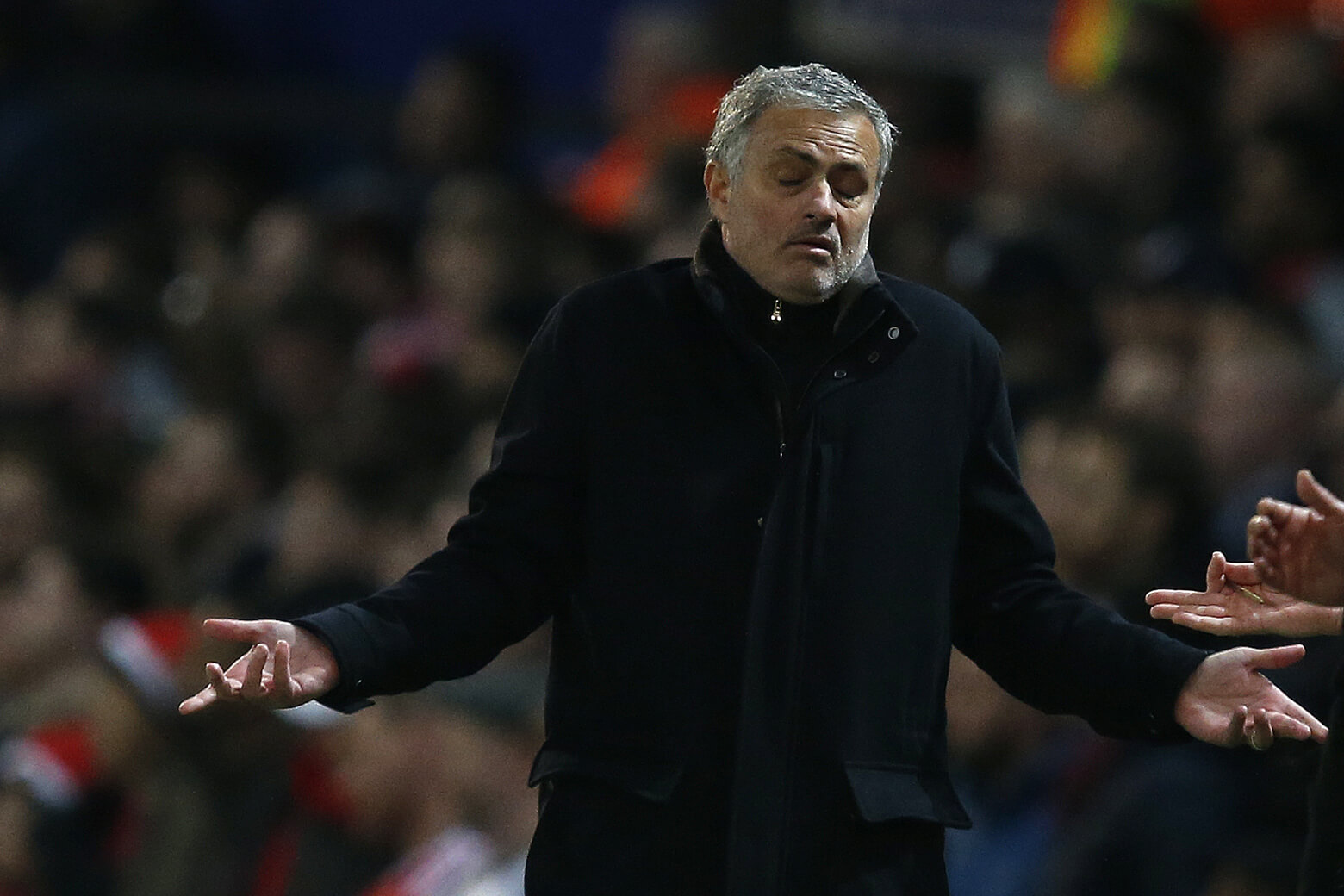 I wrote prior to the Liverpool game that Mourinho’s moments of tactical genius, that have carried him to so much success, have become few and far between. The intelligent first half against Liverpool was the exception that proved the rule. That David De Gea is likely to be named player of the year again is a damning indictment of the functioning of the team, even one that sits second in the Premier League. Mourinho’s battles with pundits, other managers and some of his own players are tiresome. That City are going to win the title this season by a mile, likely clinched at home against United, playing glorious football further highlights the futility of the Portuguese’s approach, regardless of the fact that there is some truth in his claims that Guardiola has had more money and freedom in the transfer market. Mourinho has himself spent hundreds of millions of pounds strengthening the squad and yet the football is less cohesive than ever.

The club’s support is divided and many are still firmly in their manager’s corner, but an increasing number are wondering if he is no longer the genius he once was and questioning whether he’s worth the hassle and dreadful spectacle. This writer believes that whenever Mourinho leaves he will gift a stronger squad to his successor than he himself inherited, but it is difficult to imagine him overhauling Guardiola in the Premier League or achieving success in the Champions League using the tactical framework that he currently employs. He will justifiably get a third year (barring a disastrous end to the Premier League season) to prove the critics wrong and, frankly, United as an institution is so dysfunctional that the club cannot be trusted to appoint the right man to follow him, but I really wouldn’t be fussed if Mourinho exited stage left in the summer. Stockholm made the approach worth it. Sevilla exposed it for the recipe for disaster it really is.