Fan vs. Fan: Can Newcastle Finally Get Their First Home Win Of The Season This Weekend?

As Newcastle prepare to welcome Brighton this weekend, United fan Alex Hurst from our fan partner True Faith gives us his thoughts on the upcoming fixture.

Brighton make the long trip north to St James’ Park in what is a much more important game for Newcastle United than it is the visitors. Despite a terrific win at Tottenham, Steve Bruce’s side have underperformed in each of their other home league games this season and failed to pick up wins against a poor Arsenal side at St James’ and an even worse Watford.

Following Saturday’s game the next three fixtures for United are Leicester away, Manchester United at home and Chelsea away. If we fail to win this weekend then there’s a realistic prospect that the club will find itself marooned in the bottom three heading into November.

This season was supposed to be different from the previous two. A healthy transfer would have been afforded to the previous manager and hopefully mid table obscurity, a cup run and progression to the top ten was expected.

Instead the departure of the revered Rafa Benitez was a seismic shock that much of the support are unwilling to forgive. To compound matters the club appointed a manager who seems to have been appointed based on the post code he was born into.

I have no doubt that Steve Bruce cares about Newcastle United and much of his CV is more reasonable than some supporters made out, but the fact remains that he would not have been offered another Premier League job. 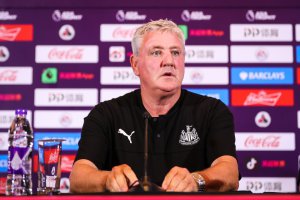 This weekend is a must win for Steve Bruce. The visitors picked up a fine win on the road on the opening day of the season, and a four nil loss at Manchester City drew praise from Pep Guardiola. Brighton have fared well in their last two visits to St James’ Park in the Premier League, picking up (a hugely fortuitous) four points and two clean sheets. St. James’ Park holds no fear for the visitors.

United have defended ‘okay’ so far this season and it is the other end of the pitch that should worry Steve Bruce. Joelinton looks a promising player but rarely receives the ball to his feet in the final third and is often isolated from his team mates. His hard work off the ball is not yielding the results he deserves.

Joelinton to Score First at

Miguel Almiron looks unable to link up to the Brazilian as he struggles to fit in with Steve Bruce’s system. The loss of Alex Saint-Maximan has had a huge effect on the attacking balance of United.

Andy Carroll and Dwight Gayle are both long term injury concerns and both would walk into the side, such is the lack of a goal threat from the forward players so far.

Crowds have dropped to below 45,000 this season and expect more of the same on Saturday. Empty seats, nerves and a massive game for one of these clubs. It’s a must win for Bruce, so it’ll probably be a draw and the wait for a home win continue.