Matthew Crist takes us back to football's summer of love to see what all the fuss was about.

The games were average, the attendances weren’t great and the hosts went out in the semi-finals, but Euro ’96 was about much more than football, as anyone who remembers it will testify.

Only two other European tournaments have provided less goals per game and the introduction of the “Golden Goal” rule often meant that knockout games lapsed into tense and turgid affairs.

But while it’s probably impossible for anyone under the age of 25 to understand the impact of Euro ‘96, using only YouTube as their guide – that tournament is still regarded as one of the most pivotal in the recent history of English football.

For those who don’t remember that summer, it’s difficult to explain just what an impact this tournament had on the nation and the game as a whole.

This was the era of Britpop, the Spice Girls and now football was rock ‘n’ roll thanks to a tournament that captured everyone’s imagination, even if they weren’t keen on the game previously.

The Lightning Seeds, aided by Skinner & Baddiel, replaced The Fugees at No 1 in the charts with their singalong anthem Three Lions, while England players Stuart Pearce and Gareth Southgate were invited on stage at a Sex Pistols gig to introduce the band. 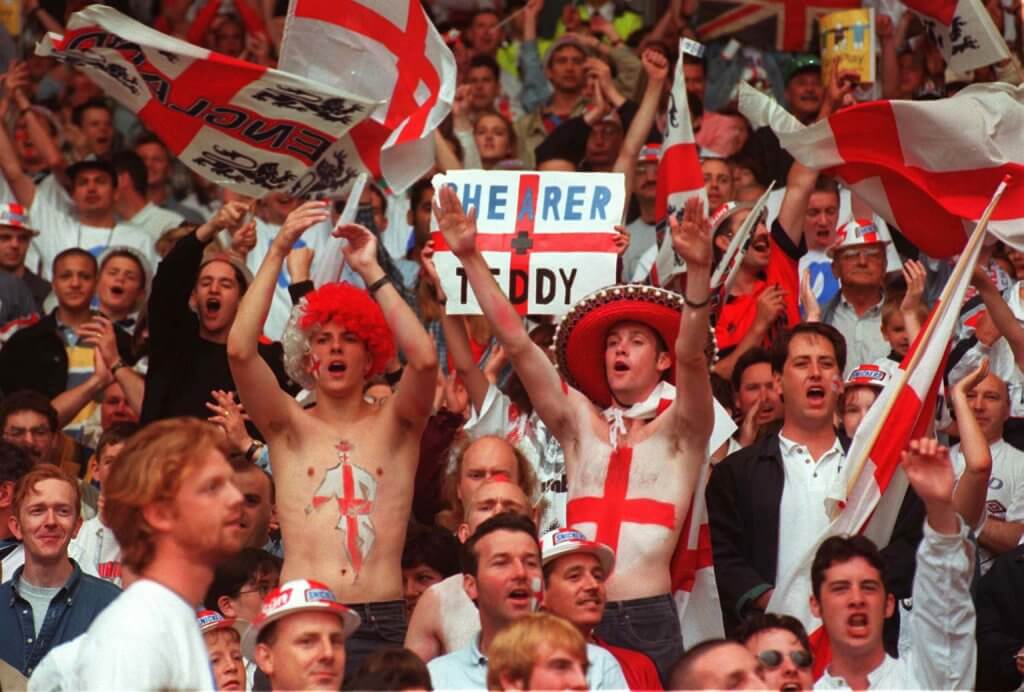 The game was now box office and everyone, it seemed, wanted to be part of the action – all the more surprising really seeing as England were bang average going into the tournament.

In the previous European Championships in Sweden England hadn’t even managed to get out of their group having only scored one goal in three games and, of course, after that they didn’t even qualify for the 1994 World Cup in America.

They’d hardly gone into this tournament in any kind of form either; qualifying as hosts and playing a handful of low-key friendly games in the lead-up to the competition, while other nations battled it out for the other 14 places available.

And true to form, Terry Venables’ side began slowly with a 1-1 draw against Switzerland, notable only for Shearer’s first international goal in 12 games, but the first of five for the tournament which would be enough to win him the golden boot as top scorer.

Holland were then demolished 4-1 by the hosts in what was arguably England’s best result at a major finals since they beat West Germany in the 1966 World Cup final. 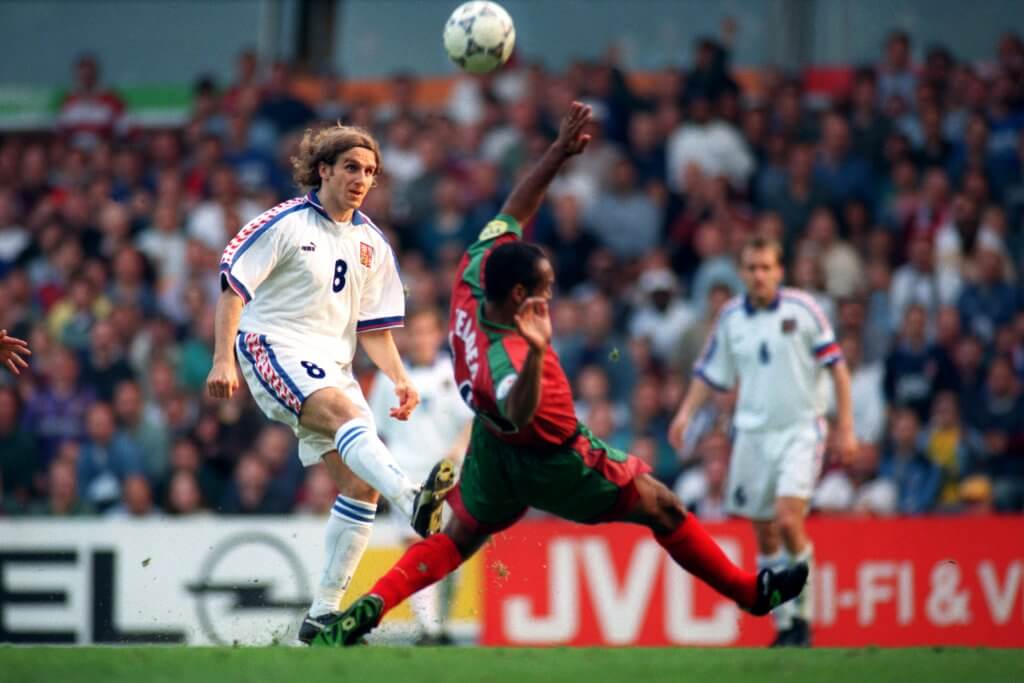 They had to scrap to earn a shoot-out win over Spain but the sight of Stuart Pearce’s fist-pumping celebration after despatching his penalty that helped send them through was enough to exorcise the ghosts of his miss in the semi-finals of Italia ’90.

Then came the semi-finals, and a clash with Germany at Wembley which brought about the end of the dream – but only after a truly epic encounter.

Alan Shearer gave England the lead after three minutes with a typical header but Germany quickly levelled through Stefan Kuntz and, try as they might, England could not find the goal which would send them through to the final.

Teddy Sheringham saw his effort cleared off the line, Shearer sent another header wide and Darren Anderton hit the post in extra-time, all before Paul Gascoigne had the chance to turn in a Shearer cross, only to miss the ball by a matter of inches.

In the subsequent shoot-out; Shearer, David Platt, Pearce, Gascoigne and Sheringham were successful from the spot but Germany also scored with their first five efforts.

That meant sudden death and, after Gareth Southgate’s tame effort was saved by Andreas Kopke, Andreas Muller stepped up to fire Germany into the final. 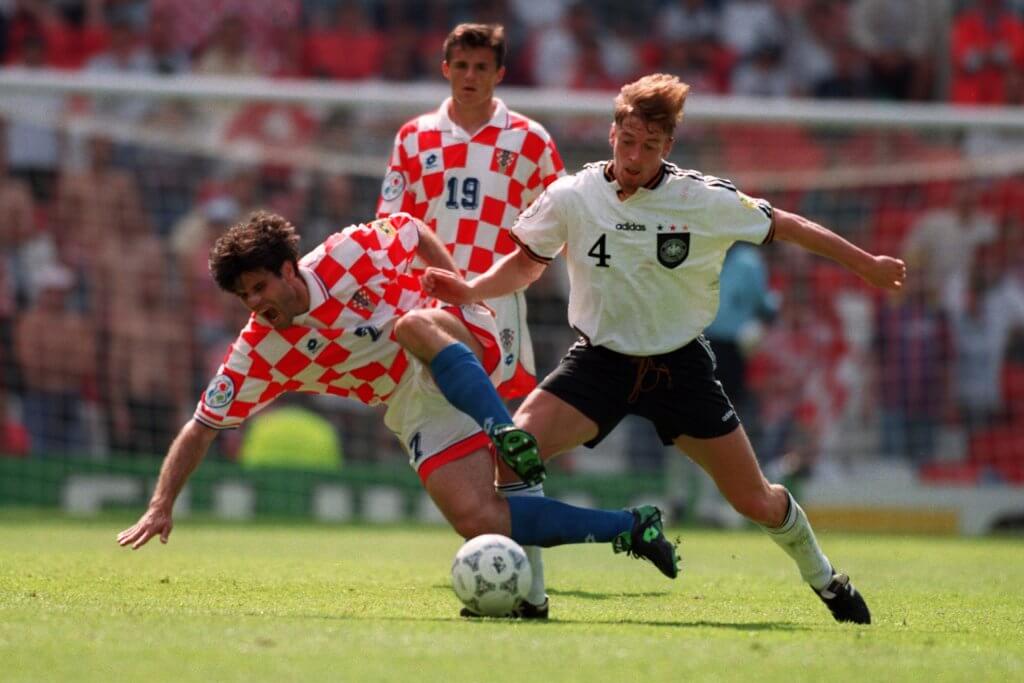 But it wasn’t all about England. In terms of the talent on display, Euro 96 may be one of the greatest tournaments ever featuring Gianfranco Zola, Zinedine Zidane, Dennis Bergkamp, Michael Laudrup and Jurgen Klinsmann; while Pavel Nedved was just beginning to establish himself on the world stage at 23.

Scotland, the only other home nation to qualify for the finals, came agonisingly close to making the last eight too, after an impressive draw with the Dutch and losing to Paul Gascoigne’s wonder goal, Craig Brown’s side beat Switzerland 1-0 but still only finished third in Group A.

Meanwhile, Karel Poborski’s perfectly placed lob for the Czech Republic against Portugal at Villa Park and Davor Suker’s deft chip over Peter Schmeichel for Croatia against Denmark at Hillsborough were all images which still live on in the memory.

And while the final was something of a disappointment as England’s conquerors, Germany, overcame the Czech Republic courtesy of a Golden Goal at Wembley, much of what had gone before had provided England, with its sparse international pedigree, at least something to cling onto.

But Euro ’96 was more than just about what happened on the pitch, it was about what was occurring across the country as the summer played-out against a backdrop of Britpop and Cool Britannia under the slogan: “when football comes home” and, for one glorious month, it felt like it actually had.