Diego Maradona: How El Pibe became the King of Naples

Napoli were wallowing in mid-table when he arrived, but Maradona found his cultural home in Naples, taking them to their first-ever Serie A title as well as securing legend status.

When Diego Maradona signed for unfashionable Napoli in 1984 it was the equivalent of Cristiano Ronaldo joining Crystal Palace.

He made his name at Argentinos Juniors, scoring 116 goals in 167 games before moving to Boca Juniors, where he was similarly effective, but it was when he signed for Barcelona that he really rose to prominence.

Moving to the Nou Camp – for a then-record £5 million fee in 1982 – Maradona won the Copa del Ray in his first season, though the dream move quickly turned into a nightmare.

Despite scoring 38 goals in 58 games and winning the Spanish Cup, League Cup and Super Cup, he often claimed that the “snooty” Catalans made Latin Americans feel like “second-class citizens.”

A broken ankle and Hepatitis in those first 12 months had threatened to bring an early end to his career, minor obstacles seemingly, on what many thought would be a long and fruitful journey with the Catalan club.

Ultimately, though, what did end his time with the club was to be much more of his own making and something far more bizarre which would severely damage the little magician’s reputation around the world. 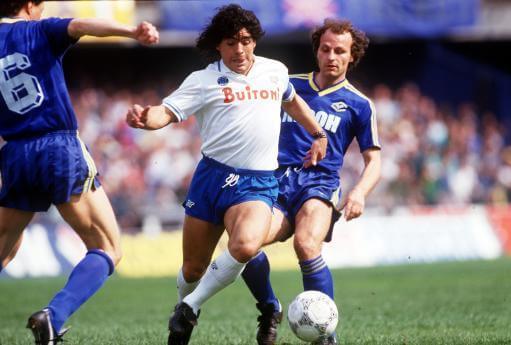 A full-on fight in the Copa Del Ray final of 1984 against Athletic Bilbao would be his undoing after he confronted a number of opponents at the end of a bad-tempered affair which saw him lash-out and head-butt several opposition players.

Dozens were injured in the mass brawl which took place right in front of the Spanish King Juan Carlos, thousands of fans and millions of people watching on television around Europe; it proved to be the final straw for both player and club.

One Barcelona executive later said, “When I saw those scenes of Maradona fighting and the chaos that followed I realised we couldn’t go any further with him.”

His brief stay in Barcelona was over, though few could have predicted where he would go next in one of the biggest transfer coups of its time.

Napoli had won just a handful of honours since their formation in 1926, including two Coppa Italia successes in 1962 and 1976; but that was all about to change thanks to the arrival of the hottest property in the game at that time. 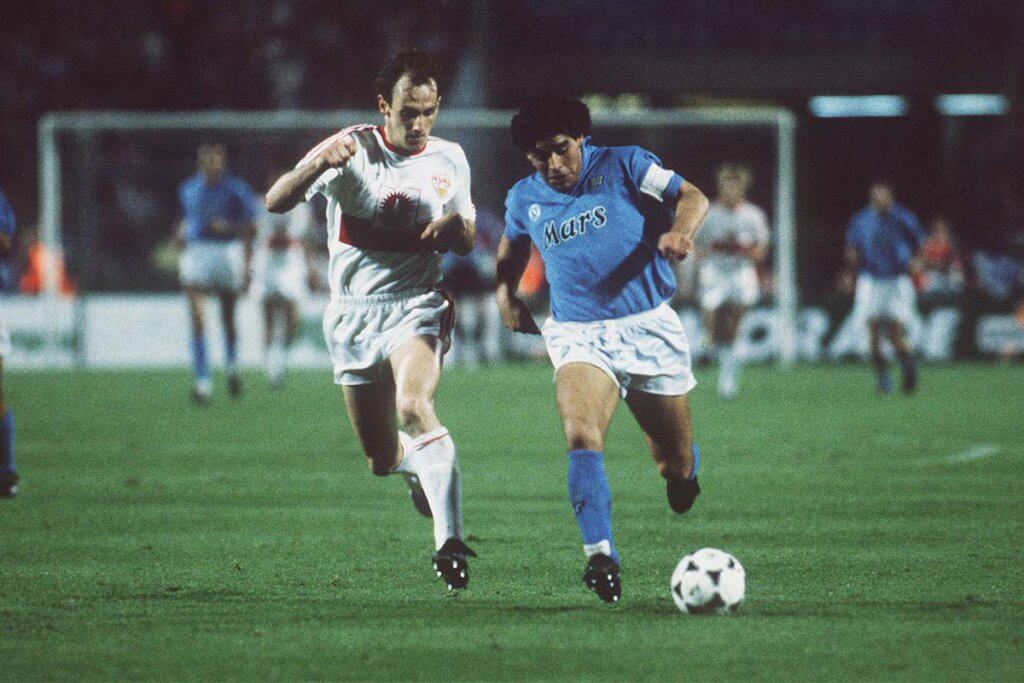 Naples had been starved of success, having never won the title and were longing for an idol – now they had a genuine hero they could call their own.

60,000 season tickets were sold on the back of his arrival and one newspaper even made it clear that: “Despite the lack of a mayor, houses, schools, buses, employment and sanitation, none of it matters because Naples has Maradona!”

Over 70,000 packed the San Paolo stadium on a July day in 1984 to welcome him with banners as Maradona emerged into the sunlight to greet his new adoring public with kisses and displays of his ball-juggling skills.

Such was the magnitude of the move that a local car dealership even offered to give Maradona a brand new Mercedes every six months, while a shoemaker vowed to provide the captain with two pairs of handmade brogues every month as long as he stayed in Naples.

In Maradona’s first two seasons, Napoli finished eighth and then third the following year, but under the guidance of new coach Ottavio Bianchi, he was supported by the additions of Alessandro Renica and Bruno Giordano, meaning he was given much more of a free role – a move which would pay dividends.

In the summer of 1986, his efforts at the World Cup in Mexico elevated him to global stardom while also ensuring that football’s greatest prize went to Argentina as he scored three sublime goals and one which will be remembered forever as the “hand of God” against England in the quarter-final. 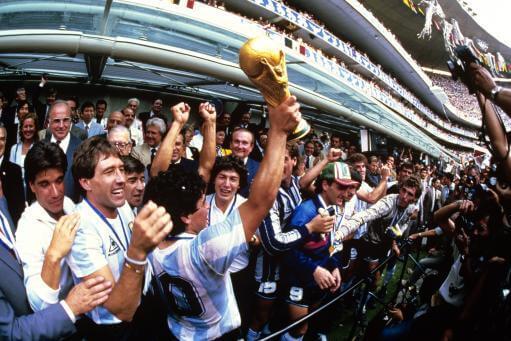 Just a couple of months later and Maradona and his Napoli colleagues were ready to mount an unlikely assault on the Italian title- somewhat lofty ambitions seeing that no Italian club from the south of the country had ever won the league before.

Maradona was the club’s top scorer that season as well as being a key provider as the side lost only three matches all season and finished three points ahead of Juventus to seal the “Scudetto” that had eluded them for 60 years.

The club that had been perpetually mocked by those seen as the more fashionable of Italian football finally had their moment in the sun and their long-suffering fans were going to enjoy every last bit of it with street parties lasting for days across the city.

Napoli’s joy didn’t end there and having secured the league title they then sealed an historic double by winning the final of the Coppa Italia with a convincing 4-0 win over Atalanta. 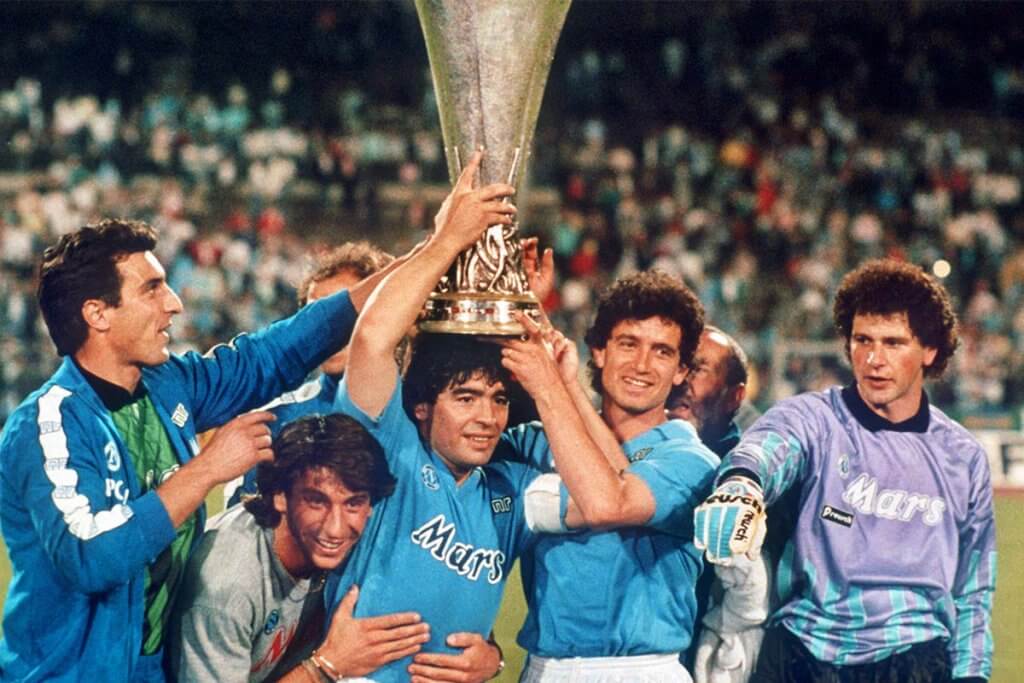 Success wasn’t just confined to domestic football either as, in 1989, Napoli won the UEFA Cup after a 5-4 aggregate victory over Stuttgart, much to the delight of the Neapolitans. “We dreamed about this, and now we’re here in reality,” said Maradona before collecting the trophy.

Maradona’s love affair with Naples continued as he took the club to another Serie A title success in 1990 thanks to 18 goals in 36 games before he eventually left Napoli in 1992 following accusations of cocaine abuse, womanising and mob connections, not to mention bans for various misdemeanours.

In the years that followed, the club’s decline was almost as rapid as their rise to glory, and just a decade after winning the league title, they found themselves in Italy’s second tier with stories of corruption and match-fixing threatening to overshadow all that had gone before

But despite leaving under something of a cloud Maradona is still worshipped in Naples.

And if you ever needed proof of just what this man means to the city some thirty years after his departure one back street bar even has a shrine dedicated to the player, which includes several strands of hair and the ‘tears of Naples’ from the day Maradona departed his adopted home.