Ahead of their meeting in the League Cup semi-final, Matthew Crist looks back at a midweek Manchester derby mauling from 1994, which for United fans who were there, still lives long in the memory...

For five long years, Manchester United supporters lived with the bitter memory of a 5-1 trouncing by the old enemy at Maine Road in September 1989, but that defeat would finally be avenged with one of the most emphatic derby wins for the Reds at Old Trafford.

Alex Ferguson’s men met their Blue neighbours some eight times following that most painful of defeats, with five draws and three wins for the Reds demonstrating their dominance over City in the early 1990s, but it wasn’t just about beating their neighbours, United were out to settle a score – quite literally.

The 5-1 trashing had hurt the United fans who were inside Maine Road on September 23, 1989, so many of them in fact that the game had to be stopped after just four minutes as Reds who were in the home sections of the ground spilled onto the pitch after trouble broke out with home supporters, and when things restarted some 15 minutes later it didn’t get any better.

City raced into an early 3-0 lead and even a wonder strike from Mark Hughes only offered temporary respite for the Reds with two more second-half goals ensuring nothing short of humiliation for a United side who were struggling badly at the start of the season and Blues fans needed no encouragement to revel in their superiority that day for years to come. 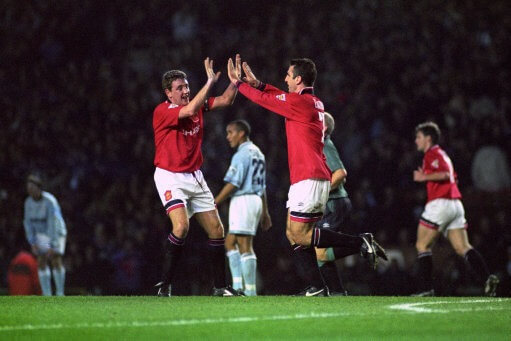 But although revenge would not be swift it would certainly be sweet when it finally came at Old Trafford in the second week of November 1994, with a brutal demolition of their neighbours in a match best remembered for an extraordinary display by flying winger Andrei Kanchelskis.

Despite having been beaten 4-0 by Barcelona at the Nou Camp just a week before in the Champions League the home side, who were seeking a third consecutive Premier League title with the likes of Cantona, Schmeichel, Bruce and Pallister in their ranks, were hot favourites to beat their neighbours long before the game eventually got underway.

It was a different story for City, however, with a boardroom battle seeing the departure of long-time chairman Peter Swales and the arrival at the helm of former Maine Road hero Francis Lee while an injury to first-choice ‘keeper Tony Coton meant that Simon Tracey, on loan from Sheffield United, had to be used as an emergency replacement.

Tracey probably wished he’d stayed the other side of the Pennines as shots and headers peppered his goal from the first whistle in one of the most one-sided derby games for years with the opening goal eventually coming from Eric Cantona midway through the first half before the inspired Kanchelskis doubled the lead before the break.

The second-half saw no let-up and Kanchelskis soon scored his second and United’s third before Mark Hughes made it four with 20 minutes on the clock; but if City thought that was the end of the scoring they were in for a nasty surprise.

With two minutes remaining Kanchelskis set off on another of his lung-bursting dashes into the City half and was found by Cantona who had surged down the right before tucking the ball past Tracey at the second attempt to complete the first hat-trick in a Manchester derby since Francis Lee’s treble back in 1970.

United had finally exorcised the ghosts of September ‘89 and in the most emphatic way possible though the win would be somewhat in vain as Blackburn Rovers pipped United to the title on the final day of the season; but for any Red who witnessed it, the derby match on November 10, 1994, remains one of the greatest nights ever at Old Trafford.