Keeping Faith with Raith: The ups and down of following Rovers

Right at the start of the decade, in March 2010, we went to Dens Park for a Scottish Cup quarter final. Dundee were flying high in the league and were firm favourites, and in the build up the call was to turn Dundee red (our away colours that season).

The noise from the away stand was tremendous before kick-off, and shooting towards our own fans we romped into a two goal lead inside 10 minutes – the second goal coming from club legend Laurie Ellis. It’s my favourite moment as a Rovers supporter, somehow knocking our league cup final triumph of 1994 into second place!

We had another good goal disallowed in the first half, conceded one midway through the second half, but went to Hampden for a semi-final against Dundee’s city neighbours which was unfortunately one match too far for us.

Giving Gary Locke and John Hughes a job in 2016/17! Starting the season well under Gary Locke, winning our first 3 games our form nose-dived and we didn’t win a game between October and February.

Locke was replaced by Hughes with 13 games left, and the team still in 7th position. We did manage 4 wins in those games, but slid into 9th place and the relegation play-offs.

In the process Hughes publicly slated the players’ attitude (despite not having a transfer window in which to replace them) and it was a thoroughly dispirited team which slumped to defeat against Brechin City in the play-off and were relegated to League One.

Finishing in 8th place, ahead of us on goal difference, were Dumbarton – who we had loaned Lewis Vaughan to in January, his place in the team being taken by Rudi Skacel for the final months of his career. It was Lewis’s goals for Dumbarton that made the difference. Rudi Skacel, in contrast, couldn’t hit a cow’s arse with a banjo.

Another one from the first months of the decade – Gregory Tade’s goal up at Aberdeen in the previous round (a midweek replay after the Dons snatched a late equaliser at Starks Park the previous week).

The odds were stacked against us – captain Mark Campbell was involved in a serious car crash the day before the match, and with no other fit centre halfs available we started with midfielder Stephen Simmons in his place in the heart of the defence.

After an hour of backs-to-the-wall defending, a breakaway attack led to Allan Walker bursting into the box and squaring to Tade who had lost his marker to smash it into the roof of the net from a yard out.

6 inches further from goal and it would have cleared the stand. His celebration was unforgettable – sprinting back down the left touchline into his own half, grabbing a scarf and sitting down on the touchline in front of the Rovers support.

Lewis Vaughan. A home-grown player who made his debut in 2013 at the age of 17, and has since become one of the most exciting players in the division.

Injuries have severely hampered his progress (he is currently recovering from a third ACL injury) – without them he would surely already be playing at a much higher level.

Scoring on average a goal every three games his greatest game so far has been scoring a hat trick (sealed with a diving header!) against Dunfermline Athletic last season. Everyone at the club has their fingers crossed that his luck will change after he returns from his current injury.

Dougie Hill grabbing Dunfermline’s Josh Falkingham by the throat during a stramash as the teams went down the tunnel at half-time back in 2012!

Brad Spencer this season. We kinda knew his name from last season when he was at Forfar, but I don’t think many of us really appreciated his technical ability.

He’s a big part of why we’re top of the table – a tidy, efficient player who can see (and make) passes to our forwards that few other players at our level would be capable of. He’s chipped in with a couple of really important goals too. 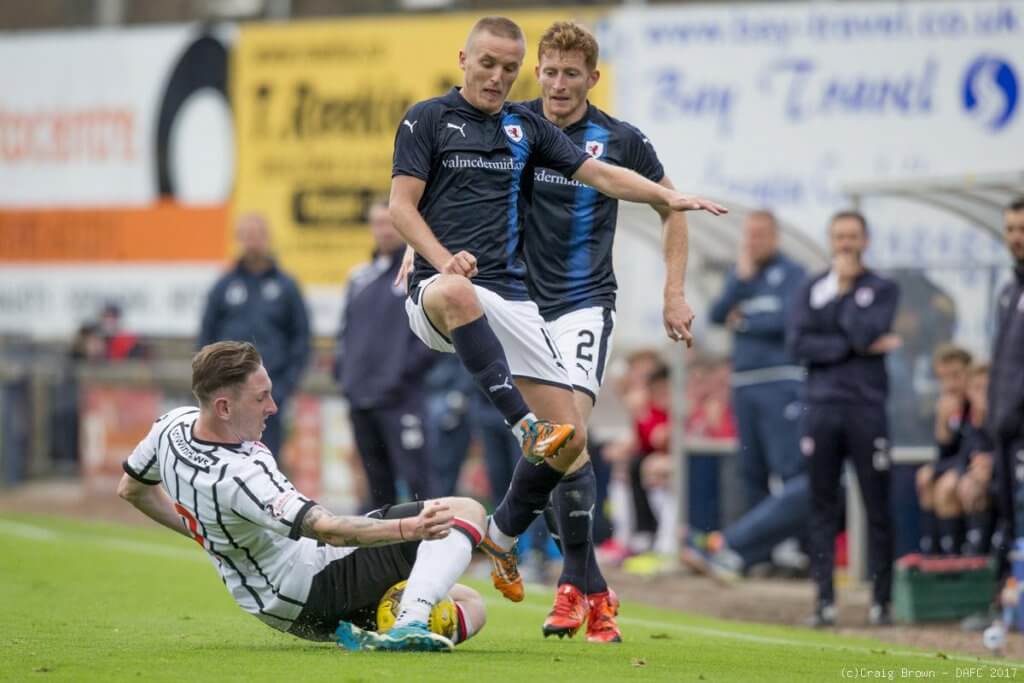 The 2010/11 side that were beaten to the title by Dunfermline. John McGlynn’s work to rebuild the club over the previous few seasons almost came to the perfect conclusion, but our local rivals’ January spending spree (which they arguably could not afford, given their administration a couple of seasons later).

They brought in several key signings meant they pulled away from us – narrowly beating us in the third last game of the season, after which our jaded squad slumped to two more defeats. Dunfermline, on the other hand, after trailing us for most of the season won their final six games to go up as champions.

That we continue to repair the damage done by poor managerial appointments in the last few years, returning to the Championship hopefully at the end of this season.

Continue to bring exciting young players through to the first team and eventually (but not too quickly) to bigger and better things.

Focus on sustainable development of the football club, and building the next generation of Raith Rovers fans. We’ve made great progress in making it a family-friendly club, and have growing numbers of young fans coming to games regularly.

In 2030 I hope our club will be at the heart of the community, with men’s and women’s teams at every age level playing at Starks Park, and the stadium home to the whole community rather than just fans of the men’s first team every second Saturday afternoon.

Most kids in our local schools know about the club, know who are players are, wear our colours in playground kickabouts, and dream of one day running out at Starks Park for the first team.