5 winners had their warm up race in a graded novice chase at Leopardstown prior.

Willie Mullins has won 4 of the 11 renewals of this race with Irish based trainers winning 8 in total.

Just the four runners which is a little disappointing, however this still has the potential to be one of the races of the week with two of the best novice chasers around set to battle things out.

Last season’s Ballymore winner Bob Olinger is two from two since switching to the larger obstacles including a victory in a Grade 2 at Punchestown when last seen.

He’s hardly broken sweat in those victories and it’s still unsure what the ceiling of his ability is.

Similar comments however can be said for Galopin Des Champs. He was also a winner here at last season’s festival when taking the Martin Pipe.

That was a handicap but he has taken the step up to graded level and the switch to fences in the manner of a horse who really could be something special.

He posted a really impressive time according to figures last time and that combined with his slick jumping gives the impression that he could be something very special.

There is likely to be little between the pair but marginal preference for me is with the Mullins runner. 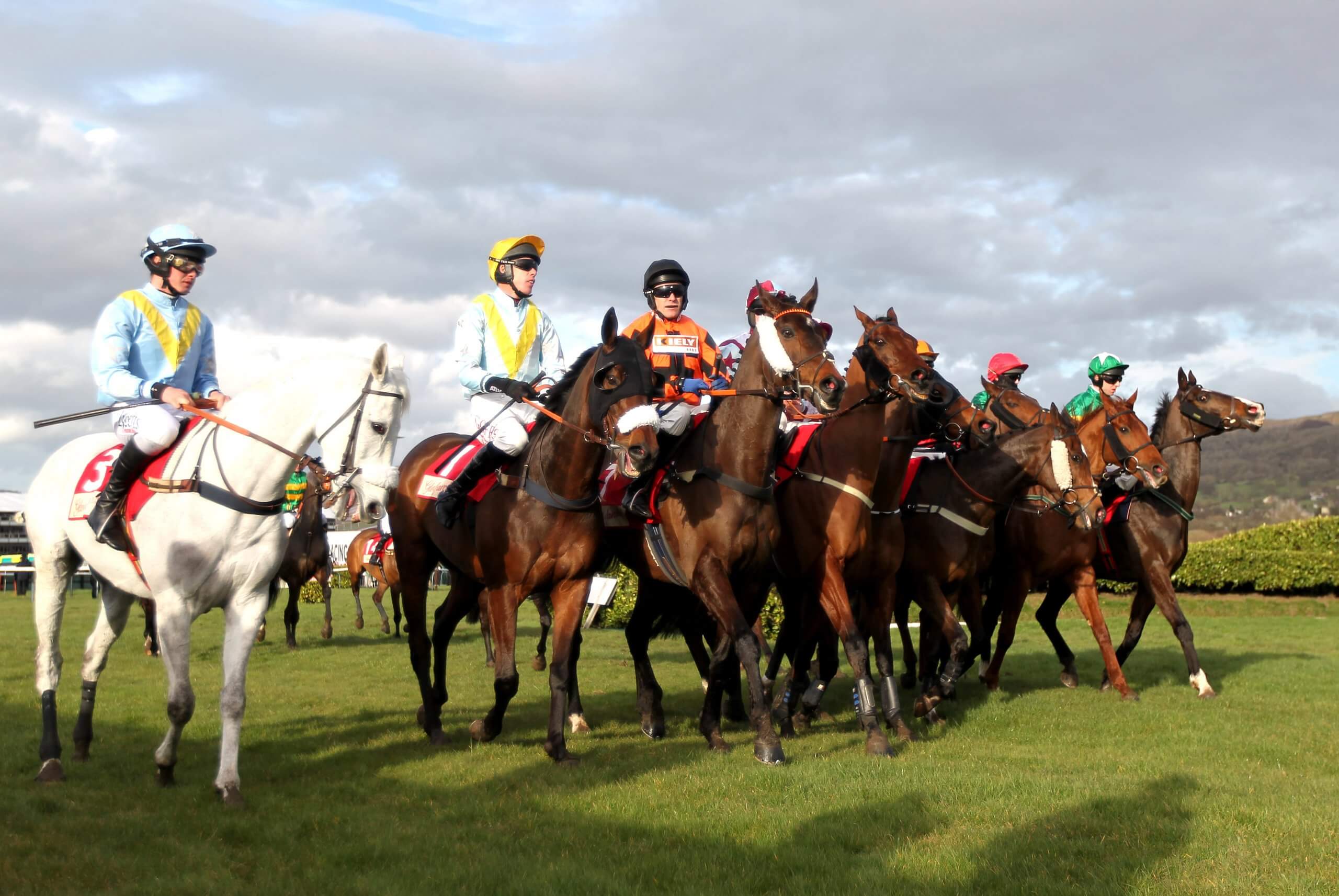 Irish winners normally have run in the Christmas Leopardstown Qualifier, 6 of the last 7

Irish based runners have won the last 6, with 3 renewals courtesy of Gordon Elliot. Willie Mullins and Paul Nicholls still to win race.

Two-time winner of this race Sire Du Berlais is the obvious place to start. He showed he just comes alive around Prestbury Park when finishing second in last season’s Stayers’ Hurdle.

Despite things not going totally to plan this year, he has to be respected under with the excellent Rob James good value for his 7lbs claim.

His trainer Gordon Elliot has dominated this race in recent years and he does look to hold a strong hand once more with three or four other interested runners with Dunboyne interesting me the most.

His form figures are a little uninspiring this season, but they don’t really tell the whole story as he has been unlucky on more than 1 occasion.

His best performance though was in the key trail for this race when finishing seven lengths behind Panda Boy at Leopardstown over the Christmas period.

He looks to have brought along slowly with this day in mind all season and a big run is expected.

At fancy odds Whatsnottoknow is my other selection. Trainer Mouse Morris always has to be respected with whatever he brings across to the meeting.

He doesn’t need to find much with a couple at much shorter odds based on best form and looks to appreciate a sound surface, and of the English based runners, the locally trained Alaphilippe makes most appeal.

Fifth here at the festival last season, he showed enough on his only start this season to suggest he should be able to pick up a handicap from his current mark and if handling the drying ground should go well.

Had raced in that seasons King George 7 from 28, also last year’s renewal for this intermediate test.

3 of the last 5 trained by Willie Mullins

Last year’s winner Allaho is many people’s idea of one of the bankers of this year’s festival. He was extremely impressive in last year’s renewal and under what looks likely to be similar conditions, a reproduction of that effort is going to make him extremely tough to beat once more.

His trainer Willie Mullins bids for his fifth success in this race and whilst that looks likely to happen it’s actually one of his other runners Janidil who I think represents a better play at likely odds.

He was one of the only horses to really put it up to his stable companion when beaten a couple of lengths in John Durkan Chase. Since then, he looked a non-stayer against the reopposing Conflated in the Irish Gold Cup.

Dropping back in trip is the right move and this consistent type looks a good each way play against the short price favourite.

There has been much talk about which race was the ideal for Conflated after his success last time out, suggesting a tilt at the blue-ribbon event on Friday might have been the plan.

Connections have decided upon arguably the easier option which does look the right move for me. That said whether he has the gears at the trip and consistency is another question.

Shan Blue for me has not had the ideal preparation which is enough to put me off and Eldorado Allen, whilst running consistently well this season, looks to have something to find against the best here. 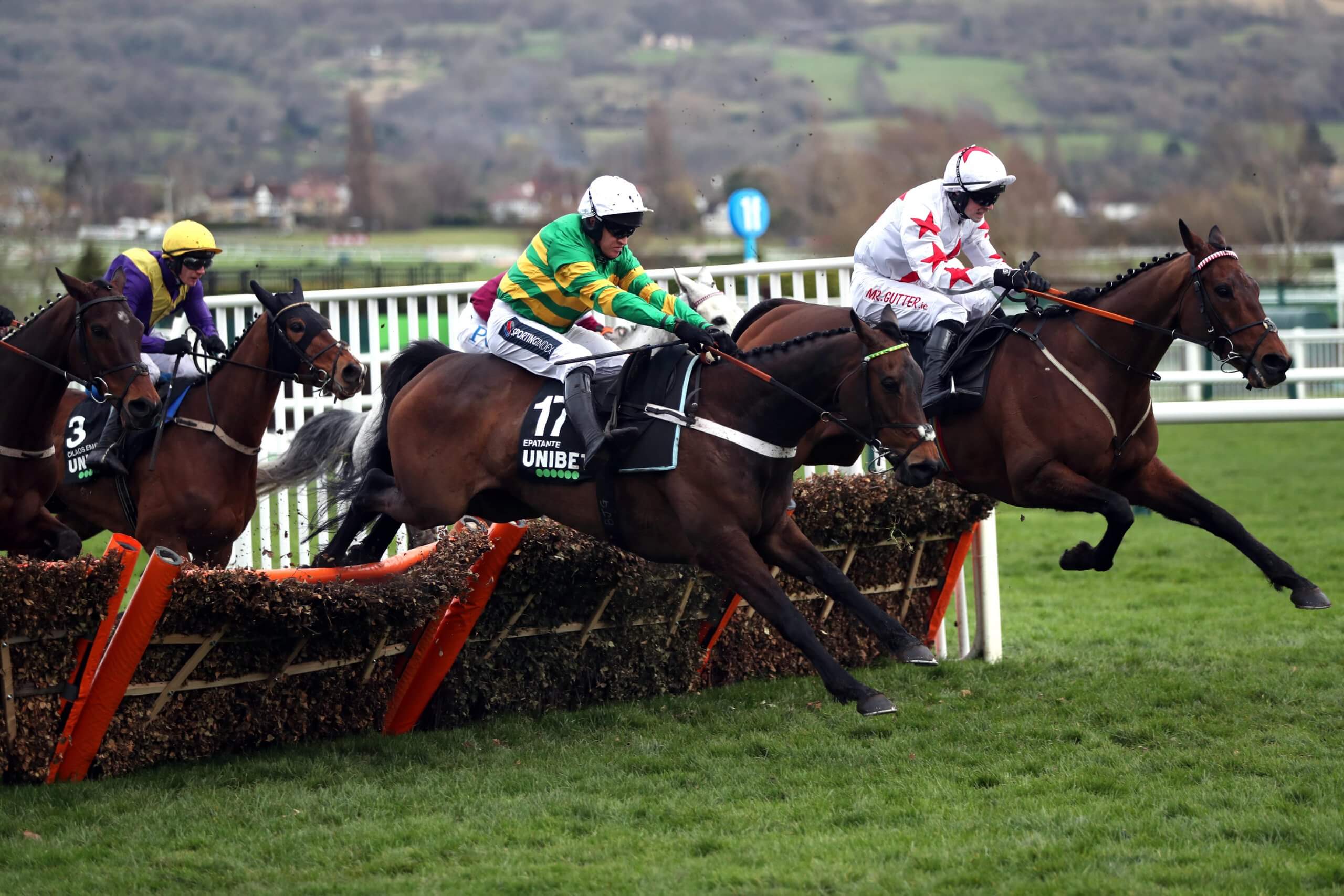 Course form whether this be the Cleeve hurdle 8 of the last 15. or more recently 3 of the last 4 winners from the Albert Bartlett

A race normally dominated by the English until recently who have won 14 of the last 18 renewals. Ireland 3 of the last 5 though.

This looks a wide-open renewal of the days feature with all the leading hopes having some doubt around them.

Last season’s winner Flooring Porter has not found a thing straight forward, not completing on two of his three starts this season.

That said, he looked more like the horse that was victorious here 12 months ago when finishing second to Klassical Dream at Leopardstown.

Similar to last season, he has not been seen since that run at Christmas and if able to adopt the same tactics will no doubt be thereabouts, but at his current odds I’m happy to look elsewhere.

Klassical Dream as mentioned had the measure of the favourite when they met but he’s since put in a poor effort since. He needs to bounce back from that effort which is not impossible at all.

Thyme Hill leads a strong challenge from the English based runners. The Phillip Hobbs trained runner looked back in good heart when finishing second behind Champ in the Long Walk.

He arrives here a fresh horse and has an excellent festival record, finishing third in the Champion Bumper and fourth in Albert Bartlett.

He’s pretty adaptable when it comes to ground conditions but I’m of the impression that he’s best under spring like conditions as shown when winning the Liverpool Hurdle.

Champ brings the class element to the race. He was good enough to win a high-class renewal of the RSA Chase over the larger obstacles.

He’s been switched back to the smaller obstacles which saw him win this season’s Long Walk. He was slightly disappointing in the Cleeve Hurdle and that’s enough for me to look elsewhere.

Paisley Park was the winner of the Cleeve, which was somewhat of a surprise when he left a distance at the start.

He did extremely well to make up the ground lost but won’t be able to get away with that today and though the heart like many other racing fans will be willing this crowd favourite to regain his crown, the head says he is likely to find a couple too strong. 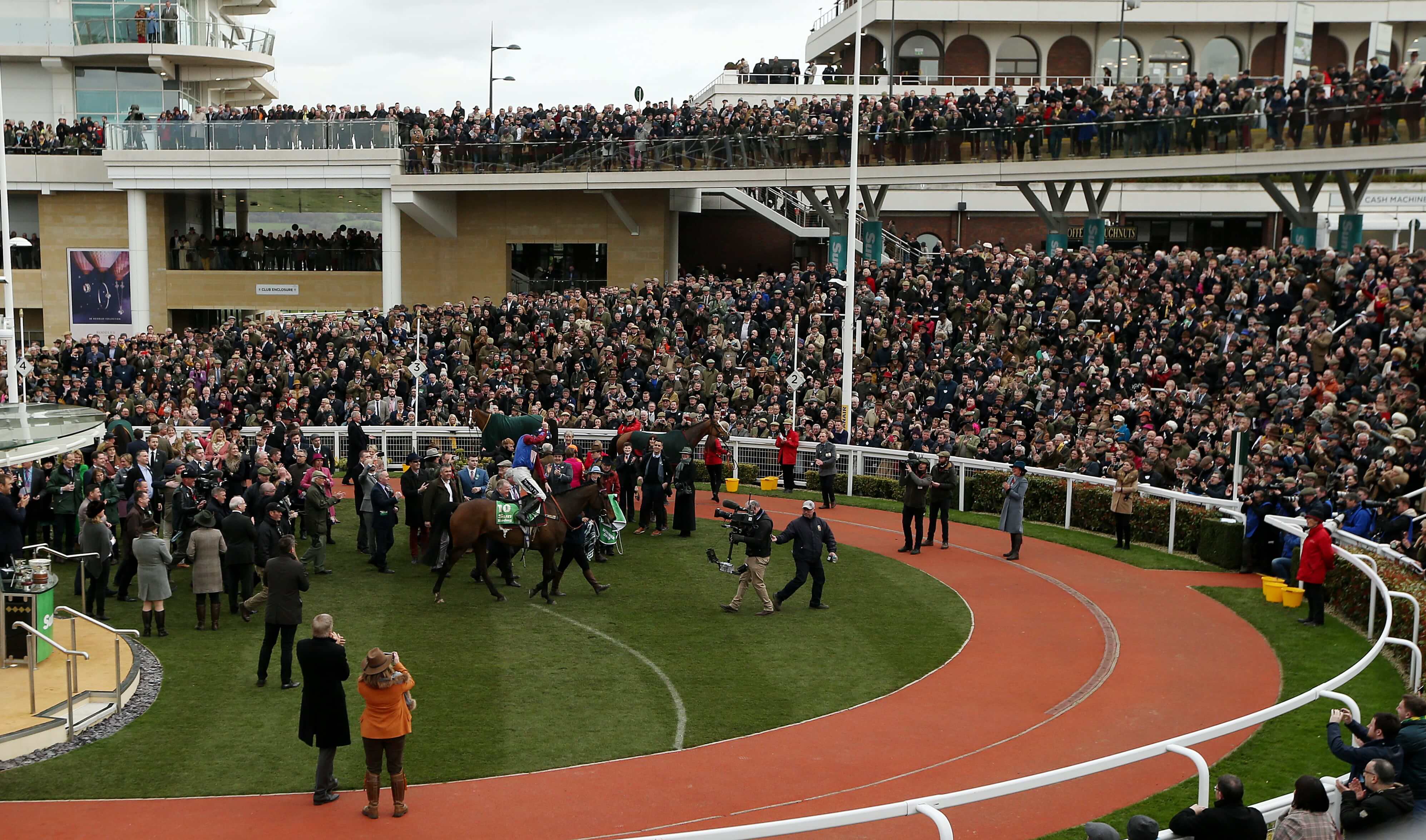 The Irish look to be improving their record with another victory last season. Of the home trainers respect anything David Pipe runs

Wide open stuff as usual. The progressive Celebre D`Allen will be popular having won his last 2 starts but with that comes another rise in the weights which could leave him vulnerable now.

There are a whole host of horses in this who are proven over course and distance including the likes of Imperial Alcazar.

Coole Cody and Simply The Betts, however the one I like most is the Nicky Henderson trained Fusil Raffles, who was fourth in the Racing Post Gold Cup here in December and just struggled over a longer trip last time at Doncaster in the Sky Bet Chase.

The drop back in trip will suit him and he has respectable festival form previously when second to Chantry House in the Marsh Novices’ Chase.

The Irish have started to dominate in this race recently and the one I want to be with is the Gordon Elliot trained Fancy Foundations.

His form figures are a little off-putting but it looks to me that this race has always been the plan this season and makes his handicap debut of what looks a fair mark based on his early chase form. Cavlary Master is a big price but has some respectable form in top handicaps over further this season. This drop back in trip looks more suitable and if the cheekpieces and Tongue tie happen to bring out any improvement he could out run his odds.

Willie Mullins has won five of the six previous renewals and looks to hold a strong hand yet again.

Dinoblue is the shortest of his runners in the market after his impressive victory at Clonmel; she’s open to massive amounts of improvement and the vibes are very positive however she’s simply too short given the depth of opponents she now faces.

Stablemate Brandy Love will be more suited to going this way round than when second at Fairyhouse and has to be respected.

However, it’s the third pick in the market, Grangee, who makes most appeal for me. She was a faller 2 out last time, which is a slight worry, but her form overall has a rock-solid feel to it.

She was not far behind Mighty Potter in a grade 1 at Leopardstown over Christmas and it’s worth remembering she finished sixth in last season’s Champion Bumper. 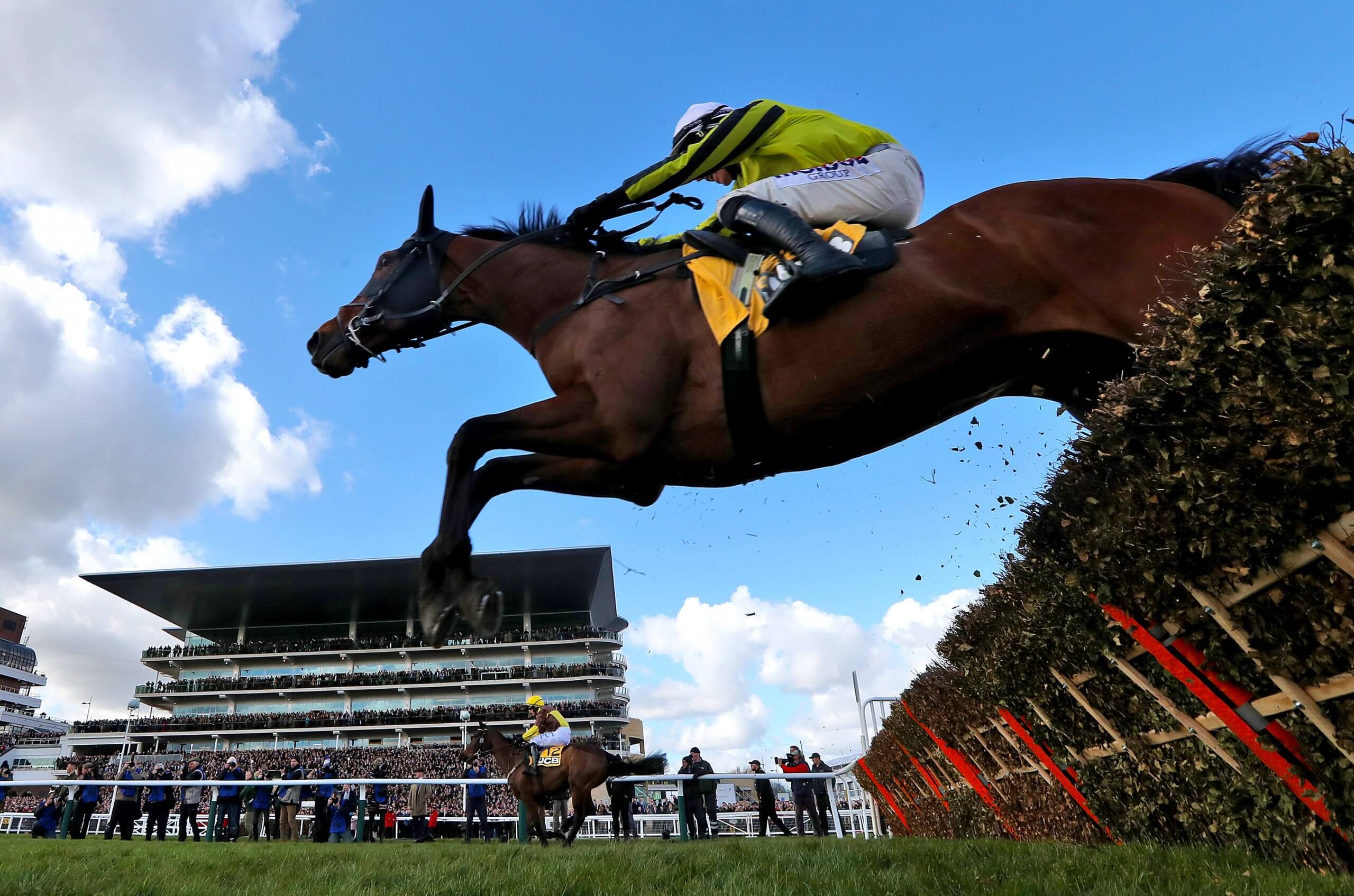 3 of the last 10 winners ran in the Handicap Chase at the Cheltenham Open meeting. The Grade B chase at Leopardstown over Christmas is the key trial for the Irish runners

Gordon Elliot has won 2 of the last 6 and numerous placed efforts. David Pipe is the trainer to follow this side of the Irish sea.

Yet again a race in which Gordon Elliot looks to hold a very strong hand. Frontal Assault under the excellent Rob James is likely to go off favourite.

He’s got some respectable form this season but that’s also over shorter trips and he’s expected to improve on what we have seen now stepping up in trip.

He should go close but is well found in the market. Stablemate Smoking Gun has the added bonus of Jamie Codd in the saddle and he’s got some rock-solid handicap form to his name this season. He’s adaptable to underfoot conditions and has a solid profile for this race.

Another who has shown consistent form in handicaps this season is Mister Fogpathces he put in another solid effort in a competitive handicap when third in the Thyestes at Gowran last time and looks sure to be in the mix.

Cat Tiger has to put in a career best performance to win this but he is in good heart at the moment and could pick up place money.