The final day features the highlight of the four-day Festival – the Gold Cup. Before the blue-ribbon event though, Festival goers are treated to the best of the juvenile’s (formally runners on the flat) in the Triumph Hurdle. It can be a hectic affair with lots of very inexperienced horse charging around and it’s a race recently that the Irish have had the upper hand in and that looks to be the case again this year, with Joseph O’Brien dominating the market. The County Hurdle is another ultra-competitive handicap that features 25+ runners, while the Grade 1 Albert Bartlett Novices Hurdle over 3 miles is usually the lowest quality of the three Grade 1 novice hurdle races but can be an opportunity to find some value with the last five winners coming in at 33/1, 16/1, 11/1, 14/1, 33/1.

The Gold Cup is viewed as the best race in terms of quality of the National Hunt season – a supreme test of stamina and jumping ability. After years of trying with crowd favourite Cue Card, Colin Tizzard finally won jump racing’s most sought-after prize as Native River outstayed Might Bite up the hill in a ding-dong battle. The Dorset handler’s inmate is attempting to become the first horse to go back-to-back since Best Mate won three in a row between 2002-04, but last year was softer than usual conditions and he’s so far been outclassed by young pretenders this season.

With Might Bite flopping this season and Thistlecrack 11 going on 12, there is no superstar in the current line-up. However, last year’s RSA winner Presenting Percy and this season’s King George champion Clan Des Obeaux certainly have the potential to be, and the two currently head the market. The getting out stakes this year will be the Martin Pipe conditionals race which has swapped positions with the Grand Annual as the closer.

Last year it was Samcro, this year Sir Erec is regarded as the Irish banker of the meeting. Few horses have come from the flat with such a pedigree as Joseph O’Brien’s 4yo – a 109-rated stayer that finished third behind Stadivarius at Ascot on Champions Day in October. He’s won both of his starts over hurdles, the latest a Grade 1 at the Dublin Racing Festival where he won impressively by six-lengths. From the same connections, Fakir D’oudairies would be his closest challenger, but JP McManus is likely to split them up with the latter heading to the Supreme.

The British juvenile scene doesn’t look as strong. Fusil Raffles would have been a leading contender but got injured while winning the Adonis. Quel Destin has won his last five starts and looks a very game type and has solid each-way claims but is one that might find something else with too much class on the day. In recent seasons, the Irish juvenile form has tended to be a lot stronger, so I’ll keep this simple, Sir Eric wins!

Did you know? 19 of the last 25 winners won last time out

A maximum field ran at a frenetic pace and another tricky puzzle for punters to solve with Fansbet currently offering 10/1 the field. The Irish have one eight of the last 12 running’s, but British trainer Dan Skelton also has an excellent record in this race – winning it in 2016 with Superb Story and 33/1 outsider Mohaayed last year. However, it’s his former boss Paul Nicholls who we think holds the ticket to this year’s edition.

Capitaine is a former Grade 2 winner over hurdles and after dropping down the weights, he won impressively in a competitive handicap at Taunton off a mark of 131 to rise to 137. The 6lb rise isn’t much of concern as it’s 2lb below his highest winning mark, while he’s been rated as high as 145 when he finished five-lengths behind Finian’s Oscar in the Tolworth in 2017. The 7yo is not always the simplest of rides but has bags of talent and a nice weight for this race.

A gruelling test for novice’s, often won by horses that rarely go on to be superstars. Whereas the Supreme and the Ballymore have a history of producing future festival winners, the last 10 winners of the Albert Bartlett have only gone on to win 21 races at any track between them, of which Uknowwhatimeanharry and Bobs Worth account for 11 of those.

Although only novice’s, a battle-hardened, tough type is required for this three-mile trip. No horse (including point-to-points and bumpers) has won this race in its history that had run fewer than five times in their career, while only two had run exactly five. So, a sexy profile that only has a couple of runs under their belt, like Santini last year, is often best avoided. Towards the head of the market this year, that included the likes of Dickie Diver, Birchdale and Battleoverdoyen (though the latter is likely to head to the Ballymore).

Lisnagar Oscar is favourite after winning a useful trial at Haydock in convincing fashion. However, Rebecca Curtis’ gelding is 6/1 and although he finished a long way back at Haydock, Rockpoint beat Lisnagar Oscar over C&D in December, yet is almost five times the price. Colin Tizzard’s 6yo is one of the most experienced in the field having made 13 starts under rules and at the prices, we’re willing to forgive him his last start. Derrinross has twice won well on testing ground so would be of interest if the rain arrives, but Dinons is the other to peak my interest. The Gordon Elliot trained 6yo has run 10 times already this season, including when he hacked up around here in October, giving weight to the useful De Name Evades Me, which looks to be really strong form.

Did you know? 12 of the last 14 had run over three-miles before

The highlight of the festival, with the best chaser in training determined over this demanding test. Not only must the horse have class to win this race, but they’ve also got to be a superb jumper and stay the 3m2½f trip. Native River is aiming to defend his crown and the test of a Gold Cup certainly suits his gutsy attitude, but unless there is a deluge, he’s not going to have his favoured soft ground. After being ruled out through injury last year, stablemate Thistlecrack is finally getting his chance but the likable gelding is 11yo now and the last 19 winners were all younger than 10.

It’s a race that suits a young progressive horse, often running in the race for the first time. Two of those are Clan des Obeaux and Presenting Percy who are the joint 7/2 favourites with Fansbet. The former couldn’t have been more impressive in his last two starts and trainer Paul Nicholls is the master of preparing his horses for the big day, but there are question marks over the form of his King George win. Presenting Percy looks the one to beat given his exemplary festival record, landing both the Pertemps and last year’s RSA in fine style. Trainer Pat Kelly never takes the conventional route to Cheltenham, but just one run over hurdles this season will have Percy backers sweating.

At this stage though, we’ll look for a bit more value. Willie Mullins has never won the Gold Cup and is throwing four darts this year of which I give three a fighting chance. Al Boum Photo fell behind Presenting Percy 12 months ago but has won the Thyestes convincingly this season and is the progressive type to go well. However, in his three attempts at three-miles or more, he has finished 5th, ran-out and fallen so the trip is a question mark. Bellshill won the Irish Gold Cup in February, but the race cut up due to the ground and at Christmas he finished nine-lengths behind wide-margin scorer Kemboy in the Savills Chase. The form of that race is working out really well as Monalee has since come out and won, while Road To Respect only lost out by a short-head to Bellshill in that Irish Gold Cup.

Kemboy was fourth behind Shattered Love in the JLT last year but has improved no end for a step up in trip, reversing the form to beat the mare by 34L over Christmas. He has the best form in Ireland and whether that is as strong as Clan des Obeaux in Britain remains to be seen, but at 17/2 I’m willing to find out.

After the thrill of the Gold Cup, the best hunter chasers take each other on over the same C&D, where again the amateur jockey bookings will be key. Pacha Du Polder is aiming for a unique hat-trick in the race and will no doubt be popular on the day as trainer Paul Nicholls has said the 12yo will retire after the race. Ucello Conti has serious claims for Gordon Elliot but an eyecatcher in the betting is runner-up in last year’s Ultima handicap, Shantou Flyer. At 9, he is relatively young compared to his rivals and still in the prime of his career. With plenty of Cheltenham form (two wins and three runners-up), he’s the selection.

Previously the closing race, this is always an exciting affair where often a patient ride can pay dividends as they go flat out over two-miles. Magic Saint is the 8/1 favourite and while impressive at Wincanton last time out, there are risks involved in backing a horse that has run just three times in Britain in such a frenetic race. Gary Moore’s Not Another Muddle came fifth on his handicap debut over hurdles in the 2017 Imperial Cup and although he’s ran just four times since, he’s impressed on each occasion. He’s relished the bigger obstacles, winning three of his four chase starts, with the exception when coming third to 150+ rated horses Dolos an Gino Trail. He’s gone up 8lb this season but there looks to be plenty more improvement in there and 10st8lb is a nice weight for this race. In each of his previous chase starts, the lightly raced 8yo has been held up out the back, which should suit and he’s one we can definitely see being shorter than 14/1 on the day.

The final race of the festival and a final chance for punters to make some money back off the bookies. However, that’s a lot easier said than done as it’s another fiercely competitive handicap. Uradel and Dallas Des Pictons are well fancied in the market for Irish heavyweights Willie Mullins and Gordon Elliot respectively. However, at 6/1 in such a competitive heat we’ll look for a little extra value.

This is a race that Elliot always targets and while Dallas Des Pictons will be his first string, another Gigginstown owned horse, Éclair De Beaufeu, is of interest. The 5yo is given a rating of 136 so should get in and has form on one of the market leaders. He finished fourth on his handicap debut and a length-and-a-half ahead of Uradel, receiving 3lb. Although only 1lb this time, he’ll receive weight again so looks overpriced at 25/1.

Finally, I tipped up Early Doors for the Coral Cup, but he is also entered here, so if he lines-up, he’s be of interest off a mark just one pound higher than when finishing third last year.

Did you know? Nine of the last 10 have been won by five or six-year olds 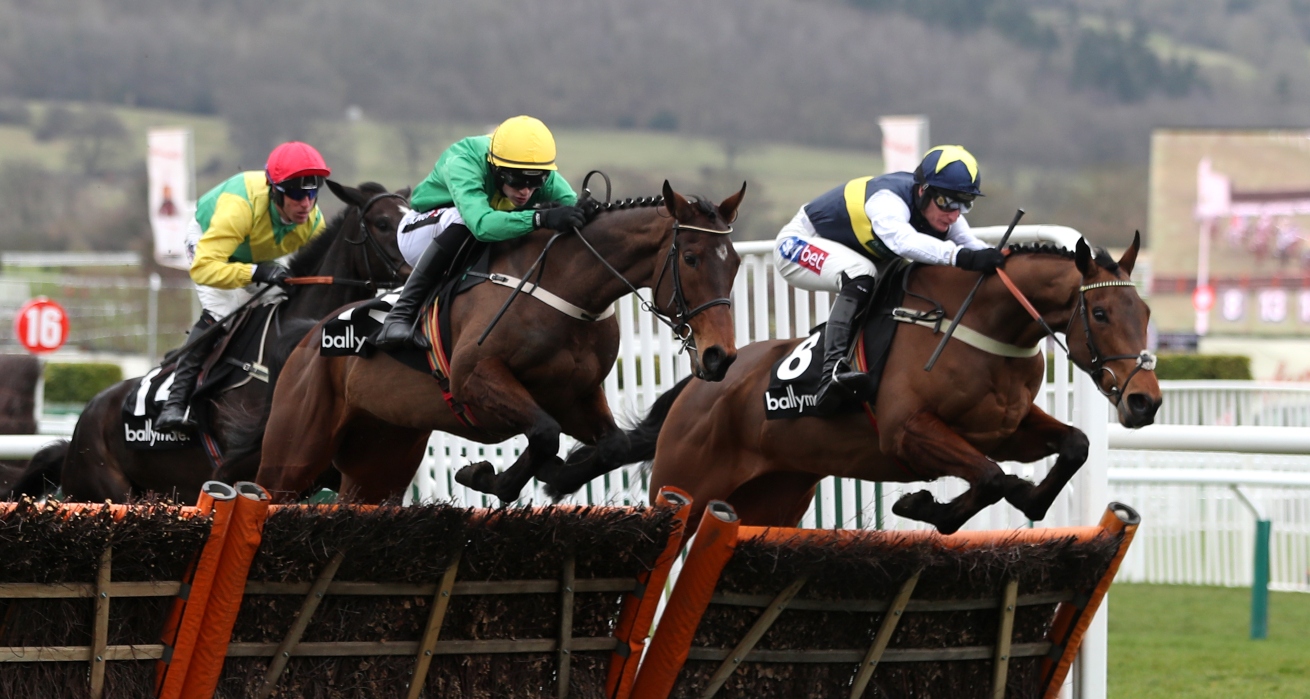