All eyes are on the London Derby

For Chelsea the visit of Tottenham Hotspur on Sunday is win or bust. The Blues simply must overcome their London rivals, fail to do so and another year outside of the Champions League becomes almost a certainty.

Antonio Conte’s men sit fifth in the Premier League, five points behind Spurs. The gap can’t afford to get any bigger given only seven top-flight games will be left to play after the clash at Stamford Bridge. Chelsea are 27/20 for the win today at Fanbset.

Tottenham, as things stand, hold all the cards. But they’ve shown their hand too often against Chelsea over the years and been burnt. It’s why Mauricio Pochettino will not take anything for granted.

The game is the pick of this weekend’s Premier League action. So we asked our friends at Football Whispers preview the match, looking at how the two sides will line up and analysing who and where the game will be won.

It’s not easy to work out a manager’s team selection after an international break. Players can return tired, injured or out of form. However, those variables do mean the tried and trusted get the nod, and that should be the case at Stamford Bridge.

The Chelsea side tends to pick itself, the only real question mark is over who starts up front. Alvaro Morata is likely to get the nod, however. The Spaniard had the international break off and netted his first goal of 2018 last time out. 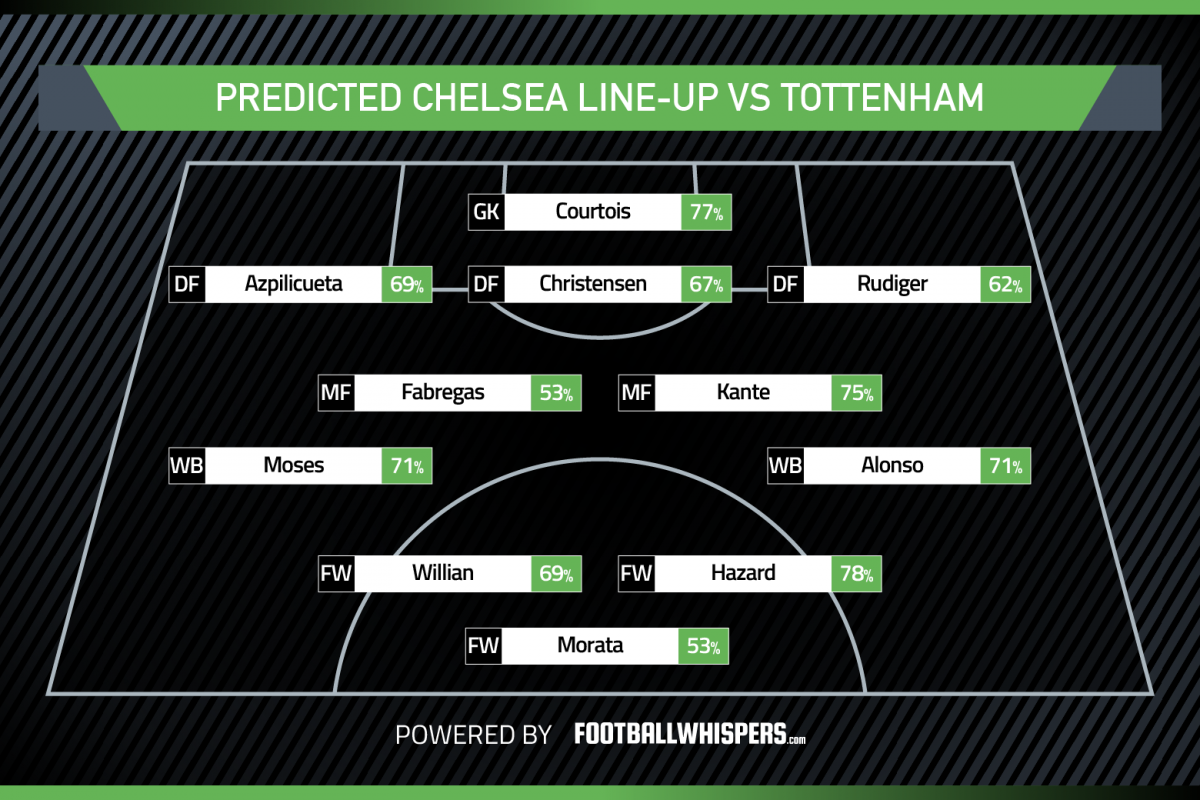 Pochettino has one big problem to solve: who starts in place of the injured Harry Kane? Fernando Llorente would be the natural replacement but his lack of mobility could mean Spurs are stifled by Chelsea’s back three.

It’s why Son Heung-min may lead the Tottenham attack. His pace and movement can stretch the hosts’ defence and create space for the likes of Dele Alli and Christian Eriksen. 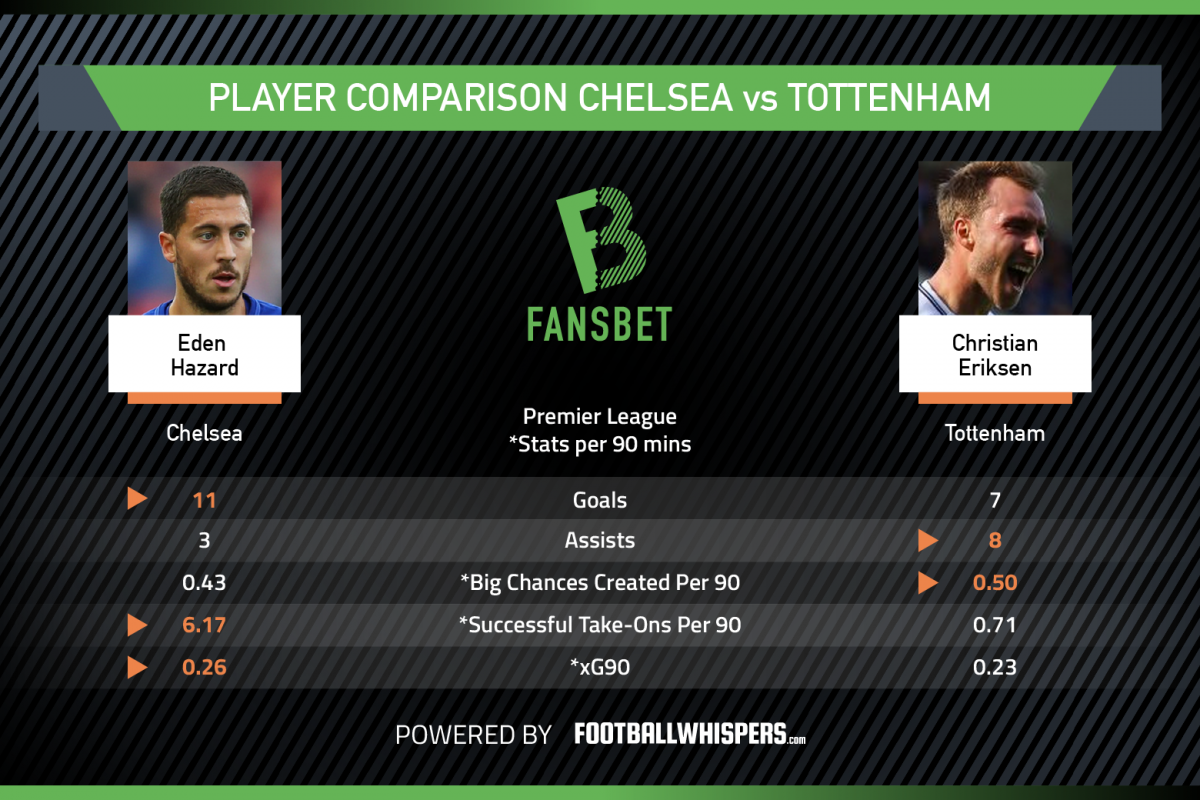 With the pressure on Conte is likely to go with what he and his players know best; 3-4-2-1. It’s the system that clinched the Blues the title last season and although the Italian has deviated away from the shape at times this term, it’s what he should utilise again Spurs.

Pochettino and Spurs’ tactical flexibility is one of the side’s great strengths. The Argentine could set his team up to mirror the Blues with a back three, but with no Kane is expected to deploy a 4-2-3-1 shape.

The onus will then be on the likes of Alli, Erik Lamela and particularly Eriksen to create for Son, who won’t have the same volume of chances the England striker tends to enjoy when fit.

Eric Dier’s inclusion in the Spurs starting XI would, however, enable Spurs to switch tactical structures within the game through his ability to drop into centre-back when required.

The Premier League is blessed with a plethora of outstanding attacking talent, but few are as graceful and effective as the Chelsea and Spurs stars.

In Hazard the Blues possess arguably European football’s best dribbler. He draws defenders in before nipping away beyond reach. It’s why he’s averaged an impressive 6.17 take-ons per 90 in the Premier League this term, a figure no other player can better.

Eriksen, meanwhile, is the brain of the Tottenham side; the man who weaves midfield and attack together effortlessly.

The Denmark international’s role may be tweaked in the absence of Spurs’ top scorer, but Pochettino would be wise to let the 26-year-old affect the game off the right flank. This term hs has averaged 1.68 open play key passes and has an xA90 of 0.18. 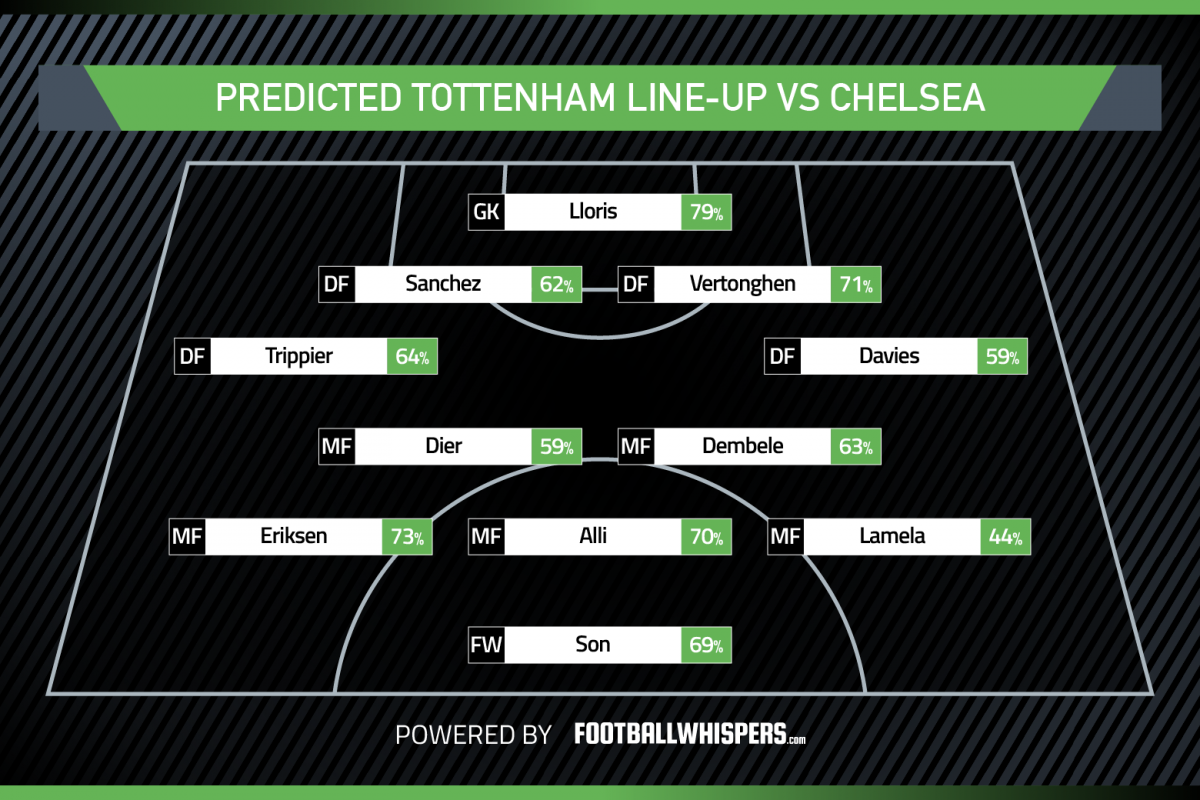 Without Kante Chelsea’s midfield is one-paced and brittle, his importance can’t be understated. He is a one-man wrecking crew, breaking up play and nipping at the heels of opposition attackers.

This term in the Premier League he has averaged 3.51 tackles per 90 and 2.01 interceptions, team highs, but in recent weeks has started carrying the ball from deeper positions to supplement attacks, it is another string to his impressive bow.

If Eriksen is the brain of the Tottenham XI, Dembele is the heart. He patrols midfield with a swagger born out of confidence. He knows he can beat a man if needed, thread a pass if required, brush aside players to recover the ball, or just keep possession ticking over.