Boys of Summer: When Liverpool won the title in June

It looked for a long time that Liverpool would win their earliest ever top-flight title but the Coronavirus enforced suspension means it will likely be one of their latest, though they do have form when it comes to being crowned champions in summer.

The 1946/47 season was one of the most eagerly anticipated ever with top-flight football having been shelved for seven years due to the outbreak of war, but when the action did get underway fans were made to wait for its conclusion.

For Liverpool, the inaugural campaign following World War II was one of the most memorable in its rich and illustrious history, setting a precedent for future Anfield success and achieved against all the odds; an ultimate triumph against adversity that the British weather did its best to scupper.

Going into the season the Reds were far from fancied; having been knocked out of the FA Cup (which resumed a year before league football) in the Fourth Round by Bolton Wanderers, they had finished in 11th in the table prior to the outbreak of war in 1939 and had not won a trophy since their league success back in 1923.

To make matters worse, they had lost one of their finest players of that era with wing-half Matt Busby deciding to pursue a career in coaching by becoming the new manager at Manchester United.

If that wasn’t enough, goal-scoring sensation Billy Liddell, who scored 228 goals in 534 games over 16-seasons, missed the start of the campaign as he was still occupied with the RAF.

Fortunately for the Anfield club they could still rely upon the potent strike partnership of Abert Stubbins and Jack Balmer, who would both score 24-goals as Liverpool found the net 84 times. 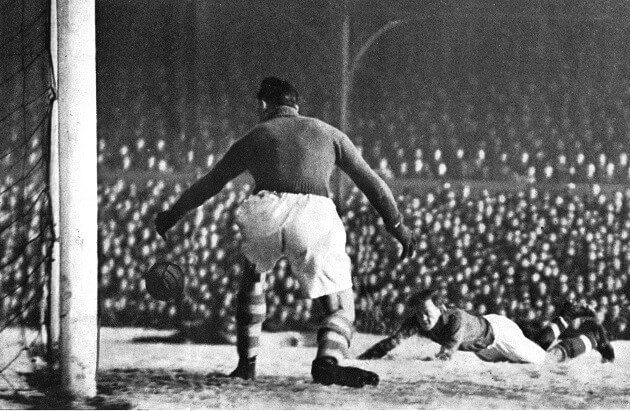 Stubbins, the only footballer to appear on the cover of The Beatles’ 1968 album: ‘Sgt. Pepper’s Lonely Hearts Club Band,’  had been a prolific scorer for Newcastle and on attracting the attention of both Merseyside clubs, apparently flipped a coin to decide where his future would lie.

Meanwhile, Jack Balmer would bag three consecutive hat-tricks for the Reds in November and at one stage had scored all of Liverpool’s last 10 goals, though incredibly, even with Balmer and Stubbins in their ranks; Manchester United, Sheffield United, Wolves and Stoke would all score more goals than the Reds.

Just as well manager, George Kay, was able to rely upon a rearguard which featured the likes of Bill Jones, Jim Hartley and Eddie Spicer, protected by wing-half and future Reds legend Bob Paisley, who combined to ensure that no one conceded fewer that season.

Perhaps not surprising then that in August they opened their campaign with a 1-0 victory at Sheffield United courtesy of a last-minute Len Carney goal in a match that was played in monsoon-like conditions, something of an indication of what was to come for the months that followed.

Liverpool’s form was as remarkable as it was unpredictable. On September 7th they beat Chelsea 7-4 at Anfield and then in their next match, just four days later, they went down 5-0 to Matt Busby’s Manchester United.

Nevertheless, just two defeats in their first 16 games saw the Reds surge to the top of the First Division before one of the worst winters on record almost scuppered their achievements and ensured the campaign would go into extra-time.

Temperatures plummeted so severely that pitches became treacherous ice-rinks and when the thaw finally set in they were transformed into unplayable quagmires, meaning games were called-off and those that were able to go ahead became little more than a lottery.

In a bid to prevent the country from grinding to a halt, the government ordered a widespread industrial shutdown and the knock-on effects were felt across the nation. 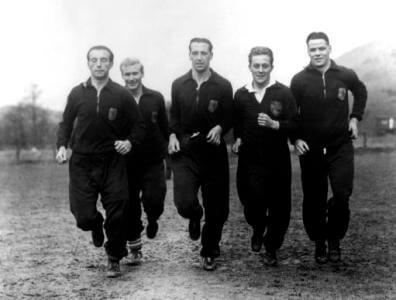 Rail and road networks ground to a halt, city streets were plunged into darkness and many factories were forced to close, meaning millions found themselves temporarily out of work.

Football was badly affected too, as attendances for the games which did take place plummeted and due to a severe paper shortage, the size of match-day programmes were also significantly reduced – some to just a single sheet.

Not surprisingly, the fixture list was decimated by postponements and Liverpool soon found themselves losing momentum in their unlikely title charge as four consecutive defeats in January saw them slip to sixth in the table.

On February 22nd more than half that day’s scheduled games were called off though, as it turned out, Liverpool’s game at home to Huddersfield that afternoon was one of the few which did go ahead.

So bad were the conditions that for the visit of Blackburn Rovers at the beginning of March, the touchlines at Anfield had to be painted blue to make them visible on a surface described as a ‘sea of porridge.’

With the entire structure of football across England in danger of collapse, the authorities eventually saw sense and a six-week extension to the season was granted, meaning it would stretch well into June.

And as conditions improved, so did Liverpool’s form; so when they travelled to Wolverhampton on May 31st to contest their final game of a seemingly never-ending season, they did so on what was the hottest day of the year with temperatures well into the 90s.

A 2-1 win over Wolves ensured that the Reds completed all of their league fixtures and once again sat top of the table, a point ahead of second-place Manchester United with Wolves in third.

However, because of the fixture backlog, one outstanding game remained which wouldn’t take place until a fortnight later.

And it wasn’t just any game as, if Stoke City, who were in fourth spot, beat Sheffield United, they would pip Liverpool to the title on goal difference, meaning it was to be an agonising wait for Liverpudlians everywhere.

But on June 14th 1947, at Bramall Lane, the venue where Liverpool had opened the season under a downpour the best part of a year before, Stoke failed to get the result they needed and the title would be heading to Anfield after all.

To add to the drama, the very same afternoon, Liverpool played Everton in the final of the Liverpool Senior Cup at Anfield, starting fifteen minutes after the match in Sheffield.

“Our minds were more on what was taking place at Bramall Lane than at Anfield,” explained Liverpool legend Billy Liddell in his autobiography when remembering that incredible afternoon.

“We defeated Everton 2-1, but the last ten minutes were a mere formality, for the news had been given over the loud-speakers that Stoke had been defeated and the title was ours.

“The crowd didn’t care two straws what happened after that. All they wanted was the final whistle, so they could come swarming over the ground from the Kop and Kemlyn Road and carry us off the field.”

The weather-affected 1946/47 season truly was a marathon as Liverpool eventually lifted their fifth League Championship, some 10-months after kicking-off the longest campaign in English football history – until now that is.

Leeds v Luton: How the Hatters helped Clough get the sack

Famous Five: The FA Cup finals we still talk about

Everton 4 Liverpool 4: One of the greatest Merseyside derbies ever played