Celtic are coming off the back of historic back-to-back trebles in Scotland, but the Glasgow giants and Brendan Rodgers will have every intention of once again improving their squad and making the next step up after the summer.

After two years at Celtic Park, Rodgers has now reached a stage in which a number of his key players are needing replaced â€“ especially in attack. Stuart Armstrong, Celtic’s most potent No.10, is almost one year from his contract expiring while top goalscorer Scott Sinclair continues to diminish with each, passing month.

With plenty of money in the bank, Celtic can now dive straight into the summer transfer window and seek out attacking players to rebuild a new squad around. That is where Swansea City’s Jordan Ayew, who is reportedly a Celtic transfer target, comes in.

Our friends at Football Whispers have taken a look at what the forward could offer Celtic and why Rodgers may be interested in the services of the 26-year-old Ghanaian international.

Why do Celtic want Jordan Ayew?

Celtic’s forward line is likely see something of a reshuffle for a number of reasons this summer.

The first reason is Sinclair’s stumbling form. Although 18 goals and 17 assists may look like an impressive return for the wide forward, it is a notable drop off from the 2016/17 season.

When he first arrived in Glasgow he stunned fans with 25 goals and 11 assists from the left.

That may not seem like a notable drop off, but his averages per game from the first season to the next are quite telling. As a left winger â€“ where Ayew may play at Celtic â€“ Sinclair’s goals per game dropped from 0.56 to 0.4 per 90, his assists fell from 0.24 to 0.18 and his crossing accuracy took a massive dip as it plummeted in accuracy from 55 to 27 per cent.

Rodgers has combated that by using the on-loan talents of Odsonne Edouard out left whenever he can. However, it remains to be seen as to whether the Scottish champions can agree a fee to sign the PSG striker on a permanent basis. If not, then Ayew may be an ideal alternative.

The Ghanaian’s preferred position is as a natural No.9 and he could similarly be of use if Celtic were to sell their key striker, Moussa Dembele. The former Fulham youngster has constantly been linked with moves to the Premier League and was subject of Tottenham Hotspur transfer rumours last summer.

He may finally make his move this summer after failing to make it in to the French national team. If so, then Ayew could be an ideal replacement. 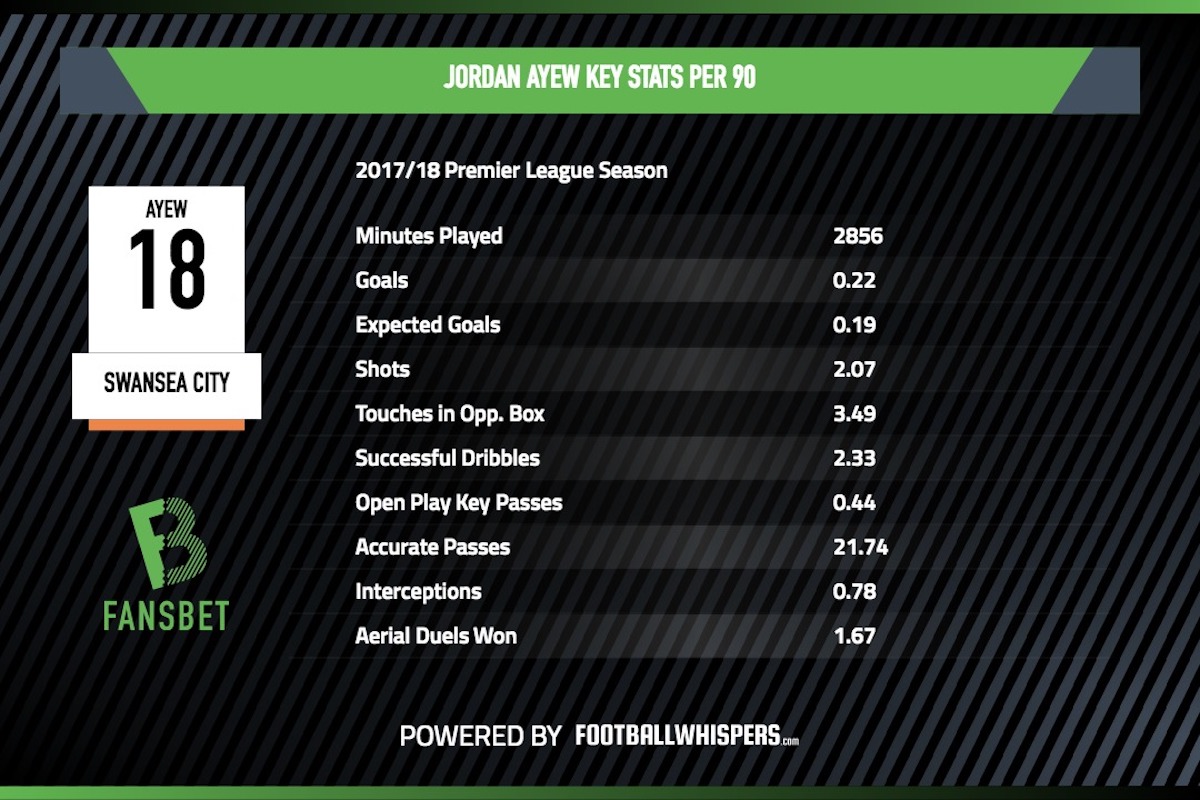 What are Ayew’s strengths?

After a tricky and ultimately doomed league season, Swansea were relegated from the Premier League and that was largely mirrored in Ayew’s performances over the course of the league campaign.

Although the former Marseille striker has never been prolific, his seven league goals in 36 games is still a relatively modest return.

However, there was plenty to showcase what he could do for Celtic. He won 87 per cent of his aerial duels, pointing to a striker who is comfortable in the air.

Although most of Celtic’s goals in the Scottish Premiership came from slick passing on the ground, many of their chances in European competitions can come from set pieces or more hastily-applied crosses or through balls.

Dembele’s stock at Celtic has largely risen because of his ability to play as a targetman in Europe and if Ayew can do that too then he would be of great use to Rodgers.

Similarly, Ayew’s ability to dribble past opponents is superb. In this season’s Premier League he attempted 74 take ons and succeeded in 97 per cent of them â€“ the seventh-most in the league.

Add to that an average of 2.07 shots per game and you have a striker that may not have taken all of his goal-scoring opportunities this season but certainly did the hard work in making them in the first place. 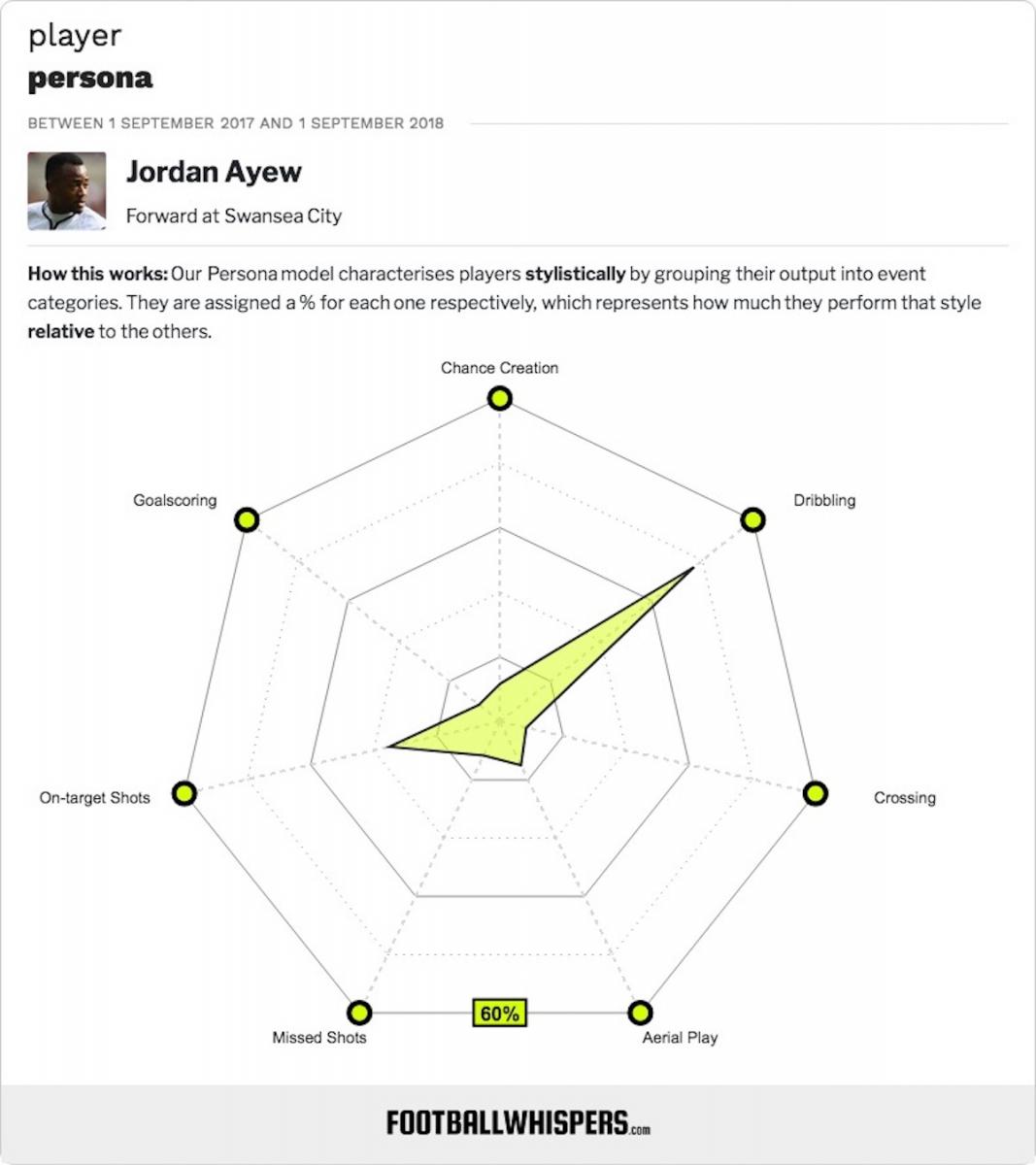 What are Ayew’s weaknesses?

As we’ve already alluded to, Ayew’s goal tally this season was underwhelming and the forward’s xG per 90 stood at at a fairly lowly 0.19. When we compare that to other forwards throughout the Premier League the Swansea striker sits 70th.

However, for context, it is important to note Swansea took just 8.89 shots per 90 in the Premier League this season â€“ no team managed fewer. That will change if he joins a Celtic used to dominating games. Despite that his xG 90 was 0.22.

It should also be noted that despite spending some of the season playing on the left wing Ayew offered little in the way of creatively, registering just two assists from 36 league games.

In summary, then, it’s hard to read too much into Ayew’s numbers for the season as a whole; his figures per 90 give a far more accurate representation of his abilities and, in a poor Swansea team, he still caught the eye.

If he can build on that at Celtic Park he could prove an astute signing. But Rodgers will have to be 100 per cent certain as the Swans forward will come with a Premier League wage packet.