Who wants to see the castle when they visit Edinburgh if the Bully Wee are in town? The Clyde FC Glasgow Branch tell us some tales from their travels.

When your furthest away game is only 170 miles or so from home you’d think each road trip would be pretty similar; but not for the members of the Clyde FC Glasgow Branch.

They make it their mission to enjoy every minute on the road watching the Bully Wee meaning they have plenty of stories to tell.

So we caught up with the guys to find out just what following Clyde is all about and how they go about planning their perfect away day.

How do you normally get to away games?

We take a supporters’ bus which leaves from George Square in Glasgow and then picks up at Broadwood Farm in Cumbernauld.

So what does that usually cost you?

Not a lot as we obviously split the cost so around £15-20 each for a normal trip, plus the cost of the ticket.

And do the trips take much planning?

We usually organise everything around a week in advance of a game. 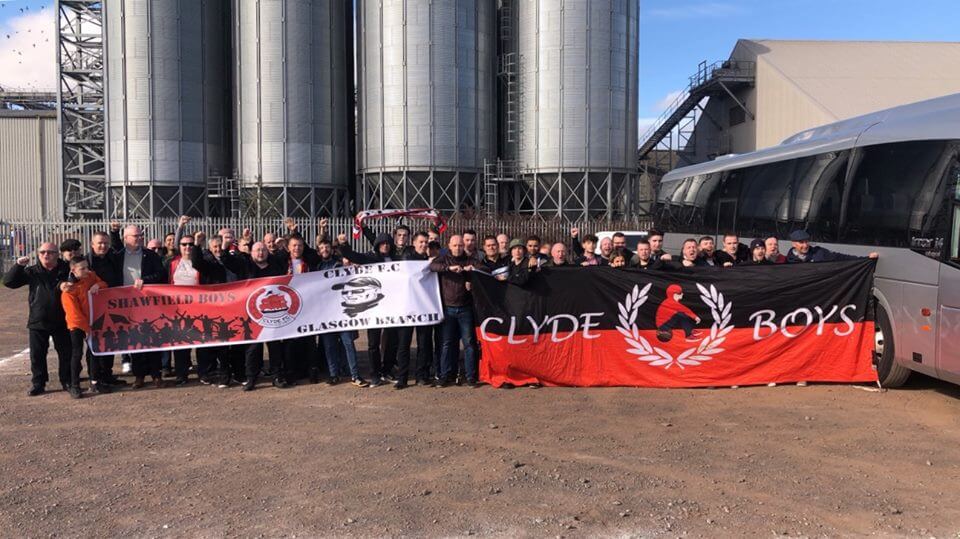 How many people would you normally take to an away game?

What would you say has been your most memorable road trip so far?

It probably has to be Cowdenbeath away last year as it was a game we could have won the league and we had two busses running. There were some pretty incredible scenes outside the ground as we gave the team a great welcome as the team bus arrived at the stadium.

You must have some great stories, any you are prepared to share with us?

We ran a bus for Edinburgh City away last year when we pushing for the League championship and after counting the numbers we had 32 bodies on a 33 seater coach; but after getting off for a quick drink in the Grassmarket, when we returned to make the journey to the ground it was suddenly packed and we didn’t recognise some of the faces.

That’s because there were now 38 people on the bus and a few were actually form Holland who were over to visit the capital and had ditched their plans to come watch the Bully Wee with us; one of which was the first on the pitch when we scored the last-minute winner as well.

He had such a good time he still keeps in touch with the branch now!

About the Clyde FC Glasgow Branch

Formed on the terraces of Shawfield Stadium in the 1970s the Glasgow Branch for many years has been regarded as the “vocal” bus for those who loved their football and beer in equal measure and whose passion for Clyde was only matched by their determination to out sing the opposition no matter where they played.

They run buses to most away games and hold fundraisers throughout the year to make donations to support the club as well as running their own annual POTY year night.

A rollercoaster decade but the future looks bright for Clyde FC