“And Solskjaer has won it!” Manchester United do the treble in 1999

There are domestic trebles and there are cup trebles, but here's the story of how Manchester United won the only treble that counts in May of 1999.

On May 26th 1999 last-gasp goals from substitutes Teddy Sherringham and Ole Gunnar Solksjaer provided the greatest finish to a Champions League final ever.

With the Premier League and the FA Cup already in the bag the win also completed an historic treble which had never before been achieved by an English side with no one coming close to replicating it in the years since.

That United side may not have been the best in Europe. They were nowhere near as dominant as Heynckes’s Bayern; but they had a never-say-die spirit in a season of epic twists and fairytale storylines at every turn which would ultimately be enough to see them over the line.

They claimed the league title on the last day of the season having come from a goal down to beat Tottenham and had squeezed past Arsenal in an FA Cup semi-final at Villa Park with Peter Schmeichel saving a last minute Denis Bergkamp penalty before Ryan Giggs weaved through the Gunners’ defence in extra-time to win the tie in the most dramatic way imaginable.

Ferguson’s men had been drawn in the same qualifying group as their opponents which also contained Barcelona and Danish side Brondby with two thrilling 3-3 draws with Barcelona, two more draws against Bayern and two thrashings of Brondby enough to see them through in second place, one point behind Bayern. 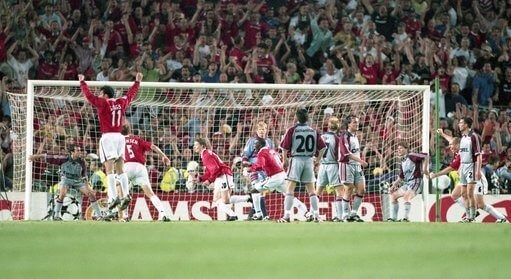 A 3-1 aggregate win over Inter in the quarter-final saw United through to face Juventus in the semis in Turin where Roy Keane, having been booked and knowing he’d missed out if United progressed, almost single-handedly inspired a 3-2 comeback to send them to the final at the Nou Camp.

And it wasn’t just United going for the treble in the Catalan capital that night as Bayern, boasting a team which consisted of nearly all domestic-based players and the backbone of the German national side, had also won the their domestic league and cup meaning the game had even more riding on it than usual as almost 100,000 fans looked on from the vast stands.

United couldn’t have got off to a worse start when Bayern’s Carsten Jancker was brought down by Ronny Johnsen inside after just five minutes and while the Germans stalled over the free-kick, Mario Basler fired a fierce shot as Marcus Babbel broke off from the wall, only for the ball to go straight through the hole where he’d been standing just seconds earlier.

The Bundesliga side were now in control as Mehmet Schol’sl chip hit the inside of the post and then ten minutes later Carsten Jancker’s mistimed overhead effort hit the underside of the bar as it looked like an exhausting season had finally caught up with the Reds who were missing Paul Scholes and Roy Keane to suspension.

But United had never given up that entire season, a mentality which had seen them mount epic comebacks on all three fronts and they weren’t about to start now so ss the game entered the final minutes their pressure was relentless as they created chance-after-chance.

“If they equalize I think they’ll go on and win this,” said co-commentator and former United boss prophetically as they laid siege to the Bayern goal.

Going into three minutes of injury time the goal still hadn’t come and as United forced another corner Peter Schmiechel galloped up the field and into the Bayern penalty area for what everyone believed would be one last attack.

When Beckaham’s corner eventually came across it looked like Bayern had cleared the danger, only for the ball to drop to Ryan Giggs on the edge of the penalty area… “Beckham, in towards Schmeichel, it’s come for Dwight Yorke… Giggs with shot… Sheringham! Name on the trophy,” yelled Tylsdsley almost in disbelief.

The story goes that, as his coaches began preparing for extra-time, Alex Ferguson told them they needn’t bother such was his belief that his team would win the match without the need for the extra 30 minutes.

“We believed in ourselves. I believed in myself and my abilities. Of course I didn’t think it was over. Coming on then I knew they were tiring and I was more likely to score,” Ole Gunnar Solskjaer who was thrown on for Andy Cole with nine minutes left later explained.

And after taking the ball into the corner from the kick-off United won a corner almost immediately. “They must be playing defensive, Schmeichel’s not coming up for this one,” said Ron Atkinson with his tongue well and truly in his cheek. Meanwhile Clive Tylsdley said what everyone was thinking by this stage: “You have to feel this is their year.”

Beckham again took the kick, which was met by Sheringham, who nodded the ball down across the goal: “Beckham… into Sheringham… and Solskjaer has won it!!”

The goal was timed at 92 minutes and 17 seconds and Solskjær, who had been so pivotal as an impact substitute throughout the season celebrated by sliding on his knees in front of the thousands of United fans behind the goal. 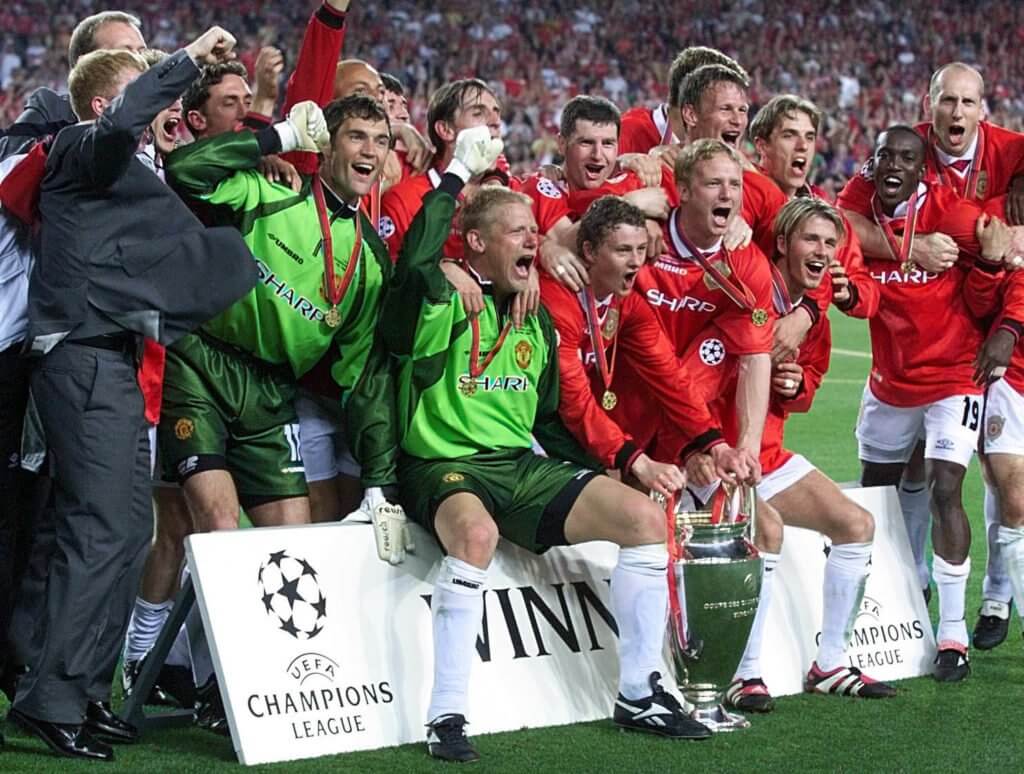 There was barely time to restart the game and when the referee eventually did blow the final whistle the Bayern players slumped to the ground, almost in disbelief had what they had witnessed; referee Pierluigi Collina even had to help several get back to their feet.

And it wasn’t just the Bayern Players who thought they had done enough. Bayern Munich ribbons had already been tied to the trophy in anticipation of the presentation ceremony such was the confidence that the game was over; something which David Beckham remembers well.

“I looked around and saw the cup being carried down to the pitch with Bayern Munich colours on it,” he later explained. “Two minutes later, I had it in my own hands and it was ours.”

As Clive Tylsdsley said on the night: “Nobody will ever win a European Cup final more dramatically than this,” and who could argue with him?