We’ve all heard the clichés – “betting with a difference” “putting the fans first” “gambling but not as we know it” well what if there was a bookmakers who used more than tired old sayings and were truly committed to giving something back.

FansBet was founded on three simple principles, about fans, by fans, for fans, but what does that even mean? FansBet was started by a group of passionate football fans who love their clubs, love a bet and wanted to combine the two passions, so they did.

The FansBet team is made up of football, boxing, golf, tennis, cricket and horse racing fans – we’ve even got a wrestling fan too, but don’t hold that against him, he’s a good lad really.

It’s not just sports fans who make up the FansBet team, some of the leading industry experts in horse racing, some of the biggest stars in football and some of boxing’s brightest prospects are all part of the FansBet family.

Whether it’s former England goalkeeper Paul Robinson giving us his take on the Three Lions’ next game, Super middleweight World Boxing Champion Callum Smith offering us an exclusive insight into his training regime or award-winning horse trainer Amy Murphy giving us a behind-the-scenes look at her stables, FansBet has a unique pool of ambassadors. 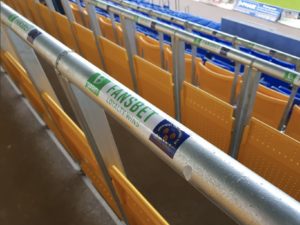 How does FansBet work?

The main ethos of FansBet isn’t just fans working together, it’s giving back and that’s where we truly differ as we’re the only bookmaker committed to sharing 50% of net profits directly with the fans.

When you sign up to FansBet you’re asked to choose a branch, or supporter’s cause you want to be affiliated with, when you win you collect your winnings as usual, when you don’t win, your chosen cause receives funds, equivalent to 50% of our profits.

A quick look over our odds and the bespoke special bets we create for our fan partners will show that we’re highly competitive and in many cases offer the best odds available on certain games and events.

Once our fan partners have signed up, anyone who opens a FansBet account and chooses them as a beneficiary will see a share of profits going directly to that fan partner. That way you’ll be helping an initiative that’s supported by them and in turn you.

Why bet with FansBet?

There’s never a guarantee of winning when you place a bet, but with FansBet there is a guarantee that your money can go towards causes that matter to you.

There’s no other bookmaker dedicated to working together with fans, to help fund causes that can improve the matchday experience of supporters across the UK.

What have FansBet achieved so far?

Over the past 18 months we’ve signed up dozens of fan partners with all manner of causes, ranging from helping fans get to away games, to building safe standing areas in the ground.

From working with a range of fan partners, we see first-hand how it’s often a small group of volunteers giving up their time, energy and whatever money they can spare to help fellow fans of the club they love. At FansBet we’ve shown them, they don’t have to go it alone.

Our, sorry, your money has already begun to make a difference – and that’s a fact, not a cliché.

FansBet is the only bookmaker committed to sharing 50% of net profits directly with fans.