FansBet takes a look at who could be taking home the Wanamaker trophy this year.

For the last time the PGA Championship will be the final major of the year as it moves to May in 2019. Bellerive Country Club in a hot and humid Missouri will host the 100thedition of the championships and it sticks to the mantra of testing the field on a stretching golf course. However, where bombers usually dominate at this major, there will be an emphasis on controlled power hittingat Bellerive with the rough particularly penal for those wayward off the tee. Furthermore, the mid-west track possesses unusually large greens with multiple contours so accuracy in approach playis key with three-putts easily coughed up.

The best iron players will populate much of the leaderborad, but the putter will be vital in determining the champions with each winner in the last decade ranking inside the top 23 for putting average, eight of which were inside the top 10.

For all of the latest FansBet PGA specials click here

Key Trends & Who Fits them

The PGA is usually a good week for trends with but before getting to those we can narrow our field to 50 players as each of the last 27 major winners have all ranked inside the world’s top 50.

Two trends really stand-out at this tournament. Firstly, since becoming the warm-up event in 2007 the WGC Bridgestone has been a fantastic guide for the PGA with every winner lining up there and each recording a top 28 finish. Secondly, 16 of the last 19 champions had already won that season. 11 of the world’s top 50 meet both with unsurprisingly many of them amongst the favourites for this week, but there two we can’t ignore.

Dustin Johnson is the best player on the planet at the moment and excluding the Open – where we’re happy to forgive a result as links golf is such a different test – he hasn’t finished outside the top 17 in a stroke play event this season, going 8-1-3-1-3 across his last five. His new putter was on fire over the weekend at WGC Bridgestone and the stats he has excelled in this season fit very well with Bellerive.

Not only is his length off the tee a huge advantage there are few more accurate and he is streets ahead of his closest rival in Strokes Gained off the tee this season.

Furthermore, he is ranked inside the top 10 for Strokes Gained approaching the green and is second in three-putt avoidance, both of which look crucial to success here. Given his talents, DJ certainly should have won more majors over the last few years, but he looks primed to double his collection and is a worthy favourite. 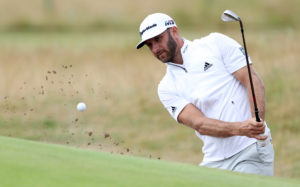 Johnson is one of the main contenders for the PGA Championship.

There is also a strong case to be made for Brooks Koepka given his major record and Justin Thomas whom we deem as the main danger to our picks given what he did at Firestone last week, but the other selection is the less fashionable but straight hitting Webb Simpson at an inviting price.

The 2012 US Open champion joined a select group of players to have won both a major and a Players Championship this year with the most convincing of victories at TPC Sawgrass. That success bodes well for this week as accuracy is essential for both courses while he lead from pillar to post and 11 of the 18 PGA winners this century led going into the final day. Like DJ, Simpson’s stats reflect well for Bellerive as he is the only other player to be ranked inside the top 20 for SG approaching the green and three-putt avoidance. Furthermore, he’s having his most consistent season for years, especially in the majors, where he’s come a career best 20that Augusta, 10thin the US Open and a career best 12that the Open and he looks set to challenge for a second major title.

Can Justin Thomas win the PGA Championship for the second year running? He’s at 15/1 to win*

The PGA is also renowned for being the tournament where players break their major duck. Thomas was the 14thto do so in the last 21 years with McIlroy the only previous major winner to succeed in this tournament since 2008. None of the last nine winners had made more than five PGA appearances before their success either and there a few we fancy in this category.

First up, Tommy Fleetwood’s meteoric rise has firmly put him in the major scene in 2018 with results of 17th, 2ndand 12thvery respectable. His long game has been sensational this year, combining power with accuracy and he ranks in the top 10 for SG tee to green. The Southport man ticks all the boxes having won back in January on the European Tour and he followed up his sixth at the Canadian Open with a 14that Firestone so arrives in great form. If he can avoid that tournament ruining round, then Fleetwood will go close and is excellent each-way value. 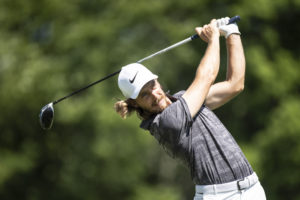 Could Fleetwood be this year’s winner?

Another very consistent iron player is Patrick Cantlay who ranks 8th in SG tee to green this year and like Fleetwood he won back in the early part of the season. His form is red hot with four top 15’s in his last five events, with the exception at Shinnecock Hills which will be a very different test to here. At one point he looked like the only man to challenge Thomas last week before fading, but a promising four days have put him in great stead for this week.

We’ve backed the 2018 Players champion and we’re also putting up the 2017 winner at a massive price. Si Woo Kim has proven he can win in a quality field and his form figures leading in read an improving 67-29-10 with the latest at the WGC Bridgestone and placing back inside the world’s top 50. He won The Players last year off the back of an encouraging 22nd at the Texas Open and he came second at the Heritage in April after a promising 24th at the Masters and the South Korean looks fit to go well again this week.

*odds are subject to change

Winning Formula: The fine margins of the PGA Tour

Pebble Beach Pro Am: Mickelson can make it six of the best